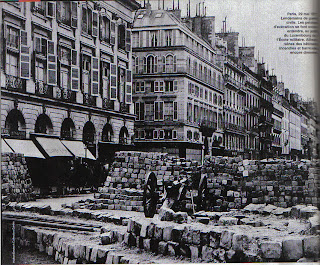 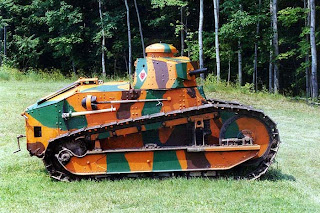 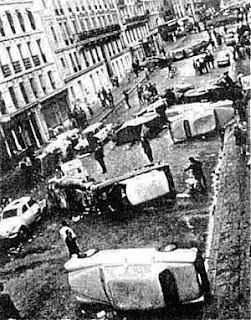 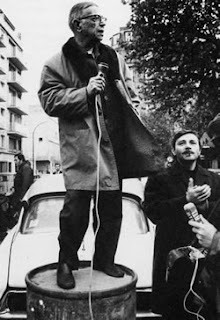 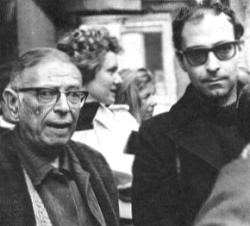 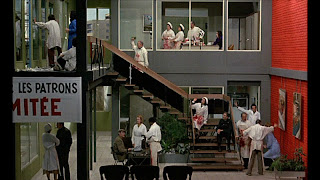 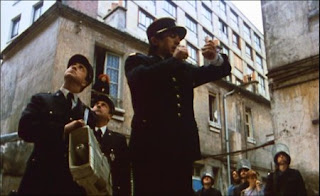 Above is a fun, loose lineage of some things I have been thinking or reading about: Paris Commune barricades, 1871; a Renault tank from WWI; overturned cars on the street from May '68 riots; Sartre addressing workers at Billancourt, the major Renault factory; Sartre and Godard, May '68; a still from Godard/Gorin's Tout va bien, based on the Renault/Billancourt strikes; a still from Themroc, wherein Michel Piccoli stages his own private Commune (and gets the State angry at him for his troubles). While the images may be offered as there for your casual perusal, and are not of course a serious or profound argument of any kind, they are pointing towards serious questions. The automobile has played such a major role in modernization and, as such, it has been a locus for some of the defining characteristics of our modern dilemma--industrial pollution, consumerism, fossil fuel geopolitics, mobility & travel, labor exploitation and labor-management disputes. Car culture and cinema culture, or more broadly modern travel and modern media (both of which have necessitated certain innovations in commodification and perception), deserve some more vigorous conceptualization and application in history, cultural studies, film studies ... or if the literature is ample (a possibility), then I would like to find it and read it.

Some films to think about and maybe see again: Il Sorpasso (Dino Risi, 1962), To Catch a Thief, La Jetée, Images of the World and the Inscription of War, Playtime, Godard from '67 to '76, Red Line 7000, Sex and the Single Girl, The Big Mouth.

This is just a beginning. I would welcome suggestions on things to read and watch with regard to changes in economics, culture, consumption, perception, and aesthetic reimagination in the postwar era.
Posted by ZC at 7:20 AM

for post-war aesthetics and consumerism, watch AMERICAN LOOK, a tribute to designers that is really designed to make the populace drool over all that money can buy:

oops, this is the link: AMERICAN LOOK

Thanks, Shahn, I'll check it out tonight.

Strange thing about Ross's book--I read the first 37 pages, then on page 38 she mentions Schivelbusch, and also goes into some of the exact problems of perception & commodification I am concerned about. Sometimes it's great when a book addresses exactly what you want it to ...

It's Phil, Paul's brother. I can recommend some books in the direction of intellectual history/French political-cultural history:

-Besides Ross's FAST CARS, there's her MAY '68 AND ITS AFTERLIVES. It's less trenchant and evenhanded than the earlier work, CARS, but it's worth checking out. By the way, I find Crary's work very interesting.

-Julian Bourg, FROM REVOLUTION TO ETHICS: MAY 68 AND CONTEMPORARY FRENCH THOUGHT, especially it's very well done opening chapter giving an overview of French commentators' various interpretations of '68 up to the present; good coverage of the philosophical trends of post-68 France and their sociopolitical context (esp. in situating the shift from Sartre to Foucault, Deleuze, and neoliberalism)

-Martin Jay, DOWNCAST EYES: THE DENIGRATION OF VISION IN 20th CENTURY FRENCH THOUGHT, a mammoth synthetic work that draws out a philosophic/aesthetic throughline in French modernist and postmodernist thought; useful for overviews and judicious bibliographic footnotes

-Mark Poster, EXISTENTIAL MARXISM IN POSTWAR FRANCE, dated a bit (published in early 70s) but good on French Marxism from WW2 to '68

Hi Zach, I have a cinema-related request, but I can't find an email for you on the site. Could you email me at infinitethought[at]hotmail.co.uk when you get a chance?

I enjoy this site very much.