On the New, or Second, Life 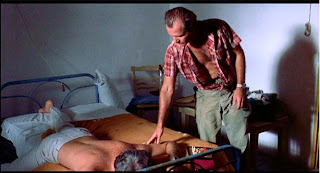 When Jack Nicholson's Locke enters the hotel room and finds "Robinson" (his double) dead on the bed, we actually see his reaction, his gaze, before we see Robinson's (faceless) corpse. Later in the film, when Locke reaches his room, another hotel room (his "terminal" hotel, his destination in a sense) we see Locke looking before we see the person at whom his look is directed. Yet again we do not see the initial face. 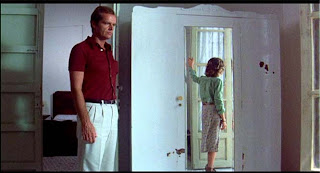 The death is not Maria Schneider's this time, though she is the object of Locke's gaze: in his bid for a new life Locke has assumed the role of death (he's wearing the "dead man's shoes" so to speak). But the doubling that Locke initiates has repercussions that continue into the world beyond him--like the doubling of the woman figure. He doesn't, obviously, "create" either woman. But his actions now link them, provide them with a particular relationship beyond that of simply having a contact in common. 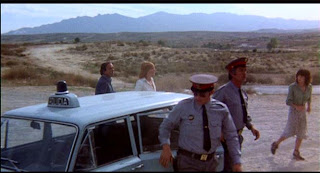 "When the souls arrived at the light, they had to go to Lachesis right away. There a Speaker arranged them in order, took from the lap of Lachesis of number of lots and a number of models of lives, mounted a high pulpit, and spoke to them. "Here is the message of Lachesis, the maiden daughter of Necessity: 'Ephemeral souls, this is the beginning of another cycle that will end in death. Your daimon or guardian spirit will not be assigned to you by lot; you will choose him. The one who has the first lot will be the first to choose a life to which he will then be bound by necessity. Virtue knows no master; each will possess it to a greater or less degree, depending on whether he values or disdains it. The responsibility lies with the one who makes the choice; the god has none.'" When he had said this, the Speaker threw the lots among all of them, and each--with the exception of Er, who wasn't allowed to choose-picked up the one that fell next to him. And the lot made it clear to the one who picked it up where in the order he would get to make his choice. After that, the models of lives were placed on the ground before them. There were far more of them than there were souls present, and they were of all kinds, for the lives of animals were there, as well as all kinds of human lives. There were tyrannies among them, some of which lasted throughout life, while others ended halfway through in poverty, exile, and beggary. There were lives of famous men, some of whom were famous for the beauty of their appearance, others for their strength or athletic prowess, others still for their high birth and the virtue or excellence of their ancestors. And there were also lives of men who weren't famous for any of these things. And the same for lives of women. But the arrangement of the soul was not included in the model because the soul is inevitably altered by the different lives it chooses. But all the other things were there, mixed with each other and with wealth, poverty, sickness, health, and the states intermediate to them.


"Now, it seems that it is here, Glaucon, that a human being faces the greatest danger of all." 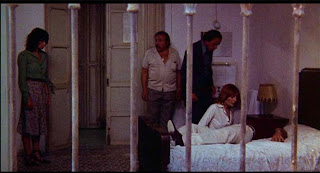