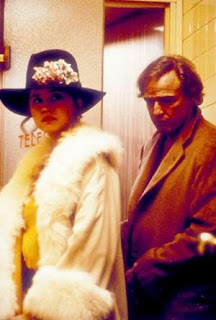 Ennui. Is it just me, or is it the case that--when it's not filmed in black-and-white--it's filmed with a lot of warm colors? I am not willing to put money on this as a quantifiable assertion, mind you, but hear me out at least and let me know if you ever feel the same phenomenon I'm trying to put my finger on. I'm thinking of Antonioni in color, of the moral back alleys in some parts of Ferrara and Scorsese (or Cassavetes' Chinese Bookie), of Last Tango in Paris, of the dry Italian landscape in Gianni Amelio (or at least the few Amelio films I've seen). Whenever long takes are meant to indicate a crisis, it seems like a good idea to put reds, pinks, yellows, oranges, and tans into the the mix. I think this may be the case because despite all other "minimalist" adornments within our accepted signifying codes, the warm (womblike? honeyed?) tones cue us in to a problem. A shorthand for the notion that 'something is not right,' not quite in the same way that Pedro Costa means it though ... but something potentially pre-political, pre-intellectual, insofar as we're talking about artistic intent. (If a color scheme is indeed "womblike" shouldn't that take us to the moment of our very first "trauma," at least according to some interpretations?) Perhaps the formula is a sense of ennui, directionlessness, stagnation which is treated with warm colors when the subject matter is mixed with very powerful drives: of violence, greed, sexuality, frustrated kindnesses (the kindness of Amelio's heroes), of something with one Dionysian foot and one Christian one. Perhaps it is meaningful that all of the examples I've just listed above (without premeditation) are Italian or Italian-American. At any rate, if red-and-black and fast cutting are generally meaningful of a very intense cinema, a cinema of intense energies (like those sexual or violent), could this be like the long-take stretched-out mellowed sustain of the same kinds of "notes and chords"? See also this older post.
Posted by ZC at 10:49 PM

this is a lovely thing to contemplate Zach. Your ennui/color examples are all from the seventies or filmmakers who "continue" the seventies (Scorsese, Ferrara) -- there would be filmstock changes, too, to consider and filmstocks in today's films are so thoroughly up for grabs that its hard to identify as a assertion in any sense -- but my only contemporary exception to your verifiable trait is Hong Sang Soo, who seems to define ennui, though in broad flat colors, no shadows, more clinical. Somewhat aside from the subject of ennui but close to your thought about womb signifiers, "frustrated kindness", and two-legged Dionysian/Christian monsters (but unclassifiable in terms of color) is the transformation scene in THE NUTTY PROFESSOR. In it Lewis is between Kelp (frustrated kindness, boredom) and Buddy Love (all is right and snappy with the world) -- he knocks over the chemicals in a blood-like umbilical shape and crawls on the floor like a return to childhood; the whole scene, which is not a crude dramatic fulfillment but a violent terror-filled inbetween state suggesting a catastrophe in the stuff of narrative (personal/psychological and dramatic), is the opposite of the soft golden ruins of the ennui films. And Lewis has the balls to follow that sequence with a long take in warm colors (of Buddy Love's pov in the street)!

Would this be a contribution to the 2nd Contemplative blogathon? ;)

The filmstock color conservation would be a good reason indeed.
The typical color taste of this timeframe should be considered as well. Pretty much any film in the 70ies used psychedelic colors and kitsch coordination. Then the 80ies used heavy neon-colors (Verhoeven, De Palma, Scorsese, Jodorowsky, Lynch, Almodovar, Fassbinder and even Kieslowski) for the same ennui.
Just a random thought.

Fascinating idea. I think you got it right when you nailed the filmmakers and the era this trend exists in. Because, in my mind, from the 1980s on, ennui is signaled through the similarity of color films to black and white ones: clinical chiaroscuro, drabness, flatness, negative or empty space--Antionioni's influence starting to really be felt. I'm thinking of the works of postmodernism and globalization, works by Tsai and Yang most especially.