Materials of Paint and Bodies

"While the words luxury, calm and sensuality could also be used to describe them, in formal terms Modigliani's nudes are much more closely linked than those of his French and German contemporaries to traditions within art history. In their technique alone, but also in their composition, his nudes betray a clear orientation towards the masters of the Italian Renaissance, towards Sandro Botticelli (1445-1510), Titian (1488/90-1576), and Giorgione (1477/78-1510). Modigliani thereby reached back to a pre-academic chapter of art history, to a time in which a naked Venus or Danae--to name only the most prominent models--were not rendered according to a catalogue of dictated poses. Instead, their composition was above all indebted to the iconography of an underlying history and the invention of the artist who portrayed them.

"Modigliani, who never went to a state art academy, approached the portrayal of the naked body with an eye that was schooled more by art history than by an academically-shaped perception of the nude. While he may have learned the fundamental, academically-normed concepts of lifedrawing in art schools in Florence and Venice, he may certainly be assumed to have encountered alternative approaches to the study of the nude during his time at the Académie Colarossi in Paris, where he enrolled in life-drawing classes in 1907 and 1907. The Académie Colorassi in Paris was one of the private institutes, founded at the end of the nineteenth century, which offered a progressive alternative to the state academies. ... Unlike the state academies, here one attempted to achieve more animated expressions." 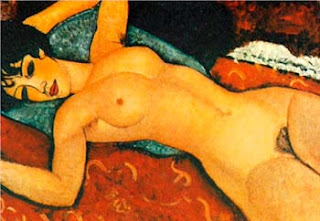 The compositional, textural, and color considerations of Modigliani paintings, particularly his nudes, never seem to work in antagonism to the image as a representation. He's the great sensualist of the early 20th century. 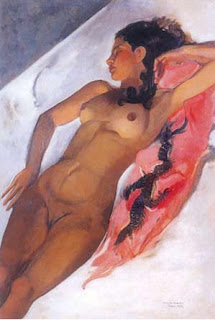 Sher-Gil is a fascinating figure I just learned a bit about recently. Sikh-Hungarian, a moneyed, Westernized Indian woman who lived too short a life and whose devotion and erudition regarding painting (as vocation) were exceptional for her circumstances. When I first saw the image on the left, I was struck by its parallels to Modi. (Recommended reading: Geeti Sen's sumptuous volume Feminine Fables: Imagining the Indian Woman in Painting, Photography and Cinema, 2002. I've only flipped through the book, myself.) Some writing by Sen--this may have been reproduced in Feminine Fables, actually:

"The woman as an object of vision, a sight. Images of the reclining woman are so numerous that they constitute in themselves a genre of painting. In Europe, every great artist had been preoccupied with this theme — from Titian’s celebrated Venus of Urbino in the Uffizi Gallery to Rembrandt’s study of his wife Saskia and Goya’s infamous Naked Maja in the Prado, to Manet’s insolent stare of Olympia which created a sensation in the 19th century. Mythology and life studies became a pretext to focus on the erotic body of the model, lying naked on a couch, her warm flesh against pale silk sheets, looking out to engage the viewer. "In India, this theme was equally popular in Rajput court painting: projecting the nayika on a bed awaiting her lover, or locked in embrace with him. From the 19th century, there is a sudden change in emphasis. The heroine is no longer part of narrative from the Gita Govinda or the Rasamanjari. Instead she becomes the sole subject for our attention: as a courtesan reclining and playing with her cat, or a woman stretched out naked against yellow bolsters — like a delicious dish served up for consumption.

"Sher-Gil was certainly aware of these precedents in the West and in India, to which she returned in 1935 to begin a new phase in her life — and also, a different sensibility in painting. As a student in Paris, she must have been acquainted with Manet’s infamous Olympia as one of the most daring expositions in 19th century painting. In her travels south to Trivandrum, she encountered and wrote critically about paintings by Raja Ravi Varma. So when she takes up this theme with her Woman Resting on a Charpoy, it would seem that she is deliberately returning to these two pictures as her point of reference. My suggestion is strengthened by the fact that she introduces an identical composition — in the contrast between the younger woman stretched out on the charpoy and taking her siesta and the darker, older woman fanning her mistress. Manet used this contrast first by using an elder black woman holding a basket of fruits — to show the younger white woman to advantage. This was assiduously emulated by Ravi Varma, who excelled in merging Indian tradition with Western technique in oil painting."

Recall Franco Moretti summarizing the importance of the development of the novel in the global periphery, its common (national) characterization regarded as a compromise between local material and Western form. It's not always a matter of simply art historical influence, of formal application, an outward emanation from (e.g.) France to (e.g.) India. Let's keep in mind the activity of appropriation, which involves more agency--the people of "the periphery" are not oppressed ciphers but combatted, exploited agents.
Posted by ZC at 10:05 AM

Thanks for these quotes - I'd love to read Sen's book someday.

I also only heard of Shergil's paintings - her studies of the contemporary female form - quite recently. It seems she painted her most interesting works later in her short life. There are some interesting contrasts between her work and Ravi Varma's paintings as well - the latter's style reminiscent of 17th century Dutch paintings with subjects from Indian mythology. I've actually seen some good replicas of his paintings.

Another major figure in modern Indian art who has explored "the woman as an object of vision" is MF Husain (who is also, quite possibly, India's oldest working filmmaker today), whose female subjects seem to be an intense amalgamation of mythological and popular contemporary figures. He's painted the glamorous Bollywood actress, Madhuri Dixit, and even directed her in a film (Gaja Gamini) based on his paintings.

Hey thanks guys.
Dirty secret: I've only heard of Shergil and MF Husain and don't know their work. (Bad Indian!) This gives me the impetus to go search it out!

Oh my god, there's a lot of helpful info above!