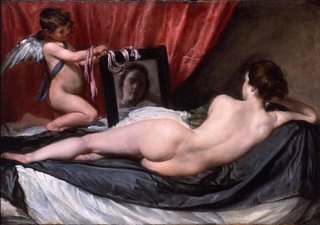 "This nakedness is not, however, an expression of her own feelings; it is a sign of her submission to the owner's feelings or demands. (The owner of both woman and painting.) The painting ... demonstrates this submission ..."

The above image is the figure of a woman who exists for no more reason than the leisurely contemplation and enjoyment of her own beauty, i.e., the satisfaction of herself not as self but as an object of sight. I haven't done enough research to make an educated guess on Velázquez's motives, but regardless of them, I can suggest that the image offers a way out of the unsavory tradition of the Western nude: that by presenting the woman's back to the spectator, and the face as a blurry reflection (also optically impossible), this Venus is presented as obviously an object, immediately and apparently an image for our pleasure and consumption. An iconographic explication of the presence of the mirror might indicate the theme of vanity ... but we can't intuit any emotion or thought to this Venus. She's gazing into a mirror, taking in her own beauty and objecthood, but we are not presented with psychological evidence of her (moral failing of) vanity. She is Image: her Imageness is manifest.

Idle speculation: I have not yet read Deleuze on the Baroque: but if the Baroque is marked by some kind of figure of "the fold," is the productivity of our latter-day engagement with the Baroque marked by our willingness to 'unfold' what was hidden in the folds? That is to say, in the complexity of (say) an image, an oil painting, in the later 17th century, might the interest to us, post-contemporaries, be in the accordion-like flexibility that this furled-up information pack (or stream) provides us? It's what I'll be thinking about in the future. Maybe I'm completely wrong. 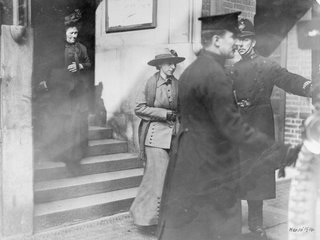 Above is an image of Mary "Slasher" Richardson, who attacked the Velázquez with a meat cleaver in 1914. She was a militant suffragette; according to this white nationalist forum page she was also a supporter of the British Union of Fascists and National Socialists.
Posted by ZC at 9:53 PM

I like your painting posts.
Is it your personal interpretation or a deconstruction of the interpretation? I'm not sure what you mean with the "fold" thing (literal or metaphorical?)

To address your comment, the model is "meant" to be the goddess Venus, so vanity is her symbolic attribute, she is a shallow archetype. Now I guess you refered to the image of women in Catholic Spain of that time...

It would be interesting to compare this painting to these two posterior nudes : La Grande Odalisque (Ingres) and The Odalisque (Boucher), or also about woman narcissism : Susannah Bathing (Tintoretto). What do you think?

Harry--yes, the vanity is present on an iconographic level (the mirror is also an image-trope denoting vanity). But I'm saying that the painting, whether Velazquez does so willingly or not, may offer us a way out, because even though it's meant on one very obvious level as an image of vanity, a survey of female nude beauty (our survey and presumably also Venus'), the fuzzy painting of the face, the fact that the face itself is almost 'disembodied' and is (despite the "Venus effect") looking at us, that her back is to the spectator ... in other words, one can appreciate the painting in a way contradictory to its iconographic presentation, via means of modernism. (I admit, I'm not saying anything special or groundbreaking with this observation. I just think Velazquez holds up well to historical recontextualization if we choose to engage in it.) Some months ago I wrote some notes for myself on this painting, the Ingres you linked to, and one other (Manet's Olympia)--perhaps I'll revise them and post them here?

So I suppose it's "my personal interpretation" but it takes into account, and tries to react against, a certain other (and iconographic, and to an extent testable) interpretation.

As for 'the fold,' as I said, I've never read Deleuze on Leibniz and the Baroque, so my account is thirdhand and sketchy at best, but: as I understand it, Deleuze sees Baroque philosophy as positing the world as extremely complex, that "monads" or conceptual units are enmeshed in a much larger and more complicated structure. (Deleuze may draw this concept of 'the fold' from painting, too--and artists' characteristic rendition of clothing or drapery--I don't know. The only Baroque I'm at all familiar with is painting, not philosophy, sciences, literature.)

The English translation publisher's page for the book states:

In The Fold, Gilles Deleuze argues that Leibniz's writings constitute the grounding elements of a Baroque philosophy and of theories for analyzing contemporary arts and science. A model for expression in contemporary aesthetics, the concept of the monad is viewed in terms of folds of space, movement, and time. Similarly, the world is interpreted as a body of infinite folds and surfaces that twist and weave through compressed time and space. According to Deleuze, Leibniz also anticipates contemporary views of event and history as multifaceted combinations of signs in motion and of the "modern" subject as nomadic, always in the process of becoming.

So, as I said, this idle and basically uninformed speculation on my part is really a way of wondering if the Baroque "fold," if it means something like what I understand it to mean, can be "unfolded" by us in the present day, so that is why I can feel satisfaction in treating some Baroque paintings (like Velazquez's, or Hals') in rather modernist terms?

Is she looking at the painter really? I thought her eyes in the mirror looked to the right. Let's say the orientation of the mirror is a convention, a licence. (The mirror itself is not facing her). The real optical absurdity is the zoom on the face which should appear smaller because farther than the back of her head.
But the inclusion of a mirror is familiar to Velazquez, usually it's a way to fit himself in the painting (like Dali).
This "Venus Effect" in cinema is very interesting though, I'm always amused by the vampire-cameraman trying hard to avoid the reflection in a mirror (or windows). Cinema is afraid of mirrors, and when there is one on the set, we can feel how the whole blocking of the scene is constrained by the fear of the reflection.
Yes please, share your notes on these paintings. I'll be delighted to read them.

I didn't read these texts either, so I don't really understand what it amounts to there... sorry, I can't follow well. Like I said your analysis sounded more philosophical (deconstruction) than pictural (which was my approach).
What I take from this painting is the daring "pornography" of this posterior, at the same time very pudic in that she hides her frontal nudity, while offering a tempting ass in a very sexual abandon (like in the paintings I linked). The texture of her skin is also far from the idealized perfection of a goddess. On the contrary very human and very palpable. The ambiguity between social/artistic vertues and this overt pornography.