"--It isn't easy to live as though what happened in another age were real. Yesterday when the fog overtook us in lonely country, and a couple of stones tumbled down from the hill to our feet, we didn't think of divine things or a fantastic encounter, but only of the night and the hares we had startled. Who we are and what we believe emerge when we are confronted with hardship, in the hour of risk."

"The brooding, underlying fatalism in Pavese is ideological only in the sense that he sees it as an inevitable point of arrival. The hilly area of Lower Piedmont where he was born ('la Langa') is famous not only for its wines and truffles, but also for the crises of despair which are endemic, constantly afflicting the peasant families. It could be said that not a week goes by without the Turin newspapers reporting the story of a farmer who has hanged himself, or thrown himself down a well, or (as in the episode at the heart of this novel [La Luna e i falò]) set fire to the farmhouse with himself, his family and animals all inside." 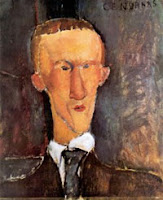 (Above: Modigliani's Portrait of Blaise Cendrars and The Little Peasant, both 1918)

"How all things are vanishing swiftly, bodies themselves in the Universe and the memorials of them in Time; what is the character of all things of sense, and most of all those which attract by the bait of pleasure or terrify by the threat of pain or are shouted abroad by vanity, how cheap, contemptible, soiled, corruptible, and mortal: thse are for the faculty of mind to consider. To consider too what kind of men those are whose judgements and voices confer honour and dishonour; what it is to die, and that if a man looks at it by itself and by the separating activity of thought strips off all the images associated with death, he will come to judge it to be nothing else but Nature's handiwork. But if a man fears Nature's handiwork he is a mere child; and yet death is not merely Nature's handiwork, but also her well-being. To consider also how mortal man touches God and through what organ of himself, and when that part of him is in what sort of condition."