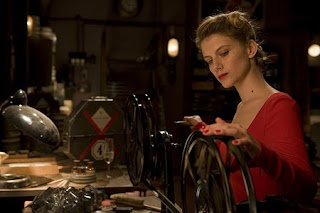 "This movie is not a meditation on anything."
—David Cairns (here)
All historical investigation will reveal skeletons in the closet. Wicked, shameful skeletons in deep, dark closets. No expansive society with clean hands ever survived long. When viewed from the proper historical distance or perspective, however, no injustice retains its resonance forever. This is not my own ethical opinion. But injustices, however great, have a tendency to be forgotten as time moves on.
Imperializing peoples (and not only they) have long been fascinated by violence. Reveled in it. We Americans may be deeply uncivilized on the whole, but we can point to ourselves and say to our credit, at least, that to the individual our fascination with violence is nowadays more invested in mediated and manufactured images than in presence. Is this not some form of "progress"? Torture & executions have been public entertainment in other times and places (indeed including some spots of our own history). By and large, however, American tastes for real violence now are effete, squeamish, highly conditional. Which is not to say that we are not still cruel, or that (bare minimum) our State is not still cruel and wicked. It is.
The Holocaust represents for us a certain limit, an abyss, a chasm or a reminder which History has thrown us. It is evil incarnate; it is the reminder against "relativists" of what evil is. We are taught this way from a very early age. In the Land of the Free, it is even a matter of legal concern if you want to name your child the wrong way. Not that I mention to protest; I simply desire that we openly acknowledge, for a moment, the implicit boundaries set by our ways of delineating right & wrong, permissible & forbidden. To make a statement or artwork about World War II, at least on the European front, is ultimately then to make a statement about the Nazis, which means to make a statement about the Holocaust. This is the doxa. These are the standards that ultimately frame all such things in public discourse. So if you make a quasi-grindhouse movie about a Jewish-American death squad terrorizing Nazi-occupied France, you've volunteered yourself into the crosshairs of gods know how many people with very insistent and very legitimate concerns.
Quentin Tarantino has an incredibly unphilosophical mind, and this is both his strength and his problem. Not even in his most mature work (Jackie Brown) does he really question anything. The root of his cinema is pleasure, a deeply tactile, visceral, and memory-based pleasure for which, presumably, there are no limits worth abiding (in quantity or quality). Tarantino's conception of pleasure is, however, not unsophisticated. One may argue that it lacks refinement, polish, even the rudiments of taste; but it is self-evidently complex, I think, and it is based on attention to details. (People can debate whether they're the right details, of course.) The opening credits of Inglourious Basterds, before the quasi-Leone opening (a decent sequence), are one of the best parts of the film. A procession of fonts & sizes on the title cards—it's lovely. Tarantino is someone who cares about such "peripheral," "paracinematic" stuff. One of the few, but it's this sort of thing that may appear to future observers as witty or even inventive after this chapter in the history of media convergence/(divergence) is written. The culture that lasts is always a culture that remembers the past in some way. Hermetic novelty will die a pitiful and lonely death (and most of the time it may even deserve this fate). In this opening Leone-like sequence, the SS detective and "Jew Hunter" Hans Landa (Christoph Waltz) mentions the incredible lengths to which people will go when they abandon dignity.

He has no "dignity," in a certain sense. Or, as the great Mr. Cairns says in the quote with which I've opened this post, this film is not a meditation on anything. Indeed, we may want a meditation, but do not (will not?) get one from Tarantino. Maybe some of us who liked Jackie Brown were led to believe he was capable of one, and that the Holocaust—i.e., the limit which leads to modernity's very abyss!—would coax this dignity out of him in spades. But no. Instead he makes a childish, violent, and irreverent film that receives as much derision as appreciation from the people who comprise this thing "film culture." Why? Well, it's tricky (treacly?)—but while every good film critic is probably a bit of a moralist, not every good film critic is a good moralist. And not every good film critic has the best perspective on things moral, or how they relate to art, to cultural production in its broadest sense, and to the history of style, affect, posture. I do not claim that I have the best perspective, myself. But I do think that maybe I've found hints of the proper trail in the woods, so to speak.

The problem that makes an insignificant but engrossing entertainment like Inglourious Basterds a "problem" at all is that some of us may wonder why such a film is (a) an event, and (b) something which speaks to others, including others we may otherwise respect, even though it seems odious. (In all honesty, I enjoyed the film and am probably among these latter, problematic folks more than I am the concerned citizens.) Well, to answer (a) with a short answer—it's that we live in the society of the spectacle, and the de facto composition of our "critical apparatus" that contributes to such a thing. As for (b), it returns to the question of dignity. Not all cultural production is dignified, and (as with technology) if it's both possible & profitable to do something, it's probably already accomplished or in the works. Entire film industries are predicated on capitalizing not on the bad tastes of the masses so much as the undignified allowances of these masses. I consider myself a semi-dignified young man, and maybe I'd even allow myself to be described as slightly educated ... but I have no illusions that I am above undignified pleasures. I do not mean to state that I, anti-elitist, am "one with the masses," but more precisely, that I, semi-decent person, am nonetheless fascinated by indecent things. And art, broadly defined, always supplies such things. In a broken society these things are integrated in such a way as to function problematically. The "myopic" sort of moralist-critic does not hold these negative capabilities in mind, and is, perhaps, confused when a major motion picture commands respect (i.e., from the establishment press, the box office, etc.) while not respecting the commands of our social rules of decency, dignity, and order (i.e., it goes there but ... is that really necessary?).

There is much more that could be written—that I could write—about all this, but a few things are clear: that we still are not so stable when it comes to how we conceptualize taste; and that we do not have good outlets for our indecent energies, let alone our critical faculties for same. If we are to point fingers at Tarantino for his indiscretions, his breaches, it may behoove us to point those same fingers at the culture which produced Tarantino, gave him money to make his films, produced an audience that would see it, and produced a community of writers & commentators who would earn money and/or attention in commenting on same.

Old man: "I don't understand the point of this long scene."
Old woman: "I don't either ... but what the hell."

—A couple who were sitting in the same row as me during the tavern sequence.

(I scribble these notes in near-immediate effusion, a few hours after seeing Inglourious Basterds, and may well reverse or criticize my own initial impulses tomorrow. Lately, quick responses to films seen have been at a premium on EL, so I figured that if Tarantino's latest could draw out some words, I should write them.)
Posted by ZC at 11:43 PM

Great post - lots to think about. I saw the movie as, in one sense, an example of Greil Marcus' "'No' that becomes a 'Yes'" à la "Belsen was a Gas" or "Holiday in the Sun" - although Tarantino is more prankster than bomb thrower.

I went to see this with my son (he's 19) and we both enjoyed it for what it was - a tarantino film. By that I mean long, elongated, rambling and mostly pointless conversations, rising in tension until BAM! immediate relief brought about by an explosion of horrific violence. Cinematic onanism if you will, in the form of one set piece after another.

The problem is that his films - this latest in particular - seem to be constructed more in order to prolong the 'Cult Of Tarantino' than tell a good story. I remain hopeful that another Jackie Brown is around the corner (I would love to have seen his take on Casino Royale) but someone needs to sit down and point it out to him, rather than pander to his every whim and I doubt that will happen because of the other problem, his biggest audience (my son) loves his movies exactly as they are and unfortunately it really all comes down to the money in the end.

I don't know why Tarantino's dialogue is always labeled self-indulgent and now here, onanistic. In IB all the conversations do serve a dramatic purpose, and what at first seems like minutiae in those conversations, resonates later. All the characters sound different too, with their own mannerisms and such and do not sound like they came from Tarantino's mouth, because then that would be self-indulgent.

Why is Tarantino's specific approach to dialogue treated with disdain, as if its deviating from the 'norm' of what movie dialogue should be like? I think they should be given the same consideration as any other deviation from conventionally made movies like extended shots or even sparse dialogue.

Hey Zach, I am quite inspired by the questions your post has illuminated, and the following paragraph really hits the nail on the head:

"There is much more that could be written—that I could write—about all this, but a few things are clear: that we still are not so stable when it comes to how we conceptualize taste; and that we do not have good outlets for our indecent energies, let alone our critical faculties for same. If we are to point fingers at Tarantino for his indiscretions, his breaches, it may behoove us to point those same fingers at the culture which produced Tarantino, gave him money to make his films, produced an audience that would see it, and produced a community of writers & commentators who would earn money and/or attention in commenting on same."

The phenomena of cause and effect?
Where does cinema end and our culture begin? How are the two influencing each other with our elegant system of mirror neurons, our binocular vision, the CNS . . .?

Perhaps it is an assumption that we require "good outlets" for "indecent energies"? Is cinema an expression of "taste" or of "delusion"?

A quite wonderful review. I sympathise with a lot of what you say.

It raised similar moral qualms in me - more to do with my association with hateful and tepidly drawn characters than with the cold business of truth and fakery and the conundra of history tinkered with.

I see what you mean about Tarantino lacking "dignity". I think, despite the fact that he seems to have established a 'brand' style, he lacks his own voice. His films need more energy. They are distant impersonations, an homage to an idea rather than the embodiment of it.

I wrote my own thoughts on it here: