Normally I include some lists at year's end—a casual reflection of what I saw, and what captured my imagination. But this past year has been my weakest film-viewing go-round in several years, and it included an abnormally large proportion of (a) second or third viewings, and (b) 'humiliation' films that I probably should have seen before 2008 anyway. So I wouldn't be able to give a very fun list with regard to old films. And I barely saw anything worth noting among new releases. This is not a reflection upon the year in cinema; it says everything about my own life and schedule and the fact that the whole second half of this past year has been a cramped and hectic one where I gave up much ground on my cinephilic duties. I did really like Jia Zhang Ke's 24 City, which is a notch or two below his masterful Still Life, but still pretty impressive ... and I think it probably counts as my favorite of the small number of 2008 world premieres I've seen.

What I will do, however, is give a few words on a film that I've chosen from what I saw during each month of this calendar year. These are not necessarily the best or most interesting films I saw in each given month. They're only meant to to pique curiosity, direct attention to interesting films, or perhaps vent a little snark.

February - Lo foo chut gang / Tiger on the Beat (Lau Kar-leung, 1988) - I watched this (on VHS) because I recognized the name of the veteran HK action director. What I remember is Chow Yun Fat cracking a dozen raw eggs into a big glass and then cheerily downing the whole thing. There are also scenes of cops in their underwear out in the streets. 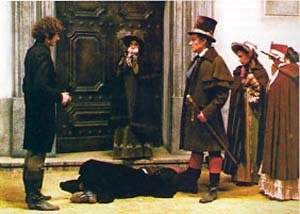 April - Fast Workers (Tod Browning, 1933) - The theme of this minor Browning, a non-horror film, is that "the lady is a tramp." All ladies, really. Still: the movie cuts hard and fast and I continue to remember the unusual tactility of the way it depicts high rise construction.

June - The Frighteners (Peter Jackson, 1996) - A fairly good and solid, though maligned and forgotten, SFX genre film. I had not long before read Michel Chion (on sound and on, well, 2001) ... and something about Chion's way of analyzing films seeped into my head as I watched this and for a few hours I was convinced I would write something substantial about all the interesting little things this modest movie does.

July - When Willie Comes Marching Home (John Ford, 1950) - Olaf Möller has the best word on this: "whoaaaaaaaaaa." It's not top-drawer Ford but his well material is the stuff to make other directors envious.

August - Vicky Cristina Barcelona (Woody Allen, 2008) - In the same month that I fell in love with Anna Faris' amazing performances, what good fortune to have found a comedic run to rival Smiley Face. Penelope Cruz completely owns this movie, which I think is dismal for the aggregative running time without her presence. But when she's on the screen ... "jeen-yoos"!

September - Pictures at an Exhibition (Chris Marker, 2008?) - If you watch this and/or if you read Borges' "The Library of Babel" and feel moved to tears, then you are a kindred spirit. There is something simultaneously sad and tempting about the unfolding of information into infinity, spreading out across time and the cosmos, and the fact that we can contemplate going down those rabbit holes ...

November - Trop tôt, trop tard (Jean-Marie Straub and Danièle Huillet, 1981) - The NYC cinephiles—and beyond!—made it out to this "standing room only" screening of a very bad 16mm print of the Straubs' demanding but also hypnotic and beautiful film. 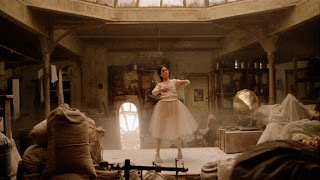 December - Once Upon a Time in America (Sergio Leone, 1984) - For years I have put off seeing this film because I told myself I'd watch it on the big screen. After a number of missed chances, however, I finally bit the bullet and got a DVD. I have liked Leone films a lot before but this is a different level altogether: one of the very greatest movies ever made. With the exception of the casting choice of Elizabeth McGovern (which to me strikes a solitary and unnecessary dissonant chord in the whole giant opus) this is a blemish-free tour-de-force moving forward on all fronts.

I am not certain that I can think of another film that so completely marries classicism with modernism; cinema's dueling inheritances of literature, drama, painting, photography, and (hmmm) probably also the chalky residues of 20th century philosophy of mind; ironic skepticism with spectral, heartbreaking romanticism (in this its peer is Kubrick's best film, Barry Lyndon). I confidently felt this film would be a true achievement at the moment I realized Leone was going to let the phone keep ringing. This is a facility with symbol and metaphor that reclaims them for the cinema. That is, all the rich holdings that lit., painting, etc. have bequeathed to cinema simultaneously have acted as weights and shackles—to the point where it becomes somewhat embarrassing to even speak of metaphor or symbol because that channels back into the pre-cinematic prison house. In its handling of time, its evocation of memory, its transcience across space, the phone is resolutely "cinematic." At the same time there is absolutely no point in praising the employment of that ringing phone if one does not understand what it does, what it means. As far as I know there is a dearth of critical, analytical work devoted to exploring the frontier-space next to conventional and philistine wisdom in this endeavor. There are those who would believe it's all a matter of "form supports story or theme" (a sterile, boring, and wrong premise); and the alternative would invest itself into meaning without recourse to a pre-arranged system or to the invited stigma of "formalism."

(If I am not making much sense it is because I have not yet finished clarifying my thoughts!)

In 2009, I think & hope, EL will shake things up in its own humble nook of the film blogosphere by presenting some counter-arguments, some re-evaluations, and some cross-disciplinary reflections on the medium, the other media, and the world. For the sake of the readers of this blog, all of you whom I appreciate very much, I will do my best to make these further investigations interesting, provocative, informative, enjoyable, and fruitful.

I was glad to see Once Upon a Time in America on DVD after seeing the butchered version that was given a theatrical run.

And I loved John Astin in The Frighteners.

I have a quick question: is film noir is a genre or not? What are it's set of ethos that separate it from other genres or make it not a genre? This question has been bugging me lately. I'm convinced it is a genre, with its own style and content, and yet the definition of noir as it is applied to films seems so loose that you can pretty much label any film with a hint of darkness noir. Somehow I don't think the question is important to understanding the films that are labeled noir.

I too saw Once Upon a Time in America for the first time this month, in a phantasmagoric nighttime viewing of the DVD. I put it on at 2 am with the intention of only watching the first part. 6 am came, the movie ended, and I was unable to go to sleep until the next evening. I haven't quite been able to phrase it. But--the telephone!

I'm currently reading Anastaplo's Abraham Lincoln: A Constitutional Biography and it's proving very illuminating on our previous dialogue concerning the prudence of the statesman.

Peter, I think part of my reluctance to see any video version of Once Upon... was because I was confused about which cuts were circulating. I think I believed that the cuts were comparable to, say, Brazil--that there were multiple cuts of varying official authority. I didn't know until later that there were just the regular long cut and the bowdlerized US release version.

Jake - is film noir a genre or not? I suppose it comes down to the premises--how are we defining "genre"? There's probably an element of reflexivity that comes into question as soon as "film noir" became an accepted and recognized term (hence people could try to produce "film noir" where they hadn't consciously before); depending on these things it could also be a question of stylistic connection across (other) genres--the gangster movie, certain types of romance...

Ignatiy - yes, there's something really mesmerizing about this movie, isn't there? A really powerful film, and easily among the small handful of greatest films I saw for the first time this past year. More will follow on EL about it, I think.

Alex - thanks for the heads-up. I hope to bring that discussion back up in the next few days. As always you are ahead of me on all points of reading, but I appreciate the challenge.

not to forget the cake scene, one of the most tender moments in american cinema... also, the pic you singled out from the film, the framing, the atmosphere, what it conveys, all reminded me of jean-pierre coursodon's pick for the image issue of rouge. I checked it out again and it was less striking, but that was the first thought that entered my head.
Happy new year!
Nathan

This should also be the year in which we finally write something together, Zach. Perhaps I should start by responding to your last Cassavetes letter, though I suspect that boat has sailed. Certainly your desire to get back into blogging is one I share. At the same time, I also keep thinking of Adrian's assertion, in his launch speech for '¿Qué es el cine moderno?', that it is the "'middle range' of film criticism we must commit to, strongly and passionately and vigorously", at least for the moment, which is one of the reasons my blog atrophied a little this year. (That and, well, I've becoming addicted to seeing my name in print.)

Once Upon a Time in America made my day on the 31st of last year as i became bored from thinking ahead to the next year.

I'm not certain whether I find Once Upon a Time in America as appealing as the rest of you seem to. For a film that self-consciously places itself as a sort of cinematic equivalent to Tocqueville's Democracy in America, I'm not convinced Leone's political understanding is as deep or convincing as I would like it to be.

To my own personal taste, Phil Karlson's The Phenix City Story did what I hoped Once Upon a Time in America would do but didn't.

Glad you liked The Frighteners, Zach. I liked the casual and even witty way Jackson employed special effects to support and extend his imagery (that 'express tunnel to hell'--doesn't that resemble a large intestine?)--something he wasn't quite able to do in his Hobbit movies.

And Leone's film--space and sweep and music and rhythm holding sway over all. Forget politics, that was what America must be like for Leone, and what the film was all about for me.

I love it ! Very creative ! That's actually really cool Thanks.

Wow, there is really much useful info here!