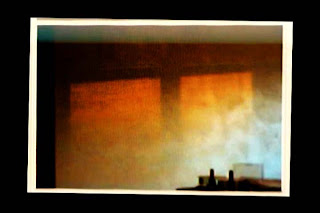 Kyle Canterbury is a teenager whose work in video art has been very highly acclaimed by Fred Camper and Jonathan Rosenbaum. I think the "prodigy" line is most strongly worked when there's money to be made, status and a status quo to enforce. That's why Canterbury, a video artist but not one coming from the art world, probably doesn't have too many people fawning over him. But I would stress that Canterbury is the real thing.

Fragments from a Room is one of my favorites. Like Brakhage in Text of Light, Canterbury pushes the indexical potential of photographic images to their breaking point, or sollubility; colors bleed into each other, pixels eat away at the integrity of a line or a color field; when the 'vertical roll' reimagines each image so that even a 'shot' no longer seems quite like a shot. (The seminal work on the vertical roll, as far as I know, remains the video of the same name by Joan Jonas. But Fragments from a Room is pretty fascinating, and were I to ever teach a course covering these grounds, I'd love to screen both back-to-back.) The diffusion of the image into pixels and other video idiosyncrasies makes for an underlying foundation of Canterbury's work, but from there it goes in a lot of different places--ghostly b&w images of George W. Bush and war bombings (A Video), abstract Klee-like squares in Color Shifts, Gehr-like excavations of space. And though it's sometimes easy to spot what Canterbury is doing in terms of avant-gardists before him, the work never feels like retread (or hero worship). Instead I get the sense of artisanal devotion to craftsmanship--at any time Canterbury is traveling (relatively) worn paths, he's experimenting. He's learning the tradition he's claimed for himself, more than simply aping the masters of experimental film & video (which is what I would have done if I were his age trying to make poetic film or video). It's difficult to extrapolate that kind of judgment from more or less abstract works, admittedly, but I think what ensures the "innovative" feeling of the videos is that they are never predictable. At most they are working in an identifiable strain. Should Canterbury continue on this path I expect that the proportion of his work that feels totally new and strange will grow.
To top it all off, Canterbury is the kind of cinephile who will list Nick Ray's Party Girl and Kubelka's Arnulf Rainer as among his favorites. That's my kind of cinephile. 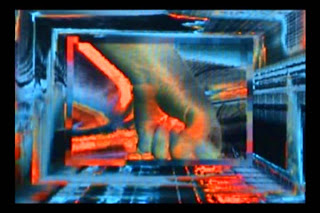 The great thing about Ten Videos: 1 is how alive it is despite its simplicity. Pulsing at a few different rates at any given time (the pulse of the video image, the pulse of the 'framed' image whose rhythm varies), with black, neon blue, fiery orange as the three main colors, it's almost eerily active for such a deliberately constrained image, whose only captured activity seem to be the movements of (Canterbury's own?) hands.
A spectrum comes into being in this short piece:
- a spectrum from the captured, indexical 'thing' (which exists on several levels: the monitor and its surroundings which do not appear very clear to me, or the framed image on the screen--both very square, but both also existing in three-dimensional perspectival roundness of space) -
- to the bristling boxes of the video signal on my own television or computer monitor. (An "organicized grid," I'm tempted to call it.)
Ten Videos: 1 gets its energy from the sliding up and down this spectrum, or more specifically, the allowance for the viewer to shift from looking at something captured to looking at the medium of capture itself. In this, the video calls to mind, slightly, even Gehr's Serene Velocity. One's perception awakens, whets itself. In the context of the discs of Canterbury's work, it's a matter of seeing new thing after new thing, but also a host of allusions.
This scanty piece has taken me a very long time to write, and unfortunately it is because I have not been satisfied with the words I've written and deleted and re-written. (I'm still not, but I've been meaning to publish this for so long that enough is enough.) Let it stand not as the careful and more critical analysis I had planned to provide, but a place-holder, a simple letter of recommendation. The lengthier analysis will come at a later time, when I've been able to focus and reflect on the work itself. For now I have tried to give a sense of what excites me about these videos: how they're experimental in a way that seems fresh but also cognizant of history. As someone who is interested in the idea of tradition and yet who also believes in the shedding of certain traditional ideas hoisted upon us in cinema (and art), Canterbury's work provides great promise, in addition to its immediate pleasures and excellence.
Posted by ZC at 7:32 PM

jmac said...
This comment has been removed by the author.
2:43 PM

I've heard of this artist, and I did not realize that he was so young. The video stills are gorgeous, and your impressions of the work are beautiful. Although, I'm wondering how this artist relates to other artists here in NY like Cory Archangel, Nisi Jacobs, Luke DuBois. I think I'm responding to Fred's essay, where he says that no one he knows is making video art like Kyle Canterbury. (This kind of viewpoint lacks perspective on the limitless universe of contemporary video art. :) How is this artist specifically different from the array of vjays and video pioneers that populate Brooklyn, for example? Tell me, and I will listen! :)

(I would like to check out these videos very soon, and maybe I will answer my own questions! If this is the new Rimbaud, than I need to know!:)

P.S. Your posts on the elections are awesome. You inspire me to question my assumptions . . .

Hi Jen, I actually don't know Jacobs, et al, except by name/reputation so I can't comment on that. Sadly!

I don't know if I have your email address but if you want to get ahold of me at rashomon82 at yahoo dot com we can talk about ways for you to see Canterbury's work. Or you could try emailing Fred (or Canterbury himself? don't know if the address is online) about it. Who knows, perhaps New York could use a 'Kyle Canterbury program' one evening ...

Thanks, Zach. I will follow up with you or with Kyle or Fred. NY definitely could benefit from a "Kyle Canterbury program," and it sounds like at least Fred could benefit from a "NY program." :) For example, experiencing one ITP show at NYU would be enough to prove that inventing video art is not a one artist endeavor . . .

Even shots from his videos are fascinating!

I've heard of this artist, and I did not realize that he was so young.

A lot of effective data for myself!