Knives in the Executioner's Back 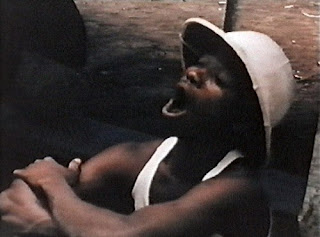 Just some notes: The human zoo, a largely 19th century phenomenon that (under the guise of the developing priviliged-amateur discipline of anthropology) saw the manhandling of indigenous Americans, Africans, and other peoples for the amusement and edification of nice white folks: science at the circus, or circus-as-science. The impulse or imperative to submit fellow humans to the project of taxonomy (the whole picture, both good and bad, civilization and barbarism--the Albert Kahn Archives, the Mnemosyne Atlas, the panorama, the great project of vision-knowledge). This is a background for a thematic and ideological strain from which the cinema itself sprang and proliferated (see Ellen Strain's article, "Exotic Bodies, Distant Landscapes").
Sometimes the manhandled spoke back in return from within the insidious racist/colonialist performances of this apparatus, and not always in the most direct ways. (See this post for a mention of Joshua Yumibe's excellent article on a 1927 'Abyssinian Expedition.)
To read up on some more in the near future: Hottentot Venus; colonial/anthropological photography; 1927 Abyssinian expedition; 1931 Paris colonial exposition (and other 19th/20th C expositions); Josephine Baker (not to mention Anna May Wong); minstrelry; panoramas; histories of evolution & taxonomy.
Posted by ZC at 10:25 PM