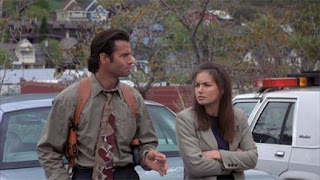 I think of how often police procedurals and cinematic/televisual fiction which otherwise involved offices or bureaucracies have had to include 1+ characters whose sole existence seems to be the gleeful blockage of protagonists' operations, investigations, quests, and so forth. Not always villains per se - or sometimes only revealed to be complicit as villains late in the narrative - these managers and officers and bosses are there just to "bust chops," as people used to say. This figure evinces the cold, unimaginative, sadistic spirit of Lumberg (from Office Space) as dispersed throughout an entirely different generic body.
Posted by ZC at 10:14 PM