Every so often over the last month or two I have come across commensensical dismissals of the recent Les Miserables film as a crime against cinema - an objectively bad film, or at least, one that is objectively poorly shot or poorly framed.

But each time I see this argument I'm left scratching my head. I wonder what an objectively poor shot is supposed to look like. A viewer is entitled to such judgments, obviously, but shouldn't it be as a result of formal context rather than a lonesome little standard ripped out of a fictitious rulebook? Instead a lot of the grievances against Les Mis imply that there an objectively correct way to shoot musicals (in long shot!) and that Les Mis breaks this rule (because musicals musn't be filmed in close-up!). All this seems like utter nonsense to me, though. Even if there are solid practical reasons to frame a musical performance a certain way in general, there are always going to be legitimate reasons to at least attempt to frame it differently in a particular scene or a particular film. In the case of Les Mis, and Tom Hooper (not a great director - but, I quite like The Damned United) seems to have had at least an idea in his head when he was framing things. Most directors of prestige product are merely content to mimic the appearance of an idea, and instead cling to convention. 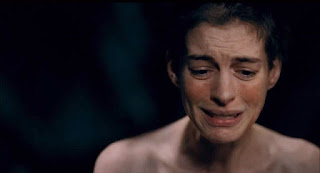 The dreaded close-ups which mark much of Les Mis, including the big scene which may win Anne Hathaway an Oscar, seemed fairly motivated to me. In conjunction with the insistently filthy make-up and costuming, on the most basic level these long take close-ups are a study in abjection. (Mind you, this is a prestige film abjection.) I would have to see the film again to be sure but I wonder if the off-center framing - surely in the "I Dreamed a Dream" number at least - isn't also directed toward a sense of longing or lack, so that shunting a face to one side of the frame in a number about aspirations is a simple (yet, for some, off-limits) decision. And the aesthetic trade-off to hearing better singers perform the role on stage is that here one gets the opportunity to see characters' faces up close and deliberately pathetic. The face on the frame is meant to express what the whole body and voice express in the more continuous timespace of the stage.

I'm not saying it's great or even good. I'm saying it's not awful and it's not pointless, and that the exaggeration about its mediocrity may have other, hidden motivations.

Lest you think I'm rallying to the film's defense as a superb achievement (like the esteemed Matt Zoller Seitz, who has bravely waved a banner for this movie), I'll disclose that I have no special affection for Les Miserables as a stage musical and I don't even think it's a particularly good film. I probably would not have seen it at all if I hadn't accompanied my wife. There are plenty of things to criticize about it, both as an adaptation of a "contemporary classic" stage musical and as a standalone work of cinema.

However, some of the glee with which this movie has been attacked (particularly the attacks from outside the fan community for the stage show) reminds me of venom directed at Mamma Mia, a film which was much more poorly received than Les Mis, but which (after two or three very grudging viewings) I eventually came to appreciate. Catering to the cinematic tastes of a decidedly unhip, largely female audiences is something many "discerning" viewers will not forgive or even try to understand - myself included, at times, I'm ashamed to say.
Posted by ZC at 8:14 PM

I just loved the close-ups and thought they gave the movie whatever value it has: it was a great idea, and not an obvious one, and I think Hooper deserves some credit for it. I did think the bigger, ensemble numbers were poorly staged and edited. The movie inverts the original, in a way, where the ballads are less impressive than the way they bring an epic, movie-like feel to the stage.

Really nice to come back and see you writing again here, Zach - especially on issues in the contemporary cinema. I hope we'll continue to see more!