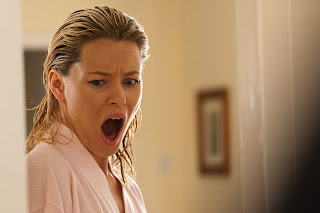 Along the same lines as Tim and Eric's Billion Dollar Movie, Peter Farrelly et al's Movie 43 foregrounds the commercial substrate of any particular movie project and in the narrative of a film about the creation of a film, parodies and lampoons Hollywood representational strategies and conventions. The first (and one of the funniest) segments has Hugh Jackman as a charming man on a blind date with Kate Winslet, who appears to be the only person who can see (or is bothered by) the pair of testicles hanging from his neck. As the sketch fizzles and ends, the clueless character (Dennis Quaid) who's been trying to pitch this scenario as part of an intelligent movie with heart that will be a box office hit responds, in earnest, that it's a metaphor! We let these small things get in the way of our happiness! This should clue us in to the film's M.O., and anyone who says the movie is gratuitously stupid, offensive, or tasteless has only indicated they haven't caught on to what the movie's doing. Basically every segment is a meta-exercise, a calculated exaggeration or displacement of some convention or another that seems absurd. But then you recognize its close structural similarity to a thousand movies you've already seen before which just did the same trick earnestly. Movie 43 is in many ways a hard film to love if you haven't seen so many commercial narrative films that you've grown tired of them, disappointed by them, yet still sort of love them. (Or you might love it if you dig jokes about shit, balls, and menstruation. I won't lie, I enjoy gross-out comedy too.) So, this is a shaggy dog kind of a project and it's not totally even or successful. It doesn't really cohere, and you certainly might expect it wouldn't, but at the same time it's probably best appreciated as an astringent gesture from a deceptively foolish perspective.
Posted by ZC at 10:07 PM

Interestingly different perspective from Richard Brody's pan, which is the only other review I've read at this point. I suspect that best-case scenario is this is the kind of film you have to semi-hate to even begin enjoying, and I'm not generally a fan of such exercises, even as they earn my grudging respect.