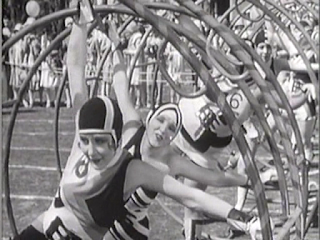 The wedding ceremony, with the hammer blows of the gallows and an inmate's guitar-accompanied serenade, is jaw-dropping.  My favorite scene in an impressive work overall.

This film does feature one of my least favorite conventions of dramatic narrative.  In this case, Kay Johnson has promised her husband-by-technicality Hagon Derk (Charles Bickford) that she won't take her fast, fancy car out of the garage of his workingman's home.  (You see, she is expected to put a damper on her moneyed big city ways while living with him.)  But an emergency prompts her to break her promise for unselfish reasons.  When Dirk returns, he sees evidence of Cynthia's broken promise and immediately accosts her, leveling accusations that are hardly gallant.

In movie-situations like these, it irks the hell out of me when the person wrongfully accused trips over himself not to get in a substantive word in his own defense.  Instead, even during ample silences, he stammers, stutters, offers lines like, "Well if you'd just gimme a chance..."  It's the sort of contrivance of speech and behavior I can accept in the context of Shakespearan drama, but it usually (usually!) rings very false in films.*  I'd hardly suggest movies should mimic anything so vague as "real life," but nonetheless it seems like such a lazy, convenient dramaturgical construction that juts out from almost any previously established code of verisimilitude that given film employs.  It's on the basis of narrative and dramaturgical form that I make this criticism; not on the basis of mimetic realism.  Rarely is it clear why the character in question should fail to blurt out the most salient information.  It's simply a convention for writers and directors that edges us closer to the climax.

* I grant, of course, that such a contrivance will sometimes constructively signify an overly domineering vs. docile character.
Posted by ZC at 7:25 PM

Just saw both the silent and sound versions of Dynamite at the UCLA Billy Wilder Theater, part of a series where they are showing the silent version of a film follwoed by the sound version. The series runs through February.

While there are no differences in the main plot in Dynamite, the sound version has additional scenes involving Bickford's young sister. In addition, the dialogue between the Kay Johnson and Julia Faye is much sharper in the sound verison, and the climax of the two films are slightly different; for example, in the silent version you see the cause of the mine cave-in, in the sound version that scene is eliminated. Alas, for Conrad Nagel's character, the result is the same.

Thanks for the additional comments! I'll have to see about tracking down the silent version ...