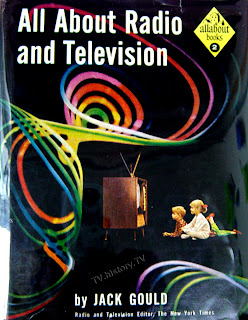 "The cover centers on a television set seen from the side.  To the right are two little blond viewers in their pajamas, presumably siblings, who watch the illuminated screen raptly, one seated and the other lying on his stomach, head lifted at attention.  This domestic scene takes place in a void - the uniform black of the cover allows for no spatial orientation whatsoever.  But framing the floating vignettes are two twisting configurations of rainbow-colored electromagnetic waves.  Here the gap between the television commodity, represented photographically, and the network, represented in abstract wave patterns, is almost traumatic, as though some monstrous science fiction force had invaded the cozy children's world.  The cover of All About Radio and Television insinuates a startling fact: the network and the commodity, though structurally linnked in the ways I have suggested, are profoundly dissimilar and even antagonistic."  (David Joselit, Feedback: Television Against Democracy)

For all its virtues, Joselit's book is also highly symptomatic: very much the work of an art history professor deciding to take on the brave new world of television studies, absorbing some of it, but also forming an argument without completely attending to the literature's findings.  (Such is the challenging nature of interdisciplinarity ...)  Interpretation suffocates a lot of Joselit's readings; if the electromagnetic waves are "almost traumatic" then one wonders what could possibly not constitute a trauma.  Instead the fashionable buzzword of trauma serves to contextualize an image that, to my own "art historian" eyes, is much more mundane than that.

In Joselit, network broadcasting culminates (more or less) in the object, the physical object of television as well as its mainstream programming.  The network is represented abstractly, at least when in the context of commercial broadcasting, and video art rides in to save the day when finding more sophisticated or literal ways of representing it.
Posted by ZC at 10:13 PM