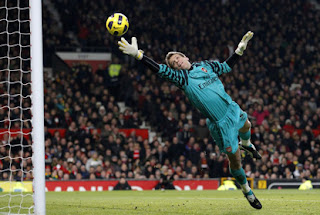 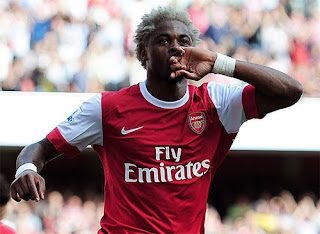 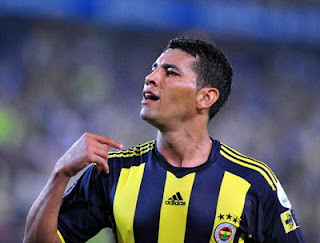 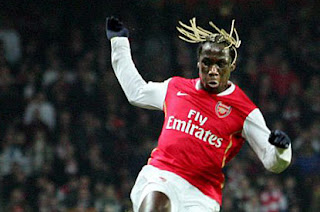 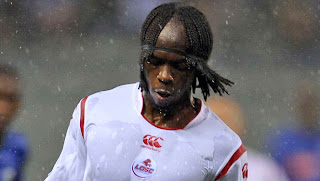 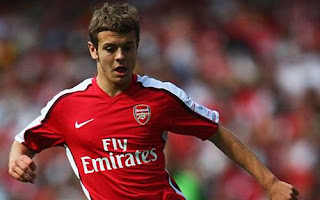 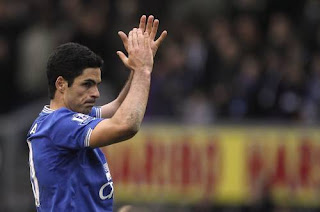 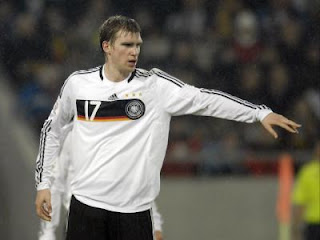 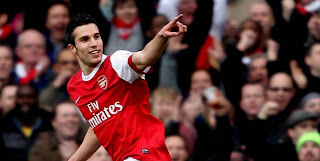 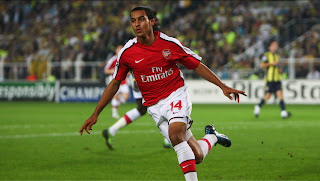 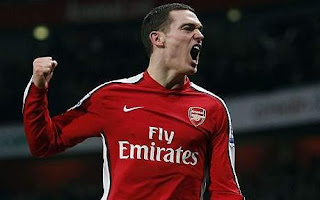 (Note: I see the above selection is fairly uncontroversial, as Arsenal fan Piers Morgan has recently tweeted support of the same eleven - Szczesny in goal, Santos at left back, Mertesacker and Vermaelen in central defense, Sagna at right back, Song and Wilshere and Arteta in midfield, Gervinho wide left, Walcott wide right, Robin Van Persie in the middle.  Though I hope the front three play fluidly and swap positions.)
Apologies for breaking my recent blogging hiatus with Premier League talk instead of, oh, the Toronto International Film Festival (not that I'm going) or FX's Louie (which I'm enjoying) or similar cinephilic-telephilic objects.  I've spent the last few days (a) reading, (b) writing, and (c) fretting obsessively about the end of the European league transfer window.
To make a long, armshair sports column a little more concise - I'll just repeat that I'm an Arsenal fan.
(Already I want to introduce a tangent into my "concise" blog entry: We American fans of the English game are so predictable.  Most of us witlessly gravitate to Manchester United, Arsenal, and Liverpool - the three most successful clubs in English history.  I knew Arsenal were a big club when I ceremoniously devoted my allegiance to them, but it took me just slightly longer to realize what a damn statistic I was.  Whatever.  I could have jumped ship at any of the low points before, but I didn't and I won't.  On one hand, I don't call myself a "supporter" because that sounds like an unbearable affectation coming from someone who's never even set foot in London.  On the other hand, the big European leagues are very much a global game now, so there's no shame in being a Malaysian, Hungarian, or American fan of an English club.  I've roused myself at ungodly weekend hours for years just to see Arsenal try to pass the ball into the net.)
This past weekend, of course, saw the Gunners humbled by Manchester United ... 8:2.  That's right.  That's a soccer score.  If you're not aware of the significance of this and - strangely - are still curious, Google will direct you to countless pages of commentary and analysis.  Suffice it to say that this was definitive proof that the club's, and the manager's, actions in the transfer market and their policy on young talent has simply not been good enough on their own.  The squad needed skilled and determined players, and while some of the youth talents had that, they needed to embed it with a lot of experience on the pitch.
So you see, Arsenal's last gasp flurry of transfers was a highly satisfying - here are several experienced new players, all past college-age, who can help anchor all the youth talent in the club.  I think the average age of this ideal starting eleven is about twenty-five, and with some other recent signings, Park Chu-Young and/or Yossi Benayoun, in the squad, we'd even be a hair closer to greybreard.  This did not at all seem the case in the early part of the transfer window, when Arsene Wenger was signing - it seemed - mostly teenaged, unproven wide players when fans were clamoring for strength in so many parts of the pitch.  I am optimistic that the team will finish fourth, maybe even third (at the expense of Liverpool or perhaps Chelsea), and that they could even grab a cup trophy by season's end.  Finally.
That said, a tiny morbid part of me still expects Vermaelen, Van Persie, Song, Wilshere, and Szczesny all to pick up season-ending injuries before the end of October.
Posted by ZC at 9:45 PM

just want to leave a note...this is the second soccer post that no one has commented on. I for one, think they're great.


Check out zonalmarking.net ... there's an outside chance you haven't heard of the site, and if you haven't the fantastic tactical breakdowns should appeal to the nerd that lives in you.

It won't really have effect, I consider like this.