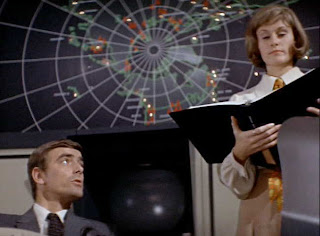 (Colossus: The Forbin Project, dir. Joseph Sargent, 1970)
Serge Daney dit: "The word “power” came at one moment, synchronically with Foucault... We can say that our cinephilia helped us to go forward. For a cinephile, the power of the cineaste, even if it’s really imaginary, is out of proportion socially and real in regards to what he manipulates as material. Therefore, we see a moral preoccupation which comes back to Bazin, which is to evaluate films not really on their aesthetic quality but in ethical terms. It’s a period when we speak of “direct.” Then there’s a third period when, from the idea of power, we moved to the realization of the power of media. Power today is the new management of media which is a problem on which the Leftists have been nil, pre-historic, with the exception of someone like Baudrillard. But let’s say that, in general, Marxist reflection on media is nil. This is a little bit the Mattelart period. From then on we saw how we could re-interest ourselves in cinema, in films that were coming out, to become once more a film review while being a little bit ahead which consists in recognizing that film is one piece in the more general game of the media and that we can’t disassociate them. To approach these media, everything we learned before 1968, in psychoanalysis for example, is helpful." (h/t, of course, to Kino Slang)


Daney's suggestion about leftist or Marxist reflection on media seems both true and untrue - maybe less true now, some decades after he made the claim.  Still, there's a barb that remains: we haven't come very far.  Especially when Michael Moore and Slavoj Zizek seem like very tenable "choices" for significant portions of what we'd call, I suppose, a "progressive" public.  Some tentative postulates -

re: 'Then there’s a third period when, from the idea of power, we moved to the realization of the power of media. Power today is the new management of media which is a problem on which the Leftists have been nil, pre-historic, with the exception of someone like Baudrillard. But let’s say that, in general, Marxist reflection on media is nil.'

Reminds me of something Paul Mason writes in his much-linked 20 reasons... blog entry, which comes up again in this great piece (very much a leftist reflection on media) by DSG:

'People have a better understanding of power. The activists have read their Chomsky and their Hardt-Negri, but the ideas therein have become mimetic: young people believe the issues are no longer class and economics but simply power: they are clever to the point of expertise in knowing how to mess up hierarchies and see the various "revolutions" in their own lives as part of an "exodus" from oppression, not - as previous generations did - as a "diversion into the personal". While Foucault could tell Gilles Deleuze: "We had to wait until the nineteenth century before we began to understand the nature of exploitation, and to this day, we have yet to fully comprehend the nature of power," that's probably changed.'

I'm not convinced that class or economics are no longer as significant an issue in this way (in my experience as well as general impressions), but otherwise it gives a sense of where we're at, perhaps. Your point that we haven't come very far is no doubt true -- certainly, we haven't come far enough...

'it seems foolish to overlook the possibility that no deception is happening anywhere, when probability deception is occuring more than almost anything else.'

Unquestionably. Dan Hind's recent book is very strong on this, particularly because he's one of very few on the left coming up with concrete strategies for media reform as well...

Nathan - you're right! Thanks for catching it.

Matthew - I appreciate the thoughts. I'll look at that Hind book sometime. Ultimately the question of media and social, participatory politics appears like a broken record (to me). The same things keep happening, with hopes getting pinned on technologies. But these optimistic prognostications continually assume that the capitalist structure into which these technologies emerge will remain static, beaten back by the "dynamism" of new media tech. I think this will actually be one of the key questions informing my scholarly work over the next couple years, actually ...

In that such optimism terminally underestimates late capitalism -- agreed. I remember that some writing on social media during last year's protests and occupations here (in the UK) came up with rubbish like 'dissent entrepreneurship', a good way of falling directly into that trap. Lulz-based activism is an interesting development, though, and hopefully it will be worth keeping an eye on...

I'm not convinced that course or economics are no lengthier as considerable an subject on this way
When we play the WOW, we need to try get the WOW Gold Cheap,thst's to say, spend less money, do we have any good way to Buy WOW Gold from trust friends or some way else? When we have that we can play the game becomes more quickly and update the levels more easy.

These guys are experts when it comes to agriculture in the WOW Goldto sell to other players of different amounts of money. Therefore, if you want some World Of Warcraft Gold, you know, who you turn to gold producersIt is well known that Tera Gold credits by obtaining the services of the team .