If perhaps at one time after their invention as something other than "small adults," children couldn't wait to access - illicitly or not - the pleasures of adulthood, American culture has by now fully entered the inverse situation.  It's adults grasping for fantasy, wonder, splendor, who don't simply elevate low forms to respectable heights (like the comic strip form into the graphic novel) but come to value young adult fiction and texts alongside, even in place of, "adult" culture.  Thankfully the mania for Harry Potter has died down enough that one can express skepticism towards its merits, publicly, without the tar-and-feather gang emerging from out of nowhere.  It's still in force for Pixar, I think - though I think that by now, the cinephiles who don't expect to get much out of Pixar's movies simply steer clear of them.  Perhaps it's wisest this way.

The Pixar product has usually struck me as a little too pitch-perfect in its wide-eyed (though expert) conventionalisms - really, a hyper-Disney.  This is a mark one can hit a little too well, in fact; affectation is the cancer of whimsy and self-aware humor.  (It's a line drawn in American TV comedy all the time: Parks and Recreation tends to skirt on the acceptable side of this line, and has additional merits, whereas I've never been able to shake the bad vibes I get from the NBC Office, which is of course very similar in form and tone.)  It can be grating to keep hearing about how amazing the Toy Story films are, mainly because a substantial amount of the acclaim seems to be a really good consumer review - 'this is new, and it pushed my buttons.'  There's a formula to Pixar appreciation: express fascination with the dexterity of its use of technology (not soulless like those Final Fantasy movies), then wax gee-whiz about the deep moral lessons and emotional textures the film imparts.  This gets to the heart of the problem: it's not, of course, that I take issue with treating animation seriously.  I don't even take issue with treating "cartoons" (the commercial, juvenile, formulaic things) with care and attention.  It's simply that "the culture of Pixar" (or the culture around it) has fashioned a particular way of treating these films seriously. 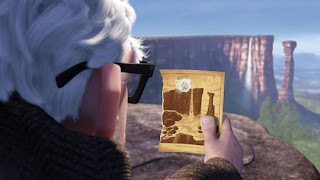 It's this ingrained analytical toolkit towards which I'm most resistant.  I'm not a heartless person, and in fact I think that sentiment is an underappreciated tool in the array of artistic effects (this upper-middle and just-plain-upper cultural bias is probably largely a more unfortunate holdover from modernism).  So the techniques in films like Monsters, Inc., Wall*E, and Up - extremely faint but definite echoes of a Fordian way of dealing with on-screen objects, time, and memory - do indeed move me.  And I even take pleasure from the fact that a film as unrelentingly sad as Up is somehow targeted toward children.  What I do also appreciate about Pixar is, because of their privileged place within the mainstream film industry, is that they're able to go ahead and be what most products in the culture industry are far too timid to be - a little lopsided, a bit risky in terms of narrative formula, willing to take their time in parts (this is an aspect of modernist aesthetics I wholeheartedly encourage).  This all exists in addition to, and in conjunction with, the often annoying conventionalisms and predictable affectations the films possess.  I'd love to see a kid who's not "cute," a landscape that's not "breathtaking" ...
Posted by ZC at 8:25 PM

I disliked the 3rd TOY STORY - the smugness outweighed the "perfectness." It made me tired.

I tend to like them better when I get the sense that the director they chose makes weird choices ... so far that's only happened with WALL-E and RATATOUILLE. (But I like UP, too.)

And, actually, I withdrew them from the canons listed on my website because they just didn't seem to fit in with my M.O. Still lost for an explanation. They just aren't major works, when you get down to it. Unless you're the kind of moviegoer who believes that THE WIZARD OF OZ is a masterpiece.

I like a few Pixar pics quite a bit(WALL-E and RATATOUILLE), but I think the general Pixar method is to sidestep doing the kind of really challenging animation that Disney was going for in SNOW WHITE and DUMBO (and the other early movies) and that the best of the Looney Tunes guys achieved (in a stripped down, anarchic fashion). There are things I like about UP, but it seems to squander so many of the possibilities that animation offers in favor of doing Spielberg riffs.

I suspect that these movies come off a lot better if you're watching them alongside junk like the SHREK movies. I can see how TOY STORY 3 looks like a masterpiece if you're comparing (consciously or not) to SHREK 4.

OK - they reflect their time's ideology as much as anything else, but as far as films for young kids go, they can't be beat. They're much better written than trad Disney, far less bleak and fascistic than any number of superhero movies, and actually deal with failure, trust, insecurity, death, aging, grief, work and care (in a less bullshit way than most live action films IMHO).

They're not all great, and none is a 'major' work, but they actually do reflect different points of view across different films (as far as they can in today's Hollywood). As someone who didn't even like Disney as a kid, or CGI-led stuff as an adult, they're much better than either. They actually have 'stories' and 'characters'. Especially these days, when pretentious crap like Tim Burton, James Cameron or Christopher Nolan is considered as good as it gets for most age groups.

Pixar films seem like "major works" to somebody (lots of somebodies), though. I'm a little curious as to why that is, how it gets to be that way, and how it might even be anticipated & cultivated by the ongoing maintenance of the Pixar aesthetic. And sometimes it's one and the same task to identify what's special about these films and what's most formulaic, most affected - such as the fact that they come off so much better in comparison to other kiddie-ish product (as W. Kasper notes), but also that despite all their visual energy & pizazz they frequently put all their focus in Spielberg-emotional territory, as if the animation were really beside the point (or simply instrumental/ornamental).

Isn't "Spielberg emotional territory" a kind of Hollywood law now? Nearly every US movie I've seen in recent years has it (unless it's telling me poor people are shit, conformity is the only path to love, or extreme violence is redemptive).

BTW A lot of kiddie/teenage junk gets treated like major works these days. So much so, I tend to ignore most MSM film critics under 50. There's a whole generation who seem to have spent their entire movie-going life waiting for their favourite superhero to get filmed, or at least see their boyhood horror faves get remade. The type who mean 'franchise' when they say 'film'.

There are stuff I like about UP, however it appears to squander so countless belonging for that possibilities that animation offers
When you have nothing to do or unhappy? What should you do to spend the free time? How about the game? like to get WOW Gold in WOW, and how to have theCheap Gold for WOWwith less money, is there anyway to get the for us? We need to think about this.

A simple Internet search shows a number of specialized online resources that sell Cheapest WOW GoldWorld of Warcraft. As a dedicated gamer, you know that the Buy World Of Warcraft Gold credit cards are used to buy stocks in order to improve your gambling skills.

Maybe the most incredible graphic designer of our modern times!