We Live in a Demography 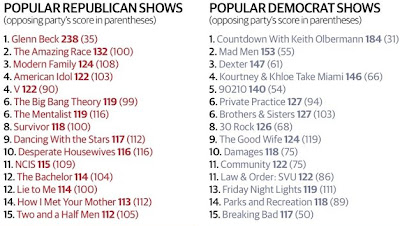 (Link.)  Strange that a lot of the Republicans' favorite shows are still reasonably popular with Democrats (only three of them earning double digit scores from the quiche-eaters, and two of those are high two digit scores), whereas a lot of the Democrats' favorites are quite negligible to the Nascar tastes - the first five or six shows get middling two-digit scores from Republicans, and are followed by a number of other double digit scores.  According to the survey this breakdown of favorites may be because "Republicans like winners" and self-loathing Democrats are drawn to damaged goods.

My impression is that a significant element separating these two lists is irony, which the Democrat list has in spades: either shows that utilize irony, or double-voicedness, in pretty upfront ways (Mad Men, Parks and Recreation) or whose popularity among a cognoscenti involves ironic detachment (the Kardashians, SVU).  Let me reveal what is already obvious about my own tastes and observe that the one red list program of which I've actually seen a substantial number of episodes, Lie to Me, is in fact a procedural utterly unironic about its use of "science," of techniques.  This fairly entertaining drama is about a consulting firm which specializes in deception detection - they locate and uncover lies by studying universal, inescapable body language and micro-expressions!  Hired in each episode by government agencies, private individuals, or companies, the plots (of course) tend to twist in such a way as to show that the obvious liar is either not lying - or only covering up an even more insidious scandal.  It's a ludicrous business model we see at work here, where time and again Tim Roth & Co. wind up exposing their own clients.  To appreciate this show, and even to stay sane while watching an entire season of it (like I have) means establishing some basic relation to its ridiculousness.  Either one overlooks it because the pleasure of seeing science & technique successfully, wittily implemented is sufficient, or one savors the friction.  Some shows can accommodate this friction, others seem to need the irony (like Parks & Rec).

Not sure we're speaking about a golden age of irony, exactly, but, Henri Lefebvre says: "The great ironist appears in periods of disturbance, turmoil and uncertainty, when the people around him are absorbed in extremely large issues, when the future hangs on important decisions, when immense interests are at stake and men of action are unreservedly committed to the struggle.  This is when the ironist withdraws within himself, though only temporarily.  It is his way of taking stock and recouping his strength.  Back out again in the public domain, he questions whether those involved really know why they are gambling with their lives, their happiness or lack of it, not to mention the happiness of unhappiness of other people.  Do they actually know they are gambling?  Do they know what the stakes really are?  For the ironist the actions, projects, representations and men which confront him are like constellations where distances are more visible than the brilliant points they separate; these spaces he fills with darkness.  The tasks in hand, even the most valid ones, are not enough to satisfy him.  He scans the horizon and tries to weigh up the present.  He is the first to perceive the limits of the interests involved and the chances the tactics in operation have of success (while the people who have conceived them feel obliged to believe in them unreservedly, and never to lose face in front of their supporters)."  (from "On Ironic, Maieutic, and History," Introduction to Modernity, trans. John Moore)

It could be that the symbolic struggle at work in a chart like the one above is whether or not some of these products deserve irony or are simply granted it via the wish fulfillment and privilege of an educated elite (as a means of consumerist distinction).  And/or it could be that the great red-blue distinction itself - instead of calling for an earnest "purple America" rebuke - needs more ironizing.
Posted by ZC at 8:15 AM