"There has never been so much talk about 'the power of the image' since it has ceased to have any. The overwhelming majority of 'images' which have currency on television nowadays are less those which might possess any intrinsic strength than those which represent power and which 'work' for it as 'brand images' work for a company. It is strange that we have needed a war in order to re-discover that the image was also ever a lure (Lacan was interested in animal mimicry, in the eyelets on the peacock's tail and their grotesque manner of 'giving the eye'). A lure meant as a decoy, to divert attention and gain time. Advertising, for example, is less about inculcating selling reflexes than about indicating the power of paying a lot for a space with the sole purpose of no one else occupying it." (Serge Daney, from Cinema-in-Transit)

The old, "naive" realist-belief in an image, or of an image, still resides in the gray area where one isn't sure of what is being faked, or of what might happen: bills & coins flushed down the toilet in The Seventh Continent, footage of pets being (possibly) tortured, moments in which we cannot discern between an actor's emotions and a character's - not simply that we are unable to, but that there is even no hope of an abstract distinction. Fear in the eyes. This takes a certain liberality or magnificence on the part of the filmmaker; it is the artistic counterpart to advertising's own implicit indicating of "the power of paying a lot for a space."

The circus ring, and the caravan of trailers & tents, provide a set of metaphors for cinema to remark upon its own assemblage of attractions - bad films set in or around a circus can be unbearable, unless they're bizarrely, grotesquely fascinating (like with the Joan Crawford vehicle Berserk!); notable films of course like Lola Montes and I Clowns pop up from time to time; and then there's Rivette's 36 vues du Pic Saint Loup, which reserves its footage of in-the-ring performance itself for these dizzying, terrifying moments of uncertainty. (Plus, Sergio Castellito with a suitcase full of plates provides one of the bigger laughs I've had at the movies in weeks.) Rivette is the master of the slow burn, I think because he is also its most dedicated, humble student. 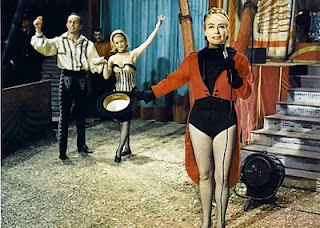 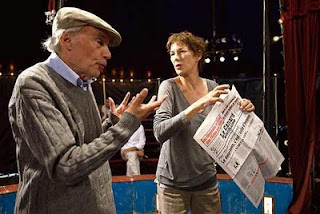