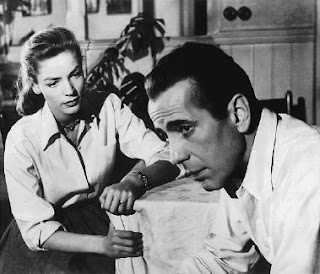 "To transform oneself into a corpse, a martyr, or something formless and repellent is not a matter of expiating a collective evil but recalling its existence. These simulated remains do not aim to be hidden bodies (that would amount to making them all over again) but instead manifest as best they can the moral infection that propagates itself beginning with the moment of the Nazi death camps." (Brenez on Ferrara, p. 152)

In White Hunter Black Heart Clint Eastwood, who essentially plays John Huston, in a minor way tries to exorcise the demons or zombies of Nazism through a bit of black humor (see); again and again World War II, and the Holocaust, offer themselves or are offered up as the central pivot against which the cinema measures itself. Recently I took another look at a different postwar Huston - not The African Queen - but Key Largo, which is my favorite of the early Hustons by some margin. (Not that I have quite seen all of them.) A postwar ex-major without home or career finds his way down to the Florida Keys to see the widow of his old buddy & her invalid father-in-law. Their hotel is commandeered by Edward G. Robinson, whose villainous 1930s Hollywood legacy welcomes itself to the home of a certain stance of postwar realism (location shooting and/or its simulacrum, and relatively respectful/liberal "local color").

Heidegger, 1949: "Agriculture is now a motorized food industry, in essence the same as the production of corpses in the gas chambers and extermination camps, the same thing as the blockade and starvation of the countryside, the same as the manufacture of hydrogen bombs." (See also Siegfried Giedion, Mechanization Takes Command.) 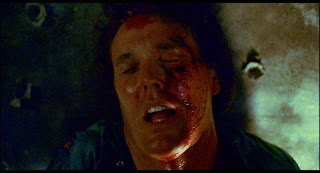 If you compare early sleazy genre films by Ferrara to comparable projects, like the queasily-entertaining Vice Squad (dir. Gary Sherman, 1982), you may see where the differences between the good & the great inhere. Ferrara cuts to the root of an image, a sound, or a desire, like a notable poet is supposed to cut to the root of a sound or a word; his films are intriguing because they rise above being only symptomatic in a rich or sophisticated or enjoyable way. (Though in some contexts, in some conversations, I might well defend these latter kinds of films, too.) Ferrara takes us to a source, to the place where the stream might be redirected, even if only - for now - in our imaginations.

"I don't know why you do it, Walsh. You'll never change the streets." (Princess in Vice Squad) 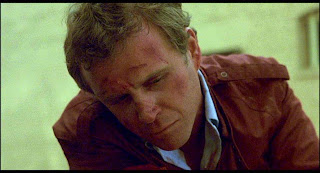