One of the pleasurable things about Mad Men (season three of which I just started watching) is that as it emerges into what we now think of as The Sixties, the characters and plotlines getting weirder doesn't reek of desperation but practically of historical necessity. Though still impeccably tasteful, the way it navigates its historical touchstones is such that it's basically allowing itself to get "weirder," and more complex. With a degree of awareness I still haven't figured out yet (a lot? a little?), the show very cannily operates according to the dominant mythologies of its time period, and utilizes them shrewdly. Cynically? Perhaps. But by now anyone who's actually devoting precious personal time to watching mass-market media at all, including stuff from the Good Ol' Days, must simply allow for this dimension to, more or less, everything. The reservations I have about Mad Men from when I first took a look at it still apply, but I must give credit to the way the series is indulging in measured, wide-ranging weirdness. And there's a new relation to the 'symbol' (cf. my previous post on the show) that I've noticed by now, this one not literary (like "birds = freedom") but simply a matter of intelligent marketing. Behold, the season 3 DVD cover: 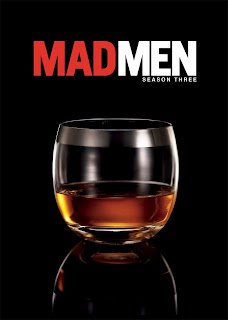