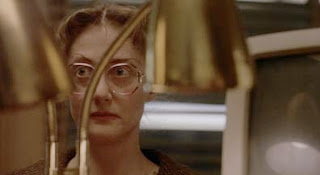 Office killer for Constant Consumer magazine, a factory for the production and finessing of content - director Cindy Sherman here finds an intriguing way to present office space, sad, yellow-brown, "cubicled" even when there aren't literal cubicles in sight. (In a place like this, the sign of having made it is the killer office.)

This movie has a horrible critical reputation (not unlike Suspect Zero, actually), but it too is a bit too hermetic, a bit too imbued with personality, to deserve such quick dismissal. (A moment's Googling finds a handful of appreciative onlookers, however.) Of course "personality" is an amorphous concept and anyway there are plenty of bad films with personality. But (pace hitman Jules) personality goes a long way. The cramped spaces that feel both intimate and institutional, voyeuristic and commonplace, are a rare effect - and I think more deftly achieved, more admirably self-aware, than when Indie takes out its own subscription to Constant Consumer and becomes a catalogue of "things," cf. the near-self-defenestration-inducing antics of Rachel Getting Married. (I think that this tonal balancing act is part of what Craig Keller addresses in quoted words below, and what one can link to various other parts of Sherman's art.) In another direction, i.e. on one facet, Office Killer's closest cousins may be Tom Noonan's amazing films What Happened Was... and The Wife. In certain ways these modest indie films are busy writing a particular sub-history of the present, and are forgotten before they're released (it seems), but live in. Cinephilia lives on just likes these movies, but it's now a modest, downbeat gnosticism. Maybe it wouldn't be such a bad thing for some kind of cinephilia to shed its masculinist obsessions with completion (etc. ad infinitum) and become an utterly decentralized network like in a Rivette movie. Nobody sees everything, nobody knows everything, and the moment gives you glimpses of amazing things.

* * *
All this being said, something's missing, too, in Office Killer. It's a sad film, sad in the same way Fritz Lang's Hollywood noirs are sad, — reasons that have nothing to do with their plots. Sherman's picture, and those of Lang, are films (and remember, now, we're not speaking at all of a 'meta' tone) about their genres, in an elegiac mode, that is, not elegiac about the past and possibilities of their own genres (and, again, now, mind you I don't believe there's any actual thing as 'genres' in pictures, but this distinction is part-and-parcel of the discourses of both the films of Sherman and of Lang, which are rooted in surmising a commercial climate), but about what their own films are not as a result of being formulated within that idiom which their producers ($) or supposed ($) public would comprehend as 'such-and-such set of locutions.'

(from here, as Mr. Keller writes what I imagine, unresearched, is the best that's been written about Office Killer)
Posted by ZC at 2:50 PM