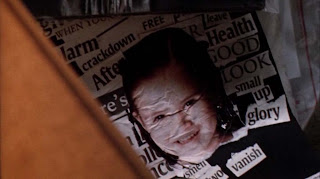 Not so easy to find the sort of low-budget genre films today that might make a latter-day Manny Farber rhapsodize ... at least, not without heaps of psychological explications, gilded lily bouquets of atmosphere. The cheap films these days are so often just bloated with self-awareness of their own potential powers. It seems one must inevitably make this compromise. Suspect Zero (2004), starring Ben Kingsley and Aaron Eckhart, is a cheap, "dark" serial killer film, much of it cribbed from Se7en and elsewhere, with all the typicalities you'd expect. The "antagonist" lives in subterranean lairs where his bizarre OCD habits belie some deeper virtuosity, some deeper truth he represents in almost mystical conjunction with our protagonist. (The nature of this connection is soon apparent.) And: Moooooood music. Quick cuts from dark to darker images. This was helmed by E. Elias Merhige, after all, the man responsible for grotesque experimental film Begotten ('91) and Shadow of the Vampire (2000, shamefully, unseen by me), as well as a few Marilyn Manson videos, for crying out loud.

What differentiates Suspect Zero from the mumbo-jumbo it's already fated to half-be, are (1) the sheer material-tactile pleasure the film seems to have in all the suspect's paraphernalia (sketches, numbers, collages); like certain shots in Se7en, when one appreciates the singleminded craftsmanship of Kevin Spacey's re-sewn composition notebooks; this detail extends into other elements of the production design, like an old, worn-in suburban home with a mom wearing tights on her way to a PTA meeting, not (I think) played for "provincial" laughs; (2) there's a pervasive loneliness about this film and its cross-country wanderings, one that really does seem to sketch at something like a dark heart of America. A lot of the standard ominous-mysterious mood plays well because, I think, Merhige is himself a believer in occult/paranormal stuff (if you believe his Wikipedia entry), and respects religiosity in ways that a lot of filmmakers don't. There is a beautiful apropos-of-nothing black church scene where the congregation sings "And He Walks with Me." A lot of foreboding dark cloudy skies: a choice of effects that is dime-a-dozen but here works quite well (the tones, the colors, seem absolutely right in a way that oncoming storms rarely are in Hollywood ... the much-maligned Twister actually seems to me to be a respectable example in this department). Pixellated surveillance-style footage stands in for the psychic flashbacks and flashforwards the characters experience: not an inspired decision in itself, but pulled off with gusto (a b&w close-up of Kingsley has black holes for eyes, deep chasms).

There are bad choices too, hackneyed ones: a character walking down the street in the rain to show the depths of his alienation; Carrie-Anne Moss' character in general is utterly superfluous: she's played merely & blandly as a composite of every thinkable female second fiddle that might appear in a role like this in a movie like this (maternal, professional partner-friend-lover).

In short, though, there's enough invention here, and the film takes itself seriously enough on these modest terms, that Suspect Zero warrants a look from anyone who is interested in the legacy of B-films in today's commercial genre releases. Though everyone's decided (and not wrongly) that Zodiac represents the great American serial killer film of the past decade, and this film is anything but close to that kind of superlative, something like this is worth a few attentive glances from intrigued parties, before it plunges into serious obscurity forever. 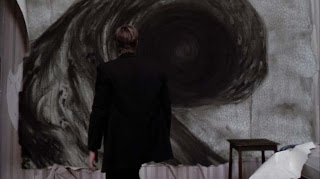 I passed this movie up as Yet Another Serial Killer movie. Have you read Star Wars Modern article on 'The Architecture of Serial Killers'? It seems to coincide in some ways with what you have written here, and it really articulated what had been lurking in my head about all these killers in movies and the strange artistic quality of their 'work'. I watched the trailer to Suspect Zero and it seems the antagonist does this sketching thing to detect killers.

I'm finishing a book called Serial Killer Dreams, and I lost a couple of weeks because I happened to pop in a tape of Suspect Zero that had been sitting around for years and ended up writing several pages on it, in between The Lodger and M. Lofty company, but I found that the film repaid close attention -- it enabled me to understand things about Lacanian film theory I've been struggling with for 40 years. Some clarifications: Kingsley isn't Suspect Zero -- he's hunting Suspect Zero and killing other serial killers while tracking him, and his drawings et al are the paraphernalia of remote viewing, a form of controlled clairvoyance the CIA used in the 70s for spying. I'm not sure the face with the empty sockets is Kingsley -- look again. When I peered into the sockets I saw numbers wriggling like worms, but that's probably just me. I found the film extremely well directed, as Zach did. Those clouds are filmed so well because to Merhige (pronounce "marriage"), just about everything in the field of vision is a metaphor. His blocking and cutting are constantly inventive without being flashy. And Kingsley knocked his mad profiler role out of the ballpark. As far as the generic genre elements go, they come from a high-profile spec script that could've been written by Nicolas Cage's dumb twin in Adaptation, rewritten many times (once by Paul Schrader), the last time by Merhige, who added remote viewing and made something special out of it.

Sorry for replying so late - Jake, I haven't read that article but I'll take a look at it soon. Anonymous, thanks for the insights into the film. As for the script, yeah, it's fairly routine - this seems like a textbook case of a routine project, with little if any effort from writers/producers, that a director just tried - somewhat successfully - to get dug in on in an intriguing way. Is it widely known that Merhige introduced the concept of remote viewing though? (Or did he amplify its visual/affective dimensions in the storyline, which is my hunch for what he did.) At any rate - best of luck finishing up the book, I look forward to it.

This cannot work in fact, that is what I consider.