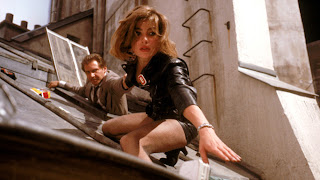 I'd never seen this one before, actually. (Spoilers follow.) Film begins and ends after the completion of a 'long journey' in which Harrison Ford and Betty Buckley are exhausted, drained, in the back seat of a car. Similarly, the film is also bookended by incapacitated women: Betty Buckley (just tired) and also Emmanuelle Seigner (expiring), who are in some sense the same woman. The replacement of the missing wife by a newer younger model is clear; the film presents uncomfortable and humorous situations in which Seigner is assumed to be a Parisian fling for Ford's vacationing doctor. (Infidelity aside, Frantic operates on principles compatible with some great I Love Lucy episodes...) The problems, for Harrison Ford, originate with the actions of these two women (this one woman) in his life, and so at a certain level—though not "the ultimate level"—this film is an abstract essay on man's difficulty in dealing with woman. Buckley leaves (abandons) Ford when he's in the shower; Seigner doesn't follow directions to the letter and it is her mix-up with suitcases that embroils everyone else in this fiasco. Of course, the problem really doesn't originate with the women: for Ford could easily have popped his head out of the shower to hear his wife, and Seigner left an entire suitcase, rather than the Statuette of Liberty, in the locker because she was intimidated by a clumsy man who was following her conspicuously.

Frantic, if it tells us anything of practical value along these lines, illustrates that perception and miscommunication bear problems in transmission, in the in-between. The imago of Woman finds itself composited of these (masculine) anxieties about opacity, unreliability; but examined experience reveals something else. Seigner's/Buckley's shared identity is underlined by the fact that they both wear a red dress for part of the film. This is stressed both visually and verbally. There is also no indication given that Buckley sees her double as a "threat" to the matrimonial union. While everyone else in the film who sees Seigner seems to assume an affair, the wife asks no questions and voices no concern. They are like sister-wives in their one and final embrace, where Seigner's black leather jacket conceals much of her red dress as well as her fatal, bleeding wound. Would it be a stretch to say that here's a lightly-worn conceit about women & menstrual cycles that takes the alleged sexist-scopophilic origins of "the male gaze" and just plays a game with it?
(Side note: where Panic Room is built upon domestic fears of omniscience, even inside one's own home, and has an aesthetic that moves toward this end of the spectrum, Frantic is about isolation and limitations to one's perception and knowledge, the fear of being outside one's own domesticity. [Note the bewildering shot when Ford wakes up and sees, or thinks he sees, the Statue of Liberty. Ah, yes, the Seine has one too. A tiny replica of which was revealed to be the film's MacGuffin or Whatsit in the previous scene. Polanski makes images that have multiple axes of significance.] Frantic is founded upon what one fails to know, the speed and quality of knowledge that can be acquired about a desired and mysterious object. I should go further down this path in the future ...)
Nice touch: when the breakfast trays are brought into the hotel room, Harrison Ford puts one in its place and then walks across the top of the bed (without causing any coffee or juice to spill); an aside on the comfort of the hotel beds?
Who else ends their films like Polanski does? He strings out conclusions, stretches them like an accordion, makes them yield their mysteries in full abundance. If the "classical" film narrative usually seems a bit pat, a way of tidying up all the interesting things that have happened in the film (Sarris makes this point somewhere; probably many others), Polanski is the rare filmmaker who makes his climaxes and denouements truly rich. Rather than the compression of all themes and loose ends into a neat bow, he achieves narrative resolution (of a sort) amidst all sorts of new or varied tonal brushstrokes. Unafraid to introduce new flotsam and jetsam, new colorations, into the mix even as his film is in its final reel. Sometimes what emerges are the manifest articulations of submerged content, subtext; betrayal, secrecy, marital infidelity (all that was hidden becomes visible as something plain all along). There are some Polanskis I haven't seen in some years (Chinatown, Repulsion, What?), and some that I still haven't seen at all (Knife in the Water, The Pianist) ... but every Polanski I can think of takes this stance toward finishing up a story. Bitter Moon has a glorious, beautiful, powerful ending.
Posted by ZC at 1:03 PM

What I say about this movie.Its just ok.Its all about man's difficulty in dealing woman.It also give one message that misunderstanding and miscommunication always cause problems.