Colors of Another World 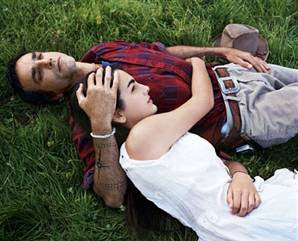 Everything in The Ballad of Jack and Rose is so lush. Breathtakingly picturesque. I'd love to live in this setting with them (as I would with Michel Lonsdale's pad in Munich). At the same time, two things. First: this is a community without any body odor. Plucked eyebrows and just-so bobo green livin'? It's a collaborative Ralph Lauren/Martha Stewart spin on the Woodstock's afterlife. (It's also downhome Americana-style magical realism: see also John Duigan's excellent Lawn Dogs, or for a less flora-choked approach, Steven Shainberg's Secretary.) Thank the gods the characters are at least shown to glisten with sweat. Second: the movie is thematized so as to be about its own utopic allure, that utopia's own Lauren/Stewart superficiliaties. It may not reach profound conclusions, but it's also not stupidly unaware. This self-criticism comes in the form of Daniel Day-Lewis's Jack, sure, and his various realizations or admissions of his own failures. But we are also treated to a layer of Breillaterie here, and Camilla Belle is employed as la vraie jeune fille. (Belle acquits herself just fine here. Is it a performance that asks a lot of her, though? I don't want to make a snap judgment but my gut instinct is that she wasn't pushed.)

For the purposes of those who haven't seen the movie, but would prefer no spoilers: The Ballad of Jack and Rose, written and directed by Rebecca Miller (Day-Lewis' wife and Arthur Miller's daughter), is about an ailing hippie father raising his beautiful adolescent daughter on an island off the coast of New England in the 1980s. The superb Catherine Keener puts in a performance as the father's girlfriend who brings her two sons to live with the father & daughter. There's a hint of incestuous feeling that makes the film more interesting than it would be without it; there's an air of liberal hand-wringing, too, about the failures of '68 and all that it entails—as though the middle-class, blue-state "lifestyle" is a good enough compromise in light of the counterculture's shortcoming's in morning's cruel light. To be clear: I do not claim that the latter is the position of Miller, only that it's an element in the film overall, and to which I suppose she and her collaborators bear an ambivalent relationship. There are always films made about the impossibility of revolutions. Tragedy, rather than comedy, is the narrative line which enlivens futile hopes.

I don't remember it well, but in the late '90s I really liked a mawkish (sincerely, unapologetically mawkish) Hollywood film, What Dreams May Come. Robin Williams traverses the afterlife, parts of which look like his wife's brightly colored paintings. Perhaps only semi-intentionally, this film communicates something about the libidinal, familial, even traumatic dimensions of fantasy, a fantasy for the beautiful (happiness a contract: 'beauty the promise of happiness'). It would be interesting to see these two flawed but highly personal, highly emotionally invested films side by side, look a little closer at them. 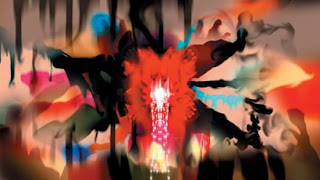 When Jeremy Blake's wife left this world, he too fell into all the colors (letting big blue take him).
Posted by ZC at 6:43 PM

Really useful data, much thanks for your article.