"But, of course, cinematic nudity circa 1961 was not quite innocent (i.e., nude) enough, and we cannot fully fetishize clichés of lost innocence where innocence was still suppressed, as it was in Wishman's previous Hideout in the Sun (1960, above), which, filmed in Nude-arama, falsely promised viewers an "escape to a modern Garden of Paradise where Nature's sun-kissed daughters walk forth in all their natural beauty!" This was a bizarre cultural-historical moment when cinema's gradual assault on decency could only pretend to salaciousness, when sun-kissed daughters could, in fact, walk forth in only some of their natural beauty. True, the naturally gravity-resistant breasts Wishman displays are anatomical marvels compared to today's stuffed, synthesized concoctions, and Nude's women are happily liberated from the brassiere manufacturer's contrived cleavage. But the lunar sunbathers' Sears & Roebuck panties dispel any whiff of lost Edens, while the astronauts' fixed foil codpieces, secreting the crux of virile privilege, ensure that the very notion of nudity remains so alien that it literally and forever belongs to a different heavenly sphere."

—Andrew Grossman, "Between Nudist Morality and Freudian Realism!"
Please forgive the quotations-heavy posting of late. One must get back into blogging like one gets into a frigid lake: either slowly, cumulatively ... or all at once. I'm taking the former approach. Some of these threads will find themselves woven into material over the next few weeks. 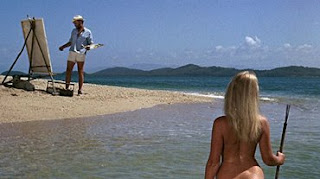