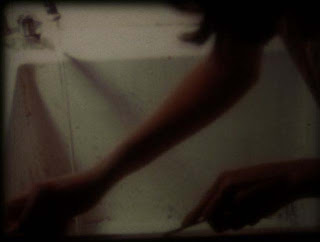 Once in a while I get to go out and see films. Happy to see, lately, a program of work from the 1970s by Coleen Fitzgibbon, who has been showing these at various festivals and other venues in recent years, with the advocacy & preservation work of Sandra Gibson & Luis Recoder helping her along.

Fitzgibbon is interesting, among other things, for having been a woman in the hardcore structuralist cinema scene. (There were not so many women making films in this idiom, as Fitzgibbon hereself testified.) And she said of Internal Systems, her 45-minute magnum opus, that back in the 1970s when more people were interested in this kind of rigorous experimental cinema, part of her incentive was: "You want structural film, I'll give you structural film!" Internal Systems (it also goes by Internal System, which is what is listed on the title card) is nothing but the recording of projector light, modulated according to mathematical adjustments to the camera's F-stop.

Pictured here is a frame from Restoring Appearances to Order in 12 Minutes, a 10-minute (!) film showing Fitzgibbon cleaning a big filthy sink. Eye-popping was Time Magazine (1974?), shot with a microfilm camera, an issue of Time from front to back, complete but in fragments.
Posted by ZC at 9:32 AM