James Gray makes movies that feel like the last movies ever made; films that were destined to be and to feel obsolete; his cinema is so good it makes virtually everyone else in Hollywood or Indiewood appear amateur. It's not that I really believe this—but I like the films so much that it's a thought that bubbles up sometimes.
* * *
Obsolescence is part of the charm not only because Gray is making "old-fashioned" movies, or because movies like these are rare in multiplexes. His virtues are classical ones, in the bigger scheme of cinema; appreciating him is a Lukacsian endeavor rather than Brechtian. His appeal is textual, which is not to say that there aren't fascinating allusive and intertextual qualities here: for instance Two Lovers nails its loose but pungent deployments of Rear Window and Vertigo, if you ask me—the citations are neither pretenses for meta activity, nor are they banking on loaned-out gravitas. (Even if one were both cynical and unappreciative of Gray, one would be foolish to say he freeloads off of Hitchcock or any other filmmaker, for the simple reason that if he needs to appeal to older texts for weight and mythology, he feels supremely comfortable gesturing towards Greek tragedy, opera, Dostoyevsky: if it's authority and status he's after, Hitchcock is small fries...) The Hitchcock blonde is also the shiksa goddess is also the shrewd portrait of moneyed upbringing is also a specter (the final scene) is also ... i.e., Gray works all of his thematics, all his allusions, all his textual levels into a cohesive multi-layered pattern with dexterity most directors would, must, should envy.
* * *
James Gray and whoever else was involved in casting Gwyneth Paltrow understand something essential about getting good performances from her: it is vital that one, at least in some way, works against the assumption that she is a wonderful, charming presence. Gray makes her a slightly obnoxious, loopy, fidgety rich girl and she's actually fantastic in the role. Joaquin Phoenix, too, could have delivered an insufferable performance (the role was ripe for it), but he balances all the necessary tics & mannerisms with a constant unfolding of a self—unraveling layer after layer of "character."
* * *
"Behavioral beauties."
* * * 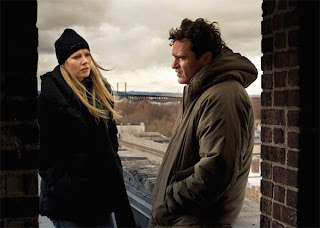 * * *
And still the money flows. Constantly flowing around the edges, under the surfaces, sometimes right before our very eyes.
Posted by ZC at 10:33 PM

I found _Two Lovers_ so strong that I rewatched _We Own The Night_. I can't say I turned around 100% on the earlier one, but I did warm to some of its project (still hung up on the dialogue, chiefly). But, yea: I think Gweneth's performance is just as crucial to this new film's success as is Jaoquin's full-body frustration, and all those looks into the camera. This is right behind that new Denis picture in some kind of already-under-construction (in a text edit file) polls list for 2009. I do hope the "hip hop career" gave this little gem some more eyes. If people just saw it, I feel like they would love it... for their own reasons as much as reasons people like you and I may have for enjoying its subtle citations and complex angles of performance.

I am still fucking astounded by this film, which refuses to leave my subconscious or stop interrupting my conversations (which now inevitably feature the phrase "Have you seen Two Lovers yet?"). I watched We Own the Night right afterwards--Two Lovers had been my first.

I have gone Gray. It's hard to think of a more emotionally intelligent / intelligently emotional contemporary American filmmaker. I've been working on a piece of writing about him for weeks now. But the films, maybe, are too strong. I can write words, but they seem empty compared to the films.

I've been looking for the opportunity to watch this film. I was not impressed with We Own The Night, but have great feelings about Two Lovers. Very exciting to hear good things.

I thought your analysis was incredible. I didn't read the Hitchcock thing into the movie at all. I will have to ponder your review.

I enjoyed it, but didn't read much into it.

I loved it! Just superb. Better than "We Own the Night" perhaps, but I didn't get to see the latter on film so I can't say for certain.

American cinema for all that it isn't right now at least has a small disparate, cadre of filmmakers who consistently produce interesting work: Gray, Eastwood, Mann, Pixar, and perhaps Fincher. Also, people are really in love with Reichardt right now, and I'd like to see what that's about

TWO LOVERS - what a wonderful film - but, darn it, I couldn't make it through WE OWN THE NIGHT...I tried..but just couldn't. Sigh.

I must watch his films!!

I am still fucking astounded by this film, which refuses to leave my subconscious or stop interrupting my conversations