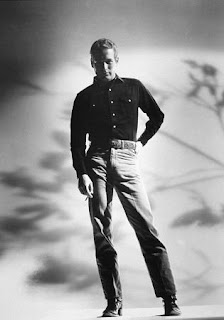 I'm still waiting for someone in the US to consider the late Paul Newman not only a very good actor (with a wider range than most in his generation, cfr. Rally 'Round The Flag, Boys!, Exodus, Torn Curtain, Harper, The Left Handed Gun...) but as one of the greatest directors since the late '80s. All the films he directed, since Rachel, Rachel(1968) I've found great. And one not even mentioned - because it was made for TV -, The Black Box, remains for me, with Histoire(s) du Cinéma, not only the best film of the '80s, but perhaps one of the very best made since. The unavailability of several of them on DVD, although The Effect of Gamma Rays on Man-in-the-Moon Marigolds is announced, seems to me strictly shameful!His work will rest with us,
Miguel Marías

Sorry I meant of course since the late '60s,
Miguel

Miguel, do you mean THE SHADOW BOX (1980)? I have never heard of it until you mentioned it, now I must find it! But I already thought, since the 80s, along with your good self and Jean-Pierre Coursodon, that THE GLASS MENAGERIE is a very great film. Raymond Durgnat, by the way, had a lot of time for SOMETIMES A GREAT NOTION, which he prefered to the pseudo- or sub- 'Hawksian' films of the 60s and beyond.

Of course you're right, I shouldn't have posted my comment so late, after spending all day in hospital with my wife, it's "The Shadow Box" (was I seeing things black?)and there's a DVD Region 2 (British, I think) of it. That's for me the best, together with "The Effect..." and "Rachel...", but I find very good the three other films he directed. I don't know of any festival who offered him a tribute as director, or a "carte blache" with film which he had admired or learnt from. If you or anyone knows of any interview with him on this side of his work, I'd be thankful to learn where. Much as I love and admire John Cassavetes and Clint Eastwood, I've always considered unfair the neglect (apart from part of the "Cahiers" people) of Paul Newman the filmmaker.
Miguel Marías

Miguel and Adrian, thank you for your thoughts--I will go on a Newman-as-director videotheque run sometime in a few months. Hopefully my video store has The Shadow Box. (And I hope your wife is doing better now, Miguel...)

Would you like to buy cdk or game card?

If your answer is yes, Please hurry up to make order on www.gmlvl.com and your desire will come true soon.

For the details, you can visit www.gmlvl.com!