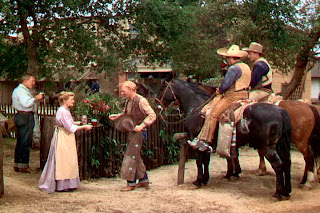 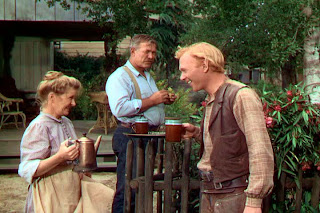 Near the beginning of 3 Godfathers (Ford, '48), one of the great Christmas movies (and it gets better each time you watch it), our "heroes" ride into town—John Wayne in command, Pedro Armendáriz in support, Harry Carey Jr. as the green recruit, still a little wet behind the ears. It's his comments—his openness to the cordial Mrs. Sweet—that perk up Buck Sweet's (Ward Bond's) ears and spur him from afternoon gardener into sheriff. It's been a nice meeting and visit, but Sweet is the one to get a leg up.

First he puts on his gun, 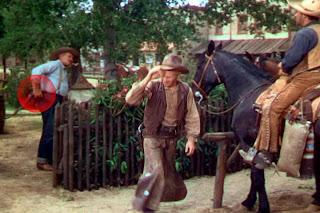 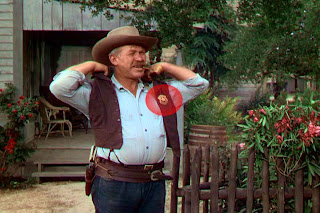 Ol' Sheriff Sweet gestures idly, once, with his cob pipe at the badge, an unreadable smirk on his face, just enough to impart an oblique, unmistakable message. John Wayne (as Hightower) is not amused. No pearly apples & flowers here after all. The communitarian demands of politeness and hospitality have been honored but the signal is given. The law undercuts nicety, the gesture, when it presumes to keep the social balance. Three ride out. Later in the film, the law and custom are honored (sort of) but are in fact undercut themselves by the bonds of community and love. 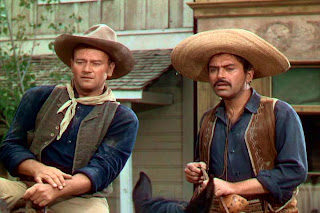