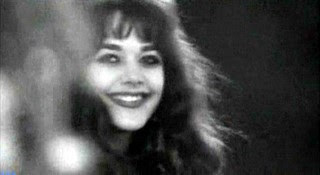 The airy, slapdash, and politically angry Tinto Brass film L'Urlo ('70) proved worthwhile if not especially special. The only other Brass film I've yet seen is Caligula and I'm glad I tried out one of his "radical" works before sampling the softcore porn that's made his reputation. It will help put the later ones, whenever I get around to any of them, in a certain context ... if I'm lucky. What L'Urlo has, in addition to a narrative content that would not be out of place in a repertory program among Themroc, late Buñuel, the Panic movement, maybe an Ivan Cardoso film, and some Makavejev and Chytilova, is a loose charm and the lovely, late Tina Aumont (pictured).

(By the way, I saw the film on video without English subtitles, so really this is just a tentative impression, certainly not an actual critical evaluation. Cult Epics has or will put out a DVD of the film to which I look forward.)
Posted by ZC at 12:35 AM

is this the one with Eric Hobsbawm in, do you know...?

If it is, I didn't have any idea, and not knowing to keep an eye out, I didn't recognize him ... but now I'll try to find out which Tinto Brass film he's actually in!

Apparently he is in one of the 'radical' ones somewhere...