In the moment of Amor de Perdição / Doomed Love where the spirit of Teresa appears before Simão on the ship, one sees the crystallization of a metaphysic previously submerged in the film's stagey style. Not competely unlike the historical cinema of late Rossellini or Rohmer's Perceval, Manoel de Oliveira's film--and presumably much of his historical/literary adaptation work of this period--puts into motion a story whose strange textures come from the tempo of the scenes and the spare, beautiful compositions. These compositions at first glance may often appear as "merely televisual," but which (like sudden shifts of sunlight entering your room from the window) can drastically alter into the most intensely felt kind of pictorialism. Where Rossellini moved his camera to restlessly investigate the space that the frame can't contain, one feels that Oliveira the hunter of images often knows exactly where to find his compositional quarry--and he pounces often when his companions, the viewers, least expect it. 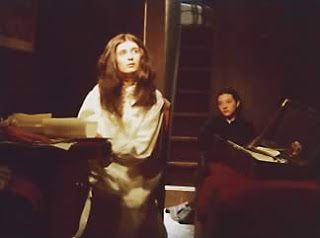 Such arresting moments come to head in the scene illustrated above, where the film literally demonstrates the metaphysical dimension of this story. And I am still pondering the meaning of the presence of Mariana, the third woman in the triangle, the unrequited lover and angel, in this shot.

The Angel of Compassion

In the Movie Mutations letters, Raymond Bellour mentioned civilization, "a word far greater than cinema"; "There is a name that goes with this word: de Oliveira." This is not a bad proposition: is there a more civilized filmmaker than Oliveira? Well, of course we must define what we mean by this word, civilization, and that is no quick or easy task unless we invite glibness.

The great poet of civility of the 20th century, Patrick O'Brian, proposed a code of civility whose central posture is not a soft voice, peaceable 'diplomatic' manner, or feigned flexibility of opinion, but discretion. The civil being controls his curiosity, permits the other his privacy and anonymity. Asking questions, interrogation, is in the novels of O'Brian a more serious transgression against civility than flinging an unblunted insult or even dealing a physical blow. The forced (or betrayed) confidence is the most heinous violation. 'Question and answer is not a civilized form of conversation,' declares the wandering Catalan-Irish-Catholic (crypto-Jew) Dr. Stephen Maturin, United Irishman, physician, natural scientist, and British intelligence agent.

Oliveira's death kneel for (some part of) Western civilization, Um Filme Falado / A Talking Picture, is often if not exclusively interpreted as a conservative lament. It is my least favorite of the smattering of Oliveiras (from his very first to some of his most recent) I've managed to see. In it one sees this exercise of civilization sailing towards its inevitable doom. The Mediterranean legacy claimed as European by Europeans--from Portugal to the Middle East, the ship goes, its American comandante guiding a series of conversations with women Portuguese, French, Italian, and Greek.

This central question of the film is one of politics and cosmopolitanism. (Perhaps: to what point shall we embrace our adjacent Others as neighbors and allies rather than enemies?) If I too am inclined to tentatively read Um Filme Falado as a conservative artwork, as complicit in a Europeanist project I don't trust, I am placing it still in the context of Oliveira's work in general as I have slowly come to know its beginnings over the past several years. This is an artist concerned with, among other things, the representation of unrepresentable experiences the source of which exists in some unspoken spaces of social structure (hospitality, companionship, family ties, tradition) and the character of which finds its displaced representation in the likes of hierophanies and such. Espelho Mágico is a wonderful film and seems more wonderful each time I think about it. It is one of the most brilliant films, I think, about the nature of religious devotion both private and social, and the sources and uses of images that are not artistic (too often we forget this about the potential and the historicality of images!).

Amor de Perdição very gradually realizes this fundamental problem, which may or may not have its own brilliant treatment in Camilo Castelo Branco's novel, in depicting the metaphysical. The groundwork for this adolescent love story is an intense and ineffable experience; Oliveira conceptualizes and illustrates it as the intrusion of the everday by the rapture of utter beauty, something like the sublime but much closer to ourselves, a beauty that is not Other to oneself. (This is to say that I am referring to metaphysical experience, or experiential categorization. We may not have a spiritual or metaphysical realm as such; something like free will may indeed be an illusion: but their experience is real, or real enough, and socially recognized, and so its potential absolute truth is rendered almost meaningless, and its realized social truth is paramount. Oliveira documents the social and its conventions: his object and his framework are civilization.) One must not try to name this beauty, it can only be rendered and understood obliquely--such as the moment when Simão tells Mariana that he is unhappy because he cannot make her his wife, and the narration informs us that Mariana could not understand him but her spirit rose to meet his meaning. The truth of the intense experience of Simão reveals itself to her in describing, simply, what he cannot do--the urgency of his imperative makes itself clear to her, and in their embrace (one of the saddest shots in the film, as with Mariana's parting kiss) inheres this mutual comprehension.

If civilization, or rather the most honorable ethos behind it (and civilization itself is not, I think, honorable), involves the respect of the other person so as to avoid interrogation, I am beginning to suspect that Oliveira's cinema is about the passages by which truth is transmitted by means of conversation and other forms of intimacy, and not always asked questions. This doesn't mean nobody asks questions in Oliveira; I'm sure there are tons of examples. But the experience of his work I have, the way I think of his cinema that I've seen, is one in which conversation at its most discreet and attentive and compassionate becomes a unifying principle--not just talk, but form.

Sometimes the torrential emotion, transmitted through oblique intimacies, is indeed this sort of metaphysics--maybe not "true," but "true enough" because its characters believe. The spirit of Teresa is true, and real, because we know the parameters in which she appears.

I said to Jonathan Rosenbaum after the screening that rather than his claim about Dead Man, maybe this 262-minute film could be perversely suggested to be cinema's longest death scene. In a literal sense of course this is not correct, but the principle underlying the narrative, the "doom," makes it seem to me as though the death that eventually comes is more preordained than in just any old film, just any other film.

The NYU Responsibilities of Criticism conference (with Jonathan Rosenbaum and Adrian Martin and the blogosphere's own Girish Shambu), about which there have been a few mentions and allusions on the blogosphere as of late, turned out to be a great success in my eyes. I think there was unfortunately some confusion as to just how "public" it was, and to tell you the truth after having attended every minute of it, I'm still not sure precisely how much it was both technically and realistically to be a university-centered event. At any rate the mix of people, from various levels of NYU (undergrad, grad, faculty, alumni) along with some other area cinephiles and writers and professionals, managed to make for a very congenial atmosphere. Kevin Lee, whom I had the opportunity to finally meet though we've surely attended the same New York screenings countless times, has already put up some summaries of the talks on his website. Aside from Nicole Brenez's last-minute absence (which broke my heart!) things went swimmingly.

Both Jonathan and Adrian spoke, on Thursday night, of coming full circle. Jonathan, in his time at NYU and living in the Village, talked about seeing films in this very area, buying his first issue of Sight & Sound practically around the corner from the building in which he was speaking. Adrian mentioned the pleasures of meeting so many people he knew and worked with in a great number of venues--journals, festivals, online correspondence, etc. As I told both of them, for myself and surely many of the other attendees my age, this was a very important culmination of roughly ten years of cinephilia, in which the Movie Mutations letters helped spark and maintain a certain passion and, I hope, broad inquisitiveness in the cinema and the world.

Those who came to the conference included former instructors and professors of mine, peers in the grad program, a few film critics and programmers, cinephiles-at-large whom I see all the time on the repertory circuit, some professionals and scholars from outside of NYU, and at least one ahead-of-the-curve undergrad film student. There were plenty of individuals, from NYU and otherwise, that I would have loved to see there and who may not have been able or aware to attend. But as a group, as a whole, I am grateful that there remained a certain measure of intimacy and bonhomie about the entire event, from the Thursday night talk and screening to the totally unofficial coda at the Brooklyn Academy of Music last night, where many converged to see Amor de Perdição straight through. (Contrary to most showings, as Jonathan informed us, there was no intermission last night!) This motley congregation of people I often see at varying frequencies and in different modes of life (scholarly, socially, cinephilically, online) cohered with perfect and unforced looseness. Truthfully, for me, it was a decade of cinephilia and thought finding a certain closure and, more importantly, a certain renewal. In a way it was like coming home.

(Thanks to Paul Grant and Martin Johnson for organizing the Responsibilities of Criticism event. And thanks to Adrian, Jonathan, and Girish for participating.)

Zach, I very much appreciate the feeling of your participation at the conference. Thanks for offering up your own take.

Zach,
As a way of framing your posts within some context (besides my having read this blog for a while now), what are you plans professionally? You mention a grad program? Is this a criticism program, film studies, etc? Your posts have always had an incredibly generous spirit, indicating at least one characteristic of a truly great teacher.

Joel, that's a kind thing for you to say, and it pleases me to hear it. My professional plans are in academia. I'm getting my MA in NYU's cinema studies program (part-time, while I work full-time at the same institution, taking advantage of my tuition remission benefits). I plan on going to the PhD--somewhere--and from there, to teaching & writing.

I don't write much here about my academic adventures (such as they are!) for several reasons, including the fact that it's an active part of my everyday, non-virtual life, and EL has been more of sanctuary for some of my thoughts that I don't necessarily (get to) express in everyday conversations.