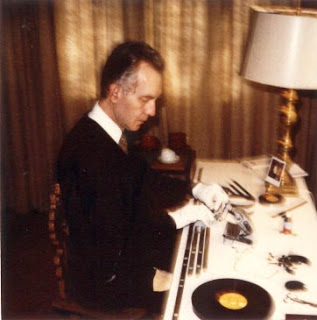 Last night I had my first encounter with the work of Gregory Markopoulos. Eniaios IV, "Nefeli Photos," reel 2--a half-hour of incredibly beautiful, fleeting images working on my eyes and mind in ways I hadn't experienced before. It was easily the highlight of four consecutive Views from the Avant-Garde programs I saw, the last four of the weekend. (Not to say there wasn't strong work elsewhere in these programs; there was, probably Breer & Farocki's work most of all.) But this tiny excerpt from the Eniaios project (an 80-hour-long opus) seemed extra-special. Rhythmic arrangements, slowly unfolding a space, shafts and orbs of light, afterimages and sillhouettes, the most austere apportionment of unforced beauty (spread out over time, like a web spun--perhaps by the spider seen in the opening minutes), the interpellation of History (a Byzantine church as a physical space--a room--but also as a mode of vision and of experience, that is, a way of being and feeling). Each shot is carved, like sculpture, in both space (many of the shots are largely shadowed, so you're seeing maybe two-thirds black frame for an image, the bright light and colors resting like a block amidst the rectangular composition) and time (they appear fleetingly, for a few frames or a few seconds, and disappear into the void again, and we pass them like landmarks and mile markers in our film journey [apologies to Doug Cummings]). At one point I thought to myself, 'All told, this Eniaios has to be the most amazing cinematic achievement ever.' It's not even as though this particular work/segment itself felt like a "masterpiece," a monument--it seemed almost earthy, everyday, rather. But I think that it was just working at such a high level, in such an incredibly rich, economical register, that you could start to speculate what its companion pieces might look like, what directions it might go on. Surely it's only speculation; and what do I know, this is the only Markopoulos I've even seen? But this is how it moved me.

Markopoulos's contributions to film form begin with his earliest work of the 1940s, develop through the subsequent decades, and culminate in ENIAIOS, on which he worked during the final years of his life. His important innovations, such as editing with the smallest unit of film (the single frame), and the simultaneous narrative of past, present, and future, or his most individual use of colour, are all directed towards the representation and resolution of complex emotions. These innovations prefigure many contemporary practices in the arts. (source)
Posted by ZC at 7:30 AM

Arg, I guess they got the 16mm projector working and I stupidly bailed after waiting around for an hour an a half! Sound amazing, I really hope I have another chance to see this...

Yeah, I felt bad, they started calling everyone in about five minutes after you left!

i'm so jealous! where did you get to see this series?

Hi Shahn, it was at the Views from the Avant-Garde sidebar at this year's NYFF.

Hello, my name is Helen Griffiths I recently got told that I should talk to you about French new wave films I was referred to you by Irvin, would you be willing to give your opinions to me about your ideas on the French new wave and the auteur theory. Id like to state now that I'm not asking you to do my homework for me as I have been given a lot of abuse on forum websites due to people not understanding what I am trying to achieve, I just want your views on it so I can put it into my primary research under the opinions of others... would you please reply to me by email so I could keep an account of it.
My email is 4530@stocktonsfc.ac.uk
Thank you so very much for taking the time to read this and I hope to hear from you soon


"I’m doing a critical research study for my A level media examination, into the French new wave era which was a movement in the late 50's to early 60's which was said to have changed the production of film making forever.

If you know anything about the French new wave, please reply to this post with answers to the following questions to help me with my primary research.

1) What/why do you think the French new era was so influential even today?

2) Do you believe in the auteur Theory? (the idea that a director leaves a signature of himself within the film) If so can you tell me any examples of films where you see this present?


If you have any other information that you think would help me with my study i would be very grateful to receive it!

Thanks for taking the time to read this.
Helen Griffiths"