De Palma Image of the Day *

* (Not necessarily a daily feature.) 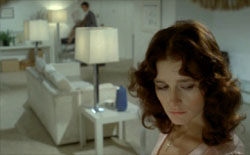 A severe diagonal composition here, predicated upon the splash of color and of darkness: a woman's features (a woman whose "guilt" becomes part of the subject-matter and fabric of the film--like Carrie, like Femme Fatale). De Palma's images come to us pristinely but with unsettling formal properties--they are not always balanced, or are balanced all too readily (hence his penchant for split-screens). Something pent up may explode. An image like this one remarks upon the psychic state (as well as its fictive, dramatic energies!) of the woman-figure, the chosen protagonist, an underdog.
Posted by ZC at 7:34 PM

I like this idea--an image followed by a brief exegetic riff--and vote for its possible incorporation as a regular feature on EL!

This had better become at least a weekly feature. Shamed I didn't think of it first.

Well, I'll see what I can do. Why don't 'De Palma Images of the Day' (or something like it) become a regular fixture everywhere? Maybe you can do a pithy something on a DP still on Canses Classeled, Eric, which would inspire Mubarak upon a longer reflection upon the film in question, which would then give Girish the idea of having a blog-a-thon on a particular actress in that film ...

Wild horses couldn't tear me away from contributing to a blog-a-thon on any given De Palma film. (There hasn't been a single-film blog-a-thon proposal since Code Unknown, I note.)

Tomorrow's the one-month anniversary of my last post, so I'll commit to a De Palma still in honor.