In 1990's Tremors, where a tiny Nevada community fights off a handful of giant subterrannean predator worms, Michael Gross and Reba McEntire play a pair of desert survivalists with a huge home arsenal. (They're not the film's protagonists, though.) Burt and Heather are a bit paranoid and kooky (at least this is how the others see them), but they're also essentially decent people. Another character references their "lifestyle" in a teasing manner, but it's neither intended nor perceived as a kind of eternal semiotic warfare against one's neighbors who happen to think differently. That is to say, Burt and Heather are capable of sitting around a table and having a conversation with their fellow citizens. And even the character who does talk about their lifestyle is Fred Ward's Earl: a beer-drinkin', shit-kickin' laborer who would in 21st century parlance be labeled "red state" through and through. But not when this film was made - a character like Earl could actually poke fun of a gun nut like Burt without there being some hugely divisive cultural enmity felt on either side. At a few points in the film, Burt and Heather's weapons are very useful for the whole group in battling the graboids. But they're never more necessary than other characters' tools or ingenuity. That is, the community is greater than the sum of its parts, and no particular part assumes synecdoche-like sovereignty. We can't "decode" a political endorsement from the role the gun nuts play. 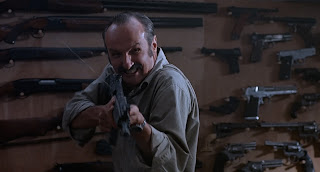 I could not imagine a 2013 version of Tremors that did the same thing. Instead I can only envision some variation in which Burt and Heather's Second Amendment shrine ultimately guarantees the safety of the community (the conservative version) or instead fails and allows a platform for some force unrelated to firearms to prevail (the liberal version). Either way, the gun and the gun nut are figures to be "politicized" in a way that openly invites some kind of ethical-political-moral interpretation. (Cf. past rumblings on this blog about reversible or diffuse cinema.) It would be the kind of thing that would allow Slavoj Zizek to publish "think pieces" about how "the Left" needs to embrace more fully such ideas as powerful leadership, discipline, and purity.

... Believe it or not, I've actually seen all four Tremors films, and a significant chunk of the USA television series. But it's been a while, and I can't speak from memory as to how later developments with the character of Burt in the sequels end up anticipating (or not) 21st century gun control debates and the cultural politics thereof.
Posted by ZC at 10:03 PM