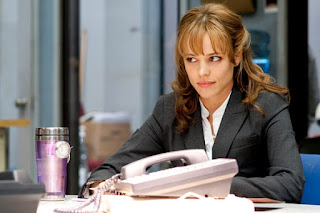 I have unspecific recollections that other people I've listened to have said this before, but ... for purely commercial cinema, 2010's Morning Glory is shockingly decent.  Not "subversive"; nothing "smuggled": it's simply a product with narrative content that is honest and expressive in contrast to most Hollywood releases: there's a faint trace of 1930s-40s classical Hollywood in this movie.  (Perhaps it's because it depicts a world of busy invention and constant improvisation, not unlike the production plants of classical Hollywood themselves.)  Rachel McAdams plays a 28-year-old morning show producer, Becky Fuller, who loses her job in New Jersey.  She gets a shot at a low-rated morning show in New York at the station IBS.  There, she is soon expected to raise flagging ratings considerably if she wants to keep her job and to keep the show on air.

The apartment she moves into in New York, while nice-looking, does not seem spacious in the way that commercial fantasies about "life in New York" often do; nor - if I recall - are there any guarantees that she even lives in Manhattan.  (Imagine a happy professional woman living in - gasp! - an outer borough!  One of the many execrable things about, say, Julie & Julia is how its contemporary scenes present Queens as a hellhole.  For a movie about the magic of cooking, one would hope against hope that a movie would recognize the culinary miracle Queens represents.  But I digress...)  There's a tough scene in Morning Glory between Becky and her mother where the latter explains that this dream of "making it" in broadcasting was adorable at age ten, inspiring at age eighteen, and embarrassing at age twenty-eight.  "Stop before it becomes heartbreaking."

This is a common gesture in recent cinema and television.  The arrested hero or heroine confronts "maturity" through some task or job, a direction in life.  This sense of direction seems to be everything.  Or maybe we can say it seems to be everything in this Hollywood material that is not exactly about precarity, but is in fact profoundly informed by it in its premises and in its assumptions.  This is, after all, a movie about an adult woman - still youngish - who loses her job abruptly, and feels lucky to get a chance at another measly job, for lower pay, at a struggling organization.  This is not "political cinema," yet it is nevertheless a movie speaking directly to a public that knows what it is like to never get a lunch break or to see highers-up freeze pay raises and cut benefits.

A quick note on a name: Becky Fuller.  "Becky" is plucky, it is forceful yet informal.  In the 1930s, RKO adapted Vanity Fair under the name of Thackeray's heroine, Becky Sharp ('35).  Fuller connotes plenitude, but also echoes a certain economic pluck (e.g., Lucille Ball in 1950's The Fuller-Brush Girl).  Plenitude is what Becky Fuller is after, but the movie dramatizes this not as economic fantasy but rather the richness of community.  If we can pay the bills, and eat all right, how many of us would not be happy - simply - with a workplace of labor from which we do not feel alienated?

Whether or not Becky's labor, and IBS's mission, is alienated in the Marxist sense is beside the point insofar as we're trying to figure out what the film does or says.  (I certainly don't claim it's anti-capitalist, or anti-hegemonic.)  But I think it is meaningful that the film designates as its goal a workplace where the feeling of community is important.

And it does something else interesting: it pictorializes the same relation to audiovisual content that I would imagine its audience also has.  Well into the film, Becky Fuller pushes the segments at IBS's show toward the ridiculous, the attention-grabbing, the viral.  We are treated to several shots of laughing Becky reacting to these clips, readymade for YouTube.  (Matt Malloy plays a correspondent who gets pushed into segments on rollercoasters, skydiving, etc.)  Harrison Ford plays a semi-retired serious evening news anchor who reluctantly takes on the role of morning show co-host; his character and Becky at a few points debate explicitly the merits of addressing what we might call the "public sphere" of old-school news discourse, versus the all-consuming and pre-emptive need to get ratings up by grabbing and keeping attention.  Becky, in fact, must satisfy the demands of ratings in order for her and her co-workers to earn a paycheck, and therefore lack the material circumstances even to consider the cultivation of a serious, grave, and ethical journalistic culture.  The movie does little to contextualize or question Becky's position, but what's interesting are the inferences we can draw from how it's all structured.
Posted by ZC at 10:48 PM

The film is certainly reflective of the contemporary job situation for much of the viewing public – sudden redundancy, no stability, long hours etc. – and it is significant that this is not foregrounded, at least in terms of the concerns that usually go hand in hand with job loss. With respect to the writing, the film seems to reflect the current economic climate, but also the need to modulate the depiction of the experience of, or expectation of, job loss – especially with respect to the protagonist, who is in her twenties – perhaps because of the frequency with which it can happen, to one individual even?

Becky is shocked to be let go (more surprised because of her ability and loyalty than in fear for her welfare) but then she herself fires a colleague without a second thought, within five minutes, on her first day at her new job.

Becky’s tireless devotion to her job is masking a problem; it is evidently rooted in the absence of her father – something that Mike (Harrison Ford) guesses might be the case, but it is only said in passing as a cutting remark.

This might have been a good opportunity to explore the economic circumstances that could rightly be understood as causing such feverish devotion to work among the employed, and its effects on family and close friends. Becky herself appears to lack a long-held support network, but this is not explained as being determined by the effects of the recession and how it is shaping attitudes to work in those who have jobs.

Importantly, the film does not entirely equate Becky’s working behaviour with the fulfilment and career opportunities that she ends up with, but rather she learns she will have to change.

The lack of a social life, of friends even, and the concern of her mother – expressed in the quote that you singled out – is actually alarming. And it certainly doesn’t glamorise ‘hard work’ in the way that it can be these days; now that we can be constantly ‘wired in’, at the office even away from the office. Of course, the nature of her job does explain the need to keep up to date, to a large extent.

But one character in the film has the sense to challenge it openly. Her boyfriend is, surprisingly, not the agent of this ‘wake up’ moment, but rather it is Mike. Her endless slogging away to affect the distribution of numbers on charts, the angle of a line on the ratings data, is replaced by a healthier, collaborative approach to genuinely creative work. Okay, so a lot of it ends up on YouTube and is a little ‘lowest common denominator’ but, as you said, the staff come across as improvisational and energetic.

Since her fellow studio hands aren’t aware of the impending termination of the channel, there is none of the usual personal worry driving the turnaround, which gets the ratings back up. The upshot of this and a credit to the writer is that the surge of energy and creativity in the workplace, which fosters that ‘feeling of community’ that you point out is not portrayed as being simply a stock response to possible job loss (which though it ordinarily might result in a happy ending does not say much about its characters). Becky pinpoints the problems with morale: it is Mike’s lack of willing, of caring about what he is supposed to be doing. It is not the threat of being fired.

Interestingly, Becky mentions that the sheets of ratings figures make sense in the fine details, but overall they are not changing, whereas the YouTube hits are a truthful indication (it doesn’t convince her boss) of the popularity of the weatherman. Rather than simply relying on the calculations, forecasts and averages measured by management, a simplified and fresher audience-feedback approach is taken, engaging with the social networks and responding to exactly what people enjoy, which gives the crew their momentum and is a reflection of how business and social networking is interweaving now.

The film makes it clear that other people can easily prevent even the most determined careerist from reaching their goals. This need not necessarily lead to underhand tactics and the hero outsmarting her antagonist to take her place at the top of the corporate ladder. The selfishness of Becky (to just do what needs to be done to get the ratings up, including firing, hiring and jeopardising a healthy relationship to move a step closer towards her NBC job) and of Mike (to refuse to stoop to anything less than rigorous, economic and political analysis, nor work within rigid contractual terms and conditions) is eventually resolved into collaboration, respect and sacrifice as well as closer engagement with the public at large and Becky certainly seems to be fulfilled by this. That’s a pretty palatable message.

Yes, inasmuch as we can discern a singular message in Morning Glory it's along the lines of 'how to cope with precarity.' Not revolutionary, but honest about certain economic facts that affect residents of the capitalist center in a way that not all Hollywood movies are.

Those scenes involving YouTube stunts & attention economy point to a more, I suppose, ideological strain in the film. (Ideological as in the sense that this is ruling class ideology in terms of what assumptions are entertained in the narrative, by its very structure as well as its characters.) It's as if Becky et al. are mirroring - or are they demonstrating, or both? - this film's audience's own perceived reaction to news ... the appeal of spontaneity and "fun," the flexibility (viral videos versus the national public sphere broadcast model), the fact that ratings will trump content, so content must seek ratings, and as a result will be mutated by that endeavor.

Thanks for your comments!

Glad to see some respect for this film. Here's my review for what it's worth: