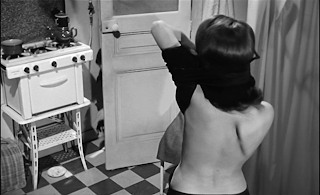 Les Dragueurs (1962, above) inaugurates my informal, long-term project to explore Jean-Pierre Mocky's comic-thriller universe.  Yes, J-P Mocky, "whose giant oeuvre has yet to really be discovered in English-speaking territories" (says Craig Keller, rightly so).  Existing tonally somewhere between the poles of sweet nonchalance and winking Weltschmerz, this strikes me as the work of a "man of cinema," though perhaps not quite on the same level as the Nouvelle Vague's brighter lights.

Here's another JP: that is, Donleavy.  I recently read the classic cult novel The Ginger Man and can't for the life of me figure out how it would be turned into a film (starring ... Johnny Depp?), without it being a wry, slow-paced, darkly lit vignette-construction of hunger, mildew, and lechery.  Actually.  Come to think of it, that doesn't sound all that bad.  Cross between Withnail & I and certain scenes from Bela Tarr.  I wonder if the teleplay from 1962 still exists in any available form.

Darezhan Omirbayev's Kairat (1959) is full of clean images, a lot of sequences and sameness (open fields punctuated by railroad tracks like in Saless' Still Life); there are queued lines, beds, tables, compartments, etc.  The same would appear to be true for time - a procession of days, interactions, trips to the cinema.  Omirbayev had his day in the (slightly overcast) sun a little while ago - why does it seem nobody talks about him anymore?  Is it only because he hasn't made a film for a few years apparently?  Film culture, sooner or later, will have to get over its fascination with novelty.  (This refers to both the level of aesthetics and the level of circulation.)  Give me a very good film from 1992, like Kairat, over a merely "talked about" film from 2012, six days of the week.

Very gradually I realize one part of the (submerged) rubric by which I judge a lot of recent American microbudget cinema is how it seems to deal with the class privilege supporting so many of its characters.  The smirking nonchalance with which certain mumblecore figures, on-screen, abandon jobs to do things like "live in my own head" (to paraphrase what Kentucker Audley's character says in his slightly annoying, yet charming, Team Picture) seems panic-inducingly cavalier to a person like myself, who lives paycheck to paycheck. One can live, parentally subsidized, in a nice East Village apartment.  Or one can occupy very modestly a communal house in Memphis, paying only subsistence fees.  Either way - but as a character points out in Whit Stillman's Metropolitan, the mere expectation of financial security serves an important role in suturing the identity of the bourgeois individual.  Yet I am not lodging a one-sided complaint.  The tensions are part of what makes the films interesting.  There is also this problem of sour grapes, and of envy.  One can be envious that a person has the means to opt, partway, out of the money economy.  One can be, simply, jealous that another person has the opportunity to live without the pressures of an inane job, and has found a measure of contentment just hanging around, eating coleslaw (Quiet City), watching Bela Tarr DVDs (Marriage Material - an excellent film), strumming guitars (everything), as unfocused as an artsy middle-class 20-year-old when you're 40 (Uncle Kent).  And all of this is what makes this loose confluence of filmmakers (Swanberg, Bujalski, Audley, etc.) difficult to be indifferent toward.  There are number of so-called "mumblecore" movies that aggravate me to no end, but this is nevertheless work that has hooks.  If some of the films suffer from class-based myopia, it is nevertheless to their credit that they strive to engage with lived experience as it is not presumed to be entirely filtered through the simulacra of other media objects.

I missed the print of Lancelot du Lac when the traveling Bresson retrospective came to town, but I watched the film again on DVD recently and thought it holds up incredibly well on fourth (?) viewing.
Posted by ZC at 4:26 PM

Thanks so much for the post, really effective data.

It's gracefull to see what i was searching for. That's the material which I was searching about. The matter you've highlighted above is surely valueable for anyone to workout. the concept of your article is very true and It will result in a positive way.