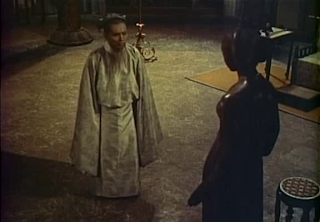 In memory of the late Damien Bona, I'm posting a list of favorite films from 1955 - which was his birth year, but also in his opinion (and that of many cinephiles, I think), an exceptional year for movies.
The older I've gotten, the more difficult it is for me to play the game of ranked favorites, and I'm eschewing numerical rankings for the more impressionistic proviso that this list is in roughly descending order of preference.  Some films are in need of another viewing (Kiss Me Deadly, The Tender Trap), even desperately so (Lola Montes, Floating Clouds).
The Long Gray Line (John Ford)
Les Maîtres fous (Jean Rouch)
Night and Fog (Alain Resnais)
The Night of the Hunter (Charles Laughton)
The Princess Yang Kwei Fei (Kenji Mizoguchi)
Ordet (Carl Theodor Dreyer)
The Tender Trap (Charles Walters)
All That Heaven Allows (Douglas Sirk)
Mr. Arkadin (Orson Welles)
Mosaik Im Vertrauen (Peter Kubelka)
Kiss Me Deadly (Robert Aldrich)
Summertime (David Lean)
Lola Montes (Max Ophüls)
Pather Panchali (Satyajit Ray)
Rebel Without a Cause (Nicholas Ray)
Floating Clouds (Mikio Naruse)
Violent Saturday (Richard Fleischer)
A Bloody Spear on Mt. Fuji (Tomu Uchida)
The Far Country (Anthony Mann)
Devdas (Bimal Roy)
Two Scent's Worth (Chuck Jones)
One Froggy Evening (Chuck Jones)
Knight-Mare Hare (Chuck Jones)
The Trouble with Harry (Alfred Hitchcock)
The Phenix City Story (Phil Karlson)
The Seven Year Itch (Billy Wilder)
To Catch a Thief (Alfred Hitchcock)
Some honorable mentions: The Indian Fighter (Andre De Toth), Moonfleet (Fritz Lang), Run for Cover (Nicholas Ray), Samurai II: Duel at Ichijoji Temple (Hiroshi Inagaki), Murder Is My Beat (Edgar G. Ulmer), A Man on the Beach (Joseph Losey).
If there's a title you're looking for, and not seeing ... it's possible that I've forgotten a film or two, or would categorize a title in a different year than you might.  It's very possible that I might not have seen a film - skipping over the likes of Tales of the Taira Clan, Mr. and Mrs. '55, Le Amiche, The Man with the Golden Arm, Strategic Air Command, and Shree 420, you should ask me about how life has conspired against me seeing the whole of Smiles of a Summer Night.  (Don't really ask - the stories are boring.)  And of course there's always a chance that I might not be crazy about a film that I've seen but which you might love.
Posted by ZC at 4:16 PM

It was a rich year, indeed. You might find a few more here (scroll down mid-page, obviously):

1955 is an amazing year! One could add so much stuff to yours already great list: everything Alan Dwan did that year - it was quite a run -, A Man with a Gun, Rio 40 Degrees, Man Without a Star, Dementia, The Girls of San Frediano, Death of a Cyclist, The Big Combo, A Man Alone, Sanda Wong, Wichita, Lyana... I guess one can go a whole year watching a weekly 1955 film and pretty much sseing just great/almost6 great ones.

Zach, what exactly is your opinion on the '55 Mizoguchi film (with the many names it goes by - Yokihi/Princess Kwei Fei/Imperial Concubine Yang, etc)? Do you consider it a lesser work as has been claimed? I saw it for the first time a week ago, and it seemed to possess, for reasons I can't fully articulate, a strong verisimilitude, and seemed, contrary to those other beliefs, pivotal to grasping the "power"(?) of Mizoguchi. Your thoughts?

Thanks for the comments everyone. Charlene and Filipe - I must say with embarrassment I've never seen any of the films mentioned (though most are on my radar). Particularly disturbed to be reminded that I haven't seen any '55 Dwan, or The Cobweb, or The Big Combo ...

(I might have seen Wichita years ago, but without consulting my not-quite-100% accurate viewing logs ... I doubt it.)

Chris - I really like Princess Yang Kwei Fei and if I wouldn't necessarily classify it as top, top level Mizoguchi, it's to be understood that this is in the context of a filmmaker who is high in the running for Greatest Ever. I'm not a Mizoguchi expert, there are plenty of cinephiles around who've seen - and reseen - more than I have. But I've not yet seen a Mizoguchi that struck me as lazy or sterile in any way. Yang Kwei Fei is no exception - there's a dynamism between the mise-en-scene, the "effects" (the omnipresent yet often subdued feeling that made - was it Daney? or JLG? - say that Mizoguchi was something like the only Marxist filmmaker) on one hand, and the verisimilitude you point out. He was a great filmmaker of societal totality. And this realism/artifice interplay that bubbles (yet needn't self-consciously impose itself on each & every other theme or dynamic) is incredibly rich. I recall loving the scene where the Princess revisits the kitchens - I think? - where she used to work, before she was "discovered." She looks at the maid who was in her place (both her role but also the physical place, the mental and physical orientation of stooping and scrubbing). Those are my two cents. But to comment in more detail I'd want to look at the film again ...

blogs in here looking forward to often visit your blog

I'll be visiting your site again to gather some more valuable information. You truly did a good job.