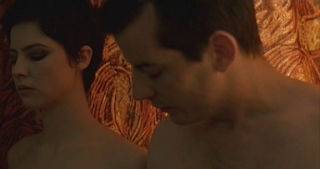 Various quotes from others that I've pinned down over the last several months, in hopes of working them into something or other, but I've either deferred the material I've put them into, or just couldn't come up with something big enough ... provocative points of departure, some of them ...

"The films of Philippe Grandrieux pulsate. They pulsate microcosmically: in the images, the camera trembles and flickers so violently that, even within a single, continuous shot, no photogram resembles another. And they pulsate macrocosmically: the soundtrack is constructed globally upon unidentifiable, layered, synthesised, ambient noises of breath or wind, sucked in and expelled, which underlie the entire film and constitute its disturbed heartbeat, returning to our ear when all other sounds have disappeared. In the very beginnings and endings of his films, over the credits, there is nothing but this strangely bodily sound." (Adrian Martin)

"Consumerism is a Calvinist sadist's word for "pleasure". Attacking rioters' "consumerism" is just saying they should have no pleasure.  There is a moralising left willing to forgive the rioters a little so long as what they are doing IS NO FUN. So long as its sacrifice for the commonweal, like these pundits subject themselves to in their commodity consumption. Watching The Wire isn't "consumerism" it's a duty!" (alphonsevanworden, back in August)

"The body of the movie could rethink itself into new forms across a 20th-century history of B-movies, the nightmare responses to the violent, daylight realities of women held at stainless steel ovens to smell cobbler and dream of their men at war." (Gina Telaroli)

"Nevertheless, I do not wish to suggest that we abandon radical political film theory, nor radical politics more generally. Just the opposite. What I would suggest instead is that we might take more seriously the dead-end that radical theory takes in its insistence only on displeasure, which is, as I am suggesting here, always predicated on a claim that truth is an unhappy event. For one, if we abandon the idea that the work of the political is the excavation of truth—and it is tempting not to do so precisely because we are so accustomed to denying the status of truth to any image that offends us—we might be in a better position to see the work that images can do in and for the social, especially as we come to understand the social as something that cannot be, and should not be thought to be, beyond representation. Likewise, if we understand the movement of the social as a process of representation, then we are in a better place to understand just how important it remains to think images politically, but to do so on the promise of pleasure instead of violence, happiness instead of deception. We might begin, then, by thinking about the terms of compromise and recognition rather than identification and interpellation. To proceed in this way is to bring moving image theory even closer to political philosophy, and allow us to both understand and effect change in the social along more peaceable and productive lines." (Brian Price)

"Although Lav Díaz arrives touted as an important new directorial talent, there's scant evidence to support the claim in his two featured films. The eponymous protag of his Dostoyevsky-inspired The Criminal of Barrio Concepcíon (1999) is a naive farmhand who gets involved in a kidnapping that goes violently wrong. This plodding drama, laced with ludicrous English dialogue, is not a total dud - it draws a good deal of strength from Raymond Bagatsing's beautifully understated central performance. Díaz's next effort, Naked Under the Moon (1999), a somewhat Bergman-esque tale about the limits of faith, concerns an impotent ex-priest and his tormented family. A chronicle of agonized morality, it's carved in lead." (Elliott Stein)

This last quote in particular should not, I hope, deceive as though its repetition were my endorsement.  Still, it can be illuminating to look into early reviews of important films or figures before wider critical recognition (and in some cases orthodoxy) kicks in.
Posted by ZC at 7:33 PM