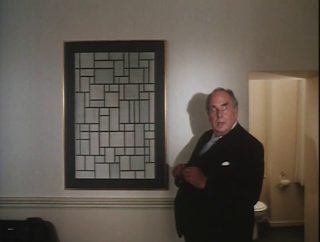 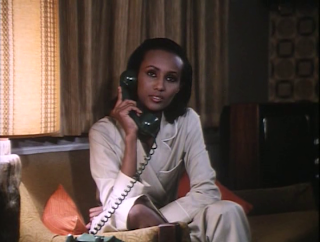 Watching a cropped video of a Preminger film seems almost completely beside the point.  Nevertheless, I tried this - as the avi file I had downloaded of The Human Factor proved not to be 1.85.  The film seems to remain "durable."  If its spaces are violated by the cropping, visually, they nevertheless appear to retain a certain character.  (Usually drab; always lived-in.)  This points to the tendency in Preminger to make his films work on a number of levels, overlapping, not simply "framing" - as though the frame is the only thing against which profilmic space interacts - but organizing materials together, putting them into a lot of smaller "frames."  And as any Hollywood director with a strong visual sense surely knew by 1980, television would likely crop, pan, and scan your most brilliant wide compositions anyway.  This travesty of aspect ratios nevertheless provides an interesting aesthetic challenge.  (Though I still would like to watch The Human Factor in 1.85, projected, also, of course.)  Favorite films that seem to "survive" a transition from widescreen to 1.33?
Posted by ZC at 9:39 AM

I still owe you a proper reply in the original TREE OF LIFE thread, Zach, but allow me to express my enthusiasm for THE HUMAN FACTOR (perhaps my favorite Preminger film), as well as my agreement with your terrific observation here!

Here's an idea, not necessarily connected to your post, and I'm not totally convinced by it, but it seems that the "energy" of pan and scan or bad cropping is that its impurity sort of doubles the voyeuristic effect of films by making its "restrictions" part of an accidental shamanic mise en scene that you have to create as a viewer. A very Ruizian way to watch movies!!

Peter - yes, it's a strong film in many respects. (And take your time on the response. There may still be yet more here on Tree of Life, which I saw for the third time last night.)

Anonymous - I'll certainly buy it. Have you ever experimented with pan-and-scanning yourself? The process very much emphasizes one's own spectatorial experience. (They have, or at least had, an interactive set-up for this in the Museum of the Moving Image in New York.) Destruction is creative, etc.

Of course I've played with psychedelic alterations of cinema, (I once watched Heat in a theatre where the soundtrack sounded like it had slipped into the realm of poseidon for the length of the movie, rendering everything beautifully unintelligible, but focusing the experience in an unduplicable way) but hasn't everyone done this -- maybe not..?

...cinephiles (speaking loosely of that wide-ranging tribe) usually fetish-ize certain "transparent" ways of seeing: There is a certain tendency towards desire and recovery of a platonic filmic object or its simulation, Blu-Ray, restorations, 70mm projection -- monstruous things that, as Cherchi-Usai points out, are even more false and disfiguring than the material paths/media of destruction that the cinema normally endures.

The first time I saw The Mother and The Whore, the first 20 minutes were projected without sound, and I couldn't have been more excited for the rest of the film. They rethreaded it and showed it again; much was lost and gained.

I think that your Human Factor, like mine, is open-matte, not cropped (check out the headroom!). Preminger's only non-Scope film post Anatomy of a Murder, I believe.

Ignatiy - I suppose this says something about the power of suggestion, even to oneself. I assumed that my digital copy was simply a VHS rip and that the VHS transfer must have been pan-and-scan ...

I think Ignatiy is right about this, Zach ! Are there any ever-hovering mics that are the usual tell-tale signs of an open matte ? I will never forget an inadvertent open matte movie preview (of an Altman movie, I think) that had one local Australian critic fulminating about how 'lazy' filmmaking craft had become these days - a trend he even bothered to label 'boom-in-shot cinema', haha !!

I'm pretty positive that Ignatiy is right. I own the French DVD that your avi is undoubtedly a rip of, and if you compare the still Fujiwara has in his book to the same point on the DVD, the difference is that there's added head room in the DVD. The effect being that everyone appears to be positively swimming in blank space.

The big issue is why is anyone framing films for 2.35:1 in 2011. It's ridiculous. An artificial ratio (as it was always determined to be) that can only get screwed up in the home.