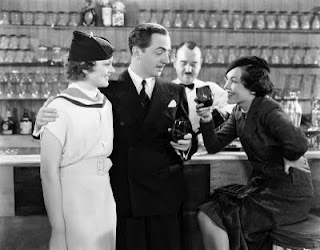 (Took another look at The Thin Man recently - wonderful!)


Skin. Viewers of the future will set their eyes upon the degraded remains of cheap 1960s espionage playboy movies (like Maroc 7, dir. Gerry O'Hara, 1967) and wonder at the skin of the actors, which the sun and smoke have dried out.  I was curious if any of the late stars of this little movie might have battled skin cancer.  A cursory search didn't reveal anything.  The history of tanned skin (caucasian, obviously, as this is the normative skin color range of Hollywood) precedes any given filmic event, interacts with the history of Hollywood style & glamor, and subtly infuses many color films and yet is difficult to pin down as something specifically aesthetic or technological or social.  We could rightly say it's "cultural" but this is simply to assign a nomination that is as diffuse and mercurial as the object ...

Medium specificity.  The other night I dreamt that I was in a big, well-attended movie house, with stadium seating.  Screening was a delightful avant-pop animation that took iconic images of Audrey Hepburn (particularly Breakfast at Tiffany's) and "reworked" them.  I felt very much at home in this crowded theater, and had spread in front of me several remote controls.  Obviously, these controls could be used to pause the movie, rewind it, or adjust the volume - as though I were in my own living room, sitting in front of the TV.  But it subsequently dawned on me that the policy of this theater was to allow no remote controls.  It wouldn't be fair to all the other patrons if you just paused the big screen at your leisure!  I felt panic.  Then someone else in the theater must have had a remote control, and must have tried to use it on the big screen, because patrons around him started to yell out, "Hey!  Remote!  Remote!"  As the authoritarian ushers walked down the aisle to accost the offender, I was at a loss as to where I could hide the array of remotes before me.  Why did I even bring them?  What gadgets did they belong to?  If I pretend they aren't there, can I trust the people around me not to see them, not to rat me out?  I awoke, bewildered.  That was a very strange dream.
Posted by ZC at 4:01 PM

An allegory for the act of criticism?

EXCELLENT MOVIES i'M GONNA SAY YOU SOMETHING i STILL WATCH THESE MOVIES BECAUSE TH FEELING WAS COMPLETELY OTHER AND ACTORS WERE MORE PASSIONATE.