Some spoilers follow.  A man of letters returns to his hometown because his buddies sent him thataway on a bus while he slept off a crazy night in Chicago.  Some Came Running balances between a number of transitions in American history.  Sinatra's Dave Hirsh is a former writer and an Army veteran - upon arriving at the hotel he lovingly takes Hemingway, Faulkner, Fitzgerald, Steinbeck, Thomas Wolfe, out of his duffel bag.  One of his love interests, Gwen, is a schoolteacher. 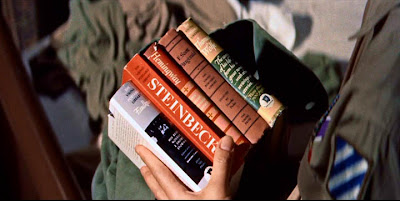 (Great male writers in worn editions.  It would have been a fine joke if Minnelli or someone had included a James Jones in there.)

A connotative, ghostly thread running through this plane is that of the postwar boom in higher education: the GI bill, intellectual self-improvement a la Mortimer Adler, manly literary concerns - these last are mirrored by the "frigidity" of Gwen, whose participation in the world of mind & letters seems to negate her ability to retain a healthy sexual autonomy, according to the logic of the world portrayed.  Gwen can only be depicted as a woman who "wants it" (and wants the man), but can't "admit it."  This sexist balancing act also echoes in a movie I half-watched last night, Delmer Daves' 1959 A Summer Place (both films feature Arthur Kennedy in an unlikable role), where a comparatively healthy middle-class stance on sexuality as voiced through Richard Egan's character, is counterbalanced by the monstrous sexual puritanism of Constance Ford's.  In Some Came Running, male characters constantly express disappointment with the women they've decided cannot meet their standards, and so must "choose" - between the Maclaines and the Hyers. 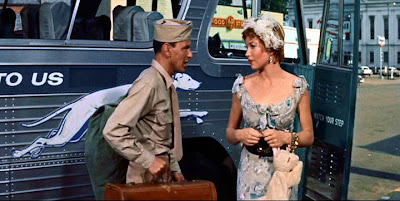 (Sinatra visually paired with the mobile Greyhound logo; Maclaine's character Ginny is just as rootless and mobile as Dave, but because she doesn't - can't - have recourse to a rational, educated, critical mind, her rootlessness is a demerit in the long-term.  She's a "pig," as Dean Martin's Bama would call her.)

This promise of male achievement - re-asserting baseline authority in the home in the post-WWII years, but also maintaining the virtue (or value) of mobility, self-propulsion - is met with crisis from the moment of its first expression.  A generation of higher ed students received an experience at colleges which they have then wished could be sustained and replicated, as a number of older cultural conservators indicated after the radicalization & subsequent "taming" of the University - these conservators with their dismissals of cultural studies, postmodernism, relativism, and so on.  (It's not that these critics in tweed have no good points; it's that their critique is also completely predicated on an unrepeatable time and place, rather than bearing a sustainable, timeless universality.)  Some Came Running reflects a rootedness to this period in US intellectual & public life.  This was a period of grown men given access to college life and college education, reading great writers, receiving great ideas.  The problem with this is that men become dissatisfied with the idea of marriage as well.  And yet, because men and women are not socially equal counterparts in this situation, the male dissatisfaction with marriage is expressed as a re-articulation of dominance, and a new set of complexes to work through.  The man expresses himself as complete in this paradigm, whereas women are divided a priori into types, never fully complete in comparison to the man.  If she were, she would be intimidating - a competitor rather than a partner.  A story like Some Came Running evades any reality of strong-minded, sexually independent, educated women ... either this is because the entire premise is sexist from the outset, or because the film deliberately addresses this imbalance and places it in a larger cultural dialogue of respectability versus garishness, and the socially-sexist privileges accorded to men, primarily, in negotiating that dialogue.  (I think both are true, and overlap in ways that make this movie so fascinating.)

So, as both explicit theme and as symptom, Some Came Running moves through a particular historical matrix of mobility (both class & geography), normative gender roles, and the powers & pleasures afforded by sanctioned knowledge.  The socially visible battleground of these markers of social, human difference is respectability (at the top: bohemians versus upstanding citizens).  The less visible arena is sex: when Dawn spies her philandering father in the dark (and the father & secretary turn the lights out in the jewelry shop as they're about to leave), or when Dave and Gwen consummate their ultra-brief courtship ... 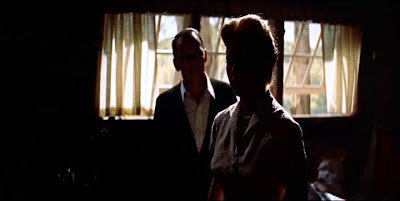 (Once sex becomes the central, explicit focus of the scene, the lights dim dramatically, "unrealistically.")

"Dave, you have a very exciting talent."  Dave, like Bama, can flee from intimacy at any moment, because they experience themselves as complete and have the imprimatur of rational judgment on their side.  The women, who may have the faculties but no sanction, must therefore express their own dissatisfaction only as symptoms of their perceived lack or shortcoming.  Thus, Gwen is frigid, uptight, unloving; Ginny is sweet, good-natured, pathetic, but ultimately incapable of mounting a defense against Dave's machinations.  The film makes this imbalance between the men and the women palpable.  Though the script doesn't verbalize this judgment explicitly, I have a hard time thinking that anyone could come away from Some Came Running feeling deeply disconcerted with the state of things.  Not every person is likely to come away with the same class/gender critique I have scribbled out here.  But there is a whole system of wrongdoing here, nonetheless, and I think it's a recognizable dimension of the film.  (Pedro Costa: "For me, the primary function of cinema is to make us feel that something isn't right.") 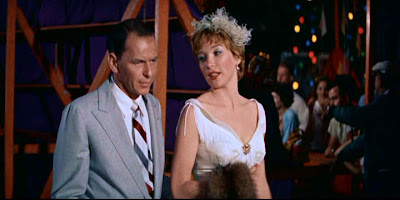 (Bright lights, high stimulation, low class: Dave Hirsh isn't a happy camper, despite the unmitigated selflessness of Gwen's love, which he treats like the carnival itself - fun, cheap, utilitarian.)

A common application of cross-cutting in commercial movies is to show a father or husband racing to "save" his special lady.  The climax of Some Came Running uses a similar principle.   (It's a wonderful scene for its crowd control.  That looks & feels like an organic crowd!)  I have not read Jones' novel but I hear that Dave gets it at the end.  In Some Came Running, the excessive sentimentality of Ginny's intervention somehow brings to the foreground everything that "isn't right" in this world being depicted.  Minnelli corrals the actors brilliantly in this sequence: the acting styles converge with character positions seamlessly.  (Sinatra - too cool, detached, dissatisfied; Martin - also detached, but in a different way, driving his car through a crowd of pedestrians; young Maclaine - trying so hard, excessive self-diminution; the mobster from Chicago - all frantic, focused, quiet intensity, the physical embodiment of the dangerous, mobile male, looking to enact his will for no other gain than the satisfaction of enacting it.)  Ginny-in-white turns her back to protect her new husband, falling "helplessly" into his arms after the shots are fired (she propels herself, she throws herself, she is herself propelled by the bullets) ... the first time I saw this film it felt painfully abrupt.  Too much, too fast, too unfair.  It's beautifully controlled and in pacing works in great counterpoint to the leisurely tone of much of the preceding movie.  This kind of pathos seems mawkish, telegraphed, yet utterly effective, and entirely in keeping with the logical progression of the film's themes and plotlines.  Suffice it to say that Some Came Running operates on multiple levels.
Of course I make all these suggestions without having done any research, without referencing other writers, without having fleshed out any of the implications of my comments to see where they might work - or fail - as an explanatory set of patterns.  This is the difference between scholarship and between the speculative, first-draft criticism I'm sketching out here.  One aims in either case to start making connections.
Posted by ZC at 12:31 PM

Great piece on probably the most neglected of the 50's super-melodramas.

I think it's interesting how Ginny's ultimate sacrifice is preceded by the palpable sense that it is Dave who has made a huge sacrifice in marrying her-- He's too "noble" to drag Gwen down, and even though he is basically indifferent/abusive to Ginny, he's willing to go along with the marriage out of some nihilistic resignation.

Also, isn't strange that all the women in this film work at a bra factory?

I've thought of this one as a "transitional" movie, too. The way the movie ends seems very critical of Dave (important that he ends up alone), but it doesn't seem to get to the point where it's critical of Dave's world view.

Jeff, don't the majority of women not work at the bra factory? (Gwen; Agnes; Edith; her mother, Jane. No?) But yes - there's a sense, toward which I suppose the film encourages ambivalence to say the least (not endorsement) - that Dave is partly aware of the selfishness that leads him to marry heart-of-gold Ginny, but also that he sees this slumming as a noble burden.

Which speaks to your point, Jon - I think the film presents a strong case against Dave's behaviors but at the same time I don't know how easily one could construct a more generalized moral stance against the entire framework of being & relating with the world. (Or it doesn't suggest or substitute a superior framework.)