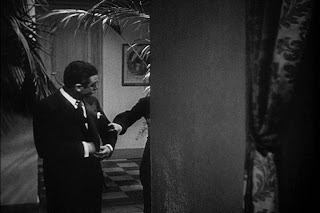 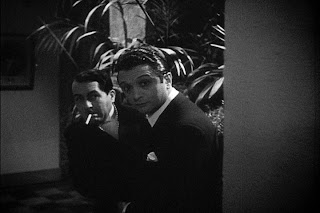 Composition in depth has, for our a/v century at least, still a lot of murky areas.  In the 1980s in a paper on space in Renoir, Stephen Tifft proposed that the "earliest directors had simply photographed theatrical spectacles from a fixed, central position, as though the spectator had secured a good orchestra seat.  Chafing at the documentary indignity of such rootedness, some directors began to rebel against these limitations by making the shot the basic unit of film language, and exploiting editing to move from one shot to another, one visual perspective to another, thus allowing the spectator to enter into its narrative space with a flexibility and vividness unparalleled in the theatre."  The exhilarating possibilities of moving through space with the camera are commonly tied to a network of sumptuous directors and cinematographers.  Strange, though (... oh but perhaps not so strange, really ...) how the anti-illusionistic practices of modernism and space in cinema often emphasized a lack of shadows, a return to something creators and/or spectators thought of as surface, pure surface.  Think of the bold, big primary colors in Godard.  Isn't there an anecdote about Hitchcock regarding his fascination with the shadowless white walls in the backgrounds in some Antonioni?  Is shadow associated with depth and thus with illusion, and is this why the bright colors and hard lines of so much mid-to-late-century modernist cinema avoided such shadows whenever bourgeois space was to be dismantled?  What of Gorki's kingdom of shadows, where its shadows are only a pretender to the throne?


Perhaps the bourgeoisie owned the shadows as well as Enlightenment.  Only so much left for a Maoist to work with.  Perhaps the only real(ist) shadows are those of the strictly literal emulsion; no represented shadows count ... no lines on the faces of Humphrey Bogart or Chishu Ryu, no depths into which we can be so gauche as to pretend to enter.


At the same time, if I'm truthful ... thank the gods for something like Grandrieux's Sombre.  Shadow is so important to the history of cinema that critics created a genre out of it (film noir), ex post facto, but I wonder somewhat idly if there has been even less work dedicated to truly exploring shadow and its possibilities than color.  (Even when people discuss composition in depth, and deep focus, the through line seems to be on designated clear spaces, lit spaces, perceptible spaces.)  The suggestibility of the obscure and the deliberately obscured is a wonderful sort of frontier ...

"Shadow, then, is in the first instance a local, relative deficiency in the quantity of light meeting a surface, and objective.  And in the second instance it is a local, relative variation in the quantity of light reflected from the surface to the eye.  There are three distinct kinds of deficiency, and they emerge clearly in a sixteenth-century diagram drawn after Leonardo da Vinci (fig. 2) ..." 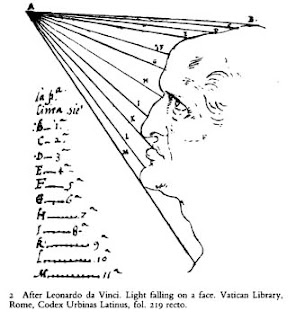 "The role of shadow as an object of perception, then, is bound to be regarded sometimes through issues of good or bad: help or hindrance?  Or better, perhaps, since shadows are a fact, which properties carry information, which are artefacts of the visual act, which are stable and which fickle, which are used in perception and which are ignored - in fact, how to shadows work, not just in the physical but in our minds?  It is noticeable that answers have varied widely according to people's projects and historical epistemes."  (Quotes from the late Michael Baxandall, Shadows and Enlightenment)

Maybe we sometimes talk about high-key and low-key as though these phrases in themselves conveyed much of significance to ourselves & to other people.  What's a lexicon to convey the three kinds of shadow demonstrated by Leonardo, the shadow of the underside of the nose, the shadow of the upper lip (corresponding to coverage by the nose), the shadow of the angled feature as opposed to that which meets the light straight on?

"25. In the cinema we can sometimes see the events in the film as if they lay behind the screen and it were transparent, rather like a pane of glass.  The glass would be taking the colour away from things and allowing only white, grey and black to come through.  (Here we are not doing physics, we are regarding white and black as colours just like green and red). - We might thus think that we are here imagining a pane of glass that could be called white and transparent.  And yet we are not tempted to call it that: so does the analogy with, e.g., a transparent green pane break down somewhere?"  (Wittgenstein, Remarks on Colour, trans. McAlister & Schättle).

Things to continue to keep in mind: the extended (implied?) depth of the emulsion or the stock or the format / the depth of the profilmic space / the vast range of negotiations and indeterminacy to be found in shadow spaces.
Posted by ZC at 2:04 AM

Hi zach, interesting blog & good post. overall You have beautifully maintained it, you must submit your site for free in this website which really helps to increase your traffic. hope u have a wonderful day & awaiting for more new post. Keep Blogging!