In interviews here and abroad, I have constantly denounced America's fetish for small female noses, a phenomenon that may be fairly recent in origin. It seems to belong to the Betty Crocker period following World War II, when domesticity was a primary value and when ethnics wanted to assimilate and become just as bland as the ruling, Protestant country-club class.

Diana Vreeland, one of the great, stentorian dragon ladies of the century, had a granite profile and a will of steel. Who is a better role model for young women today -- Fashion Empress Vreeland or NOW's sanctimonious Patricia Ireland, with her blankly decorous, WASP features and breathy little treacly voice? Vreeland, with her soaring imagination and theatrical flair, was a survivor of those two splendid decades after the passage of suffrage when female power ran the gamut from Martha Graham to Joan Crawford.

While growing up, I was inundated with detestably perky, button-nosed blondes like Doris Day, Debbie Reynolds and Sandra Dee, who seemed like sticky, walking marshmallows. (As an adult, I learned to appreciate the talents of all three women.) Barbra Streisand's arrival on the scene in the early 1960s was revolutionary: That aggressive beak of a nose, which she refused to change, was the prow of the battleship of the New Woman, whose feisty spirit preceded the feminist organizations that are falsely credited with all the energy, aspirations and achievements of my generation.

I'm concerned about young girls having nose jobs too early and getting stuck for life with unfixably juvenile features. Even Cher, who had a fabulous, haughty profile, succumbed to the social pressure and dully evened her nose out at midlife. Downtown Julie Brown is another fashion victim: She was very striking when first on MTV after emigrating from England but then immediately bobbed her nose. Now Courtney Love has done the same thing and reportedly has had to be dissuaded from a second operation -- the Michael Jackson Surgical Addiction Syndrome.

As an Italian-American, my premises are usually Mediterranean. I've always loved the aquiline Roman nose of senators and generals, as well as the sharp Greek nose, extending evenly without a break from the brow, that one sees on ancient statues of the Olympian gods. It's interesting that you mention Gillian Anderson, since strangers often tell my partner, Alison Maddex, that she resembles Anderson's Scully. All the women I've been involved with in a major way have had strong noses; it seems to be one of my romantic motifs.

Until women in the television and film industry come to their senses and stop mutilating their noses, America will be stuck with this bunny-rabbit model of womanhood -- harmless, appealing and hopelessly fluffy. The Woman Who Would Be President knows better: Gov. Christine Todd Whitman may take that Duke of Wellington profile right into the Oval Office. (Paglia) 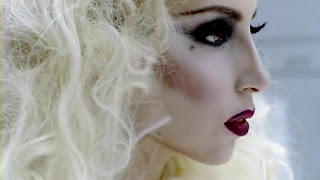 Gaga has borrowed so heavily from Madonna (as in her latest video-Alejandro) that it must be asked, at what point does homage become theft? However, the main point is that the young Madonna was on fire. She was indeed the imperious Marlene Dietrich’s true heir. For Gaga, sex is mainly decor and surface; she’s like a laminated piece of ersatz rococo furniture. Alarmingly, Generation Gaga can’t tell the difference. Is it the death of sex? Perhaps the symbolic status that sex had for a century has gone kaput; that blazing trajectory is over… (Paglia)

Lady Gaga - who, I think, makes some wonderful pop songs - is "of her age" in a way that the poor provocateur Camille Paglia may not "get" inasmuch as Gaga's whole schtick involves the anticipation of their complex, contradictory, and perhaps overemphasized interpretations (as with reversible films). Aside from the best hooks in contemporary pop music that I know, outside of the New Pornographers & La Roux (not that I'm an expert or even a good pretender to such a thing), Gaga's music and her personality are interesting in that they are aware of the "think pieces" that are to have been written about her. It's not that she's not shallow, or still a mere product of the spectacle, but she's so in a way that deserves a certain amount of credit ...
Posted by ZC at 7:07 PM

Now that I think about it a little more, somewhat interesting how Paglia criticizes Gaga for apparently betraying or ignoring her Italian ethnicity, but gives Madonna - who doesn't seem to have done much with her "Italianicity" save to use it for a few Roman Catholic target practice sessions - a pass in this regard ...

Gaga's 'prominent nose,' and her facial features in general, change based on her project & make-up, and can be either quite prominent or rather subdued.

I disagree about Gaga -- she's more like false symbol that people overly complicate. It's certainly interesting to see Paglia recognizing Gaga's attempt to mimic Madonna's career. It's like the late 80s/early 90s repeating itself. Gaga, like Madonna, does seem ripe for a lot of boneheaded media/gender scholarship that Paglia produces. I don't know how she managed to get her work published. Sexual Personae was a meandering and poorly written mess, but I guess there's an audience for drawing neat-o connections between pop culture (Elvis) and highbrow culture (Byron).