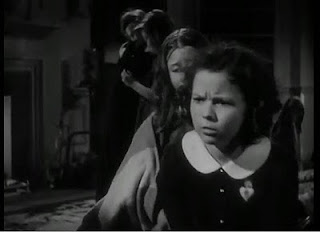 (Image h/t to Andy Rector's Kino Slang post on the film from a while back, in the comments section of which you can read him and Miguel Marías discuss Allan Dwan movies.)

Premised upon the most treacly New Deal propaganda you can imagine, Young People (1940) is a Shirley Temple movie with the superb talents of Jack Oakie and Charlotte Greenwood, playing her adopted parents. The trio is a stage family intent upon giving up the vaudeville life in order to raise Shirley "normally" in a classic American town. However, once the Ballantines get to their idyllic New England town, they quickly and obliviously decide they know what's best for everything, and their first night in - during the town meeting - they side with the town's dynamic "young people" contingent - against the mean, stingy, stodgy old farts who oppose progress. By "progress," the film means that the old folks oppose, essentially, a voluntary WPA-ish program to stimulate the economy in their town: industrialization, tourism, and so on. They oppose this because they are geezers and marms who don't like to have fun, which is really what they need to do in order to implement a more open sociopolitical program in their town, courtesy of a sub-quasi-Wilhelm Reichian solution. Meanwhile, the Ballantine family flips between being utterly charming (for us as viewers) and nosy, boorish 'accidental elitists' (to the old citizens of the community). The moral: Anyone who opposes the New Deal programs - although explicit references to partisan politics or policy in this film are fairly tame & vague - is, obviously, old at heart, blindly traditionalist, pessimistic, no fun, cruel, snobbish, and exceedingly petty.

Why is any of this the way it is?

OK, so the film is addressing children (in part), but why is the political component of the film also motivated by a logic as absolutely simplistic as the standard storyline logic of rebellious young kids vs. old codgers? Young People is utterly devoid of social criticism on even the most basic level: as a political movie, it seems to me, it is entirely a flimsy bit of propaganda for voting (thoughtlessly) in favor of the party which most loudly trumpets what it brings is Progress. Progress, of course, is imagined here solely as economic stimulation by way of government assistance and oversight. (That, and ensuring that the village elders give ample space to the twentysomethings, and also allow the kids of Shirley Temple's age to perform vaudeville routines and not just sappy choir numbers.) There's no such thing as race, class, or capitalism in this world; politics reduces to character flaws, and the way to solve problems is to barge through them - so long as Progress is on your side.

It is not as though Hollywood was incapable of making films that evinced the admittedly stereotyped - but not necessarily wrong, and in my eyes far more sympathetic - code of small towns and tough neighborhoods that you have to earn your place in the community over time, and work your way toward the respect of the citizenry. This is how organic communities work, how they develop and (yes) change - it's partly why John Ford's films are so richly realized, because he & his collaborators know something about how to sketch lively communities (families, towns, nations, all complex networks of interrelation between materiality & mythology). But Young People's political program makes Dr. Quinn, Medicine Woman look like a model of both balanced portraiture and cutting criticism. Both objects work under the banner of triumphant progress, but the latter, at least, nods in the direction of slowly built community ties (Michaela Quinn has to get her tooth pulled - unnecessarily - in the first or second episode to earn the respect of the townsfolk), and also provides at least initial awareness of those differentiations of the social body such as class and race.

So again, I ask, why is any of this the way it is? Having done no research toward answering the question, I am still provoked by this movie to ask why, how, for whom it was really working. Did anyone buy its "message" in 1940? Or today?

If I'm hard on Young People here - a bonbon, a Shirley Temple movie, a sentimental musical comedy - it's primarily because it so nakedly portrays something I dislike about the industry and the system which produced it. However. It's also quite an impressive film in many ways. If you look at the camerawork from the opening stage routines here, for instance, you'll see some assured filmmaking. There's a scene where Jackie Oakie rouses Charlotte Greenwood out of bed under the ruse of their having to catch a train - but the five-second reaction shot of her in the bathroom, when she realizes it's a joke and that she's "home" for the first time in her adult life, is a wonderful bit of synergy between actor, director, and editor. Greenwood - what a delightful actress! I could watch her in a film a day for weeks on end, though I think I must have only seen her in five or fewer films at this point ...
Posted by ZC at 9:14 PM