A while back I caught up with a critics' favorite, Children of Men, about which I can mostly only muster very bad things to say. (Disappointments like this are what, in part, prevent me from staying as comprehensive as I could be on the apparently important new releases each season or year.) Tripping over itself to make hackneyed decisions as quickly as possible - most of the time - Children even goes so far as to have a baby who conveniently never cries ... until of course, it is narratively convenient for the sound of a crying babe to touch the humanity deep within the military-industrial complex, and cause soldiers to lower their weapons. What point is a dirt-smudged face, or the glorious thrill of depicting a "radical underground," in the face of such illusionistic wish fulfillment?

Of course, to be too disappointed in Children of Men would probably be to give too much credit (or at least the wrong kinds of credit) to the system which had produced the film. A lot of my problems with Children stem not from the film being incompetent than from my utter distaste for its organizing principles, which precede and will outlive it. Only a poor, callow sort of masochist could truly (a) exhibit the rudiments of a taste much superior to the Hollywood companies, and also (b) continually let the jaw drop at failure to live up to these standards.

{ - Hollywood produces a steady trickle of decent middlebrow films, and puts out a fair number of good genre films. Of course, Hollywood also bleeds into non-Hollywood in these respects, e.g., the EuropaCorp family, which is working wonders in putting out vulgar/ian beauties. Who could deny that any one of the Transporter movies is far, far better than most films that get nominated for Best Picture these days? Even Taken - which is basically EuropaCorp consuming zombielike, shamelessly, a D.W. Griffith purity narrative - has its fine efficiency of storytelling, competent performances, and fewer impulses to make a solipsistic trendy mess of itself than a lot of big-budget films. The number of real Hollywood masterpieces the past decade is shockingly low, though, which is why the people who early on pointed to contemporary television as (at least) the US's closest industrial a/v equivalent to classical Hollywood were, we must admit, quite correct. - }

One of the problems with a film like Children of Men, then, is not so much that it fails on some level of realism, as that it feints toward certain kinds of realism (sociopolitical "hardhittingness," like a TV current affairs show in thick black eyeglasses) by means of the scaffolding of sheer fantasy ... the fantasies of grime, privation, and dystopia that are well-worn in Hollywood storytelling.

Related points, on another movie (one I haven't seen yet): 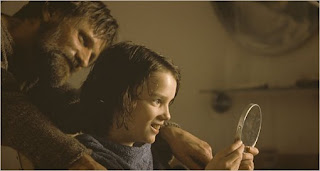 "A look at the above production still shows that the people who make these films haven’t a clue what dirt, grime, poverty or desperation really look and feel like. The trailer showed more of the same – again the fraudulent clothes out of costumes, theatrically gritted up but nothing like what a pair of pants worn a week on a farm look like, much less the endless months McCarthy’s book depicts. And ditto for the burnt out cars, wrecked towns, and the glowingly lit skin of our protagonists." (Jon Jost)

Recent promos for CNN International's "Beyond Borders" have irked me in their smarmy, privileged shallowness. Always, the modernist-enlightenment call to progress, innovation, going beyond borders, a new perspective. Delivered with sharp suit & glasses, a British - or, if American, moneyed - speech (a sign that you're not one of the Fox News faux downhome anchors), and an earnest gaze. And then, after the fearless call to go beyond, we get ... the soundbite.

Of course, as with Children of Men, to be too disappointed in this is to risk the foolishness of granting too much credit to begin with.
Posted by ZC at 9:11 PM

I've seen CHILDREN OF MEN twice and thought it was okay - I had a similar accepting-but-not-praising reaction to THE DARK KNIGHT, THE DEVIL WEARS PRADA, NANNY MCPHEE, and others. I guess it rubbed you the wrong way!

Jost's comments regarding THE ROAD feel a little misguided, though, since he's taking that still out of context, and if he knew the context, he might not criticize the lack of authenticity with such certainty.

I feel the need to rescue THE ROAD from its less-fortunate company, here: to me it's a great film, by a director who is in full possession of his faculties. I cannot say this about Cauron, who impresses me more as a producer (marshaling the forces of technicians, computers, set builders, and so on) than a filmmaker (who marries image with sound). Perhaps you may not like it if you see it - I've actually not been able to find anyone who shares my exultant view of Hillcoat or his film - but as I staggered out of the theater, my emotions completely in turmoil, at once elated by the great and terrible beauty of the artwork and in a state of despair over what it depicted, and how, I cannot say that I worried too much over the genuine-ness of the grime and squalor. To me it was as great as SANSHO DAYU, and that is no exaggeration.

Yeah, since I haven't seen The Road I don't know, of course, whether I agree with Jost or not, but when I read that tirade I felt that - on an abstract level - he was speaking to a serious problem! That he had The Road in his sights, or that he may or may not have been right-on about that film, is less important than the grievance lodged against a practice, which is (in general) a problem.

In the case of Children of Men, I'm not disappointed by its failure to be truly 'realistic' or 'coherent' so much as the framework that I think the film builds, and presents, for its grit ... a neoliberal smugness that mimics war journalism and in the process seems to forget how narrated & sensationalized journalism itself is. It's like Children of Men isn't shrewd about these little things - whereas Time of the Wolf (apocalypse) and even the 'shallow masterpiece' District 9 (journalism) are very, very shrewd.

A friend of mine made a good point that the movie (Children) was rare in that it doesn't present militarism heroically or in a fascinating light - and I think that's true, and an example of something that the film does that shows some thought. But at the same time, who is the demographic for this movie? I imagine largely educated liberals who don't like - in principle - the idea of a movie that "promotes" militarism. I wish the film had also extended the same basic thoughtfulness towards its dealing with the image of the underground resistance - a tired old story about the lapsed idealist, and awesome secluded hippie dens, and finding meaning through social change (which only the adult white male can ultimately foster, "crazy huh").

I'll try to see the Hillcoat some time soon. That's a big recommendation.

Maybe try THE PROPOSITION first, which I think is still on Netflix Instant.