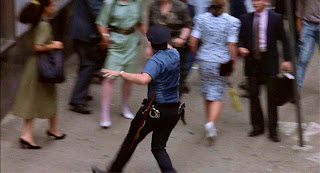 The detail. Above: sweat stains on the back of the policeman's shirt after he's just exited the car (in Quick Change, directed by Bill Murray and Howard Franklin, 1990). I would be highly surprised if a "detail" like this were ever allowed to make it into a movie like, say, The Dark Knight, even though gritty "details" - and the posturing that underscores such grit - are a cornerstone of the appeal of the contemporary Genre/A films.

The unremarked-upon sweat stain is the sort of detail that can anchor an image to reality; it might coax us (viewers) to project that reality, to begin or continue to wonder what it is, to hold in our heads a relation between the image & the world. The scenario may be ridiculous or fantastic, but there is a corporeal or sensuous link that remains which is erased by an image scrubbed too clean, where one can't imagine (or is not led to imagine) the feel of cloth upon the body, the humidity and odors of a hot city street, or the taste of a hot dog from a sidewalk vendor. It's the difference, to me, between visions of civilizational collapse as seen in Children of Men and Time of the Wolf: two critical darlings, the former being (in my eyes) a horrendously bad film, and the latter being a quite good one. Part of the difference is that Haneke's movie tries to imagine and think through the sensuous and emotional terrain of civilized people living through the crash, a day at a time. The characters in Children of Men are going through a theme park version of a crash, it seems to me. (More on this particular point in a forthcoming post.)

That these aspects of the world are often jettisoned from cinema is just a fact of its history, and of its continuing practice. The power to ignore all such things and yet still aspire to any sort of realism, a kind rhetorical access to reality, is one level at which cinema operates "ideologically."
Posted by ZC at 10:47 AM

So, during the pre-digital days, detail was detail, and now, it's "detail"?

One thing I miss about films: the artificial effects that now seem only to inspire derision and spoof. Rear projection, shooting on sound stages, split diopter process shots, etc. As much as I liked THE GHOST WRITER, I had very recently watched THE NINTH GATE on Blu-ray, and lots of the "false" effects (a soundstage New York that could easily have been used by Kubrick for EYES WIDE SHUT) in that film felt more tactile than the green-screen environments in TGW. (Although, to be fair, the latter had a grand appearance by Eli Wallach, may he outlive us all.)

(Well, I had a long response typed out, but didn't save it, and when I hit 'post,' Blogger ate it. Damn. I'll try again a bit later.)

"I hate it when that happens."
Don Draper

So, Jaime, to address your first question - it's not as though details disappeared with the digital (e.g., there weren't sweat stains in plenty of glamorous Dream Factory productions of yore), but the particular stance toward the markers of the real has changed.

I feel that in a lot of contemporary fantastical storytelling - something like my whipping boy The Dark Knight (but really it's not a movie I dislike that much; I definitely prefer it to Children of Men) - is a matter of debunking. Over and over again we see, in fantasy stories, things like magic or dragons are derided as "just children's tales," until it's true. Or in Kick-Ass, as I'd pointed out here previously, that nadir in the film when the narrator says (in, to me, a complete betrayal of any kind of 'taste' worth having) 'Oh, don't expect me to survive this ordeal just because I'm narrating the story' ... and then survives the ordeal. Or, in Dark Knight, the appearance of the noble lie ('the hero Gotham needs') as some kind of an obscure, revealed truth. Again and again, the mechanism of 'debunking' (which Bruno Latour says is a crucial part of our conception of modernity) is essentially used as a plot device, a quick & convenient thematic "springboard."

My quibble, such as it is, is with those who would continually to take such thematic somersaults at face value, to never consider them as mechanisms but only as 'depth.'

My hunch is that the process of debunking is tied both to slowly changing codes of realism, and also the way that aesthetic/technological innovations are processed and then domesticated as realism. So the history of things becoming, looking, dated is also in part the history of details slowly disappearing, or turning into "details."

Realism in the cinema depends less on the flaubertian or balzacian -- let's call it homely -- detail than in reference to an entire history of filmic representation. What is real in the movies is always in strong erotic(?) relation to another image. Implicit in a strong image is the love for an earlier one. The way one can't experience Rossellini for instance without hypertexting to Chaplin. None of this is articulable explicitly -- it's never at the level of an "hommage", because such crude obviousness would shatter the dream-signification of the film. And this is no small part of what Barthes calls the Third or Obtuse Meaning in the cinema.

Moving parallelly into the structures of narrative, what you are calling debunking is the opportunity for the spectator to flex her vast knowledge of the codes and draw pleasure from the overlays. This is nothing new, really. Don Quixote depends on the same "subversive" tactic (a mocking familiarity with knightly tales) and a flux between the dirty reality and the Don's vast imaginative capacity to distort it. Post-Auteurism is a Quixotic operation in this way. We take an unexceptional factory film and we look between the cracks for ruptures, which give us pleasure.

And this also justifies a low or no-affect position -- "the ideology of cool" -- a conditionally suspended disbelief, towards the ontological status of the narrative. We are the sum of stories we believe about ourselves, but the modern subject can't ever be certain enough about their status to wholeheartedly endorse capital N narratives. The modern subject is paranoid & unconfident -- faced with a semiotic stew in private life where every object and image, like a politician on the stump is making some kind of private appeal to his identity -- the default position of the subject is fending off affective response. So Today's artist has to ritually genuflect to the paranoia, and assuage some of that anxiety before throwing the magic dust in people's faces. and letting them dream. Debord: "To the extent that necessity is socially dreamed, the dream becomes necessary. The spectacle is the nightmare of imprisoned modern society which ultimately expresses nothing more than its desire to sleep. The spectacle is the guardian of sleep."

And so Zach, this is all as a lead in to say that you have to go (if you haven't already) see Inception where Nolan, in a Wellesian way has foregrounded all these structural elements to frontload and short circuit the audience's paranoia to better take them, like the protagonist into dubious areas of belief.

And this also justifies a low or no-affect position -- "the ideology of cool" -- a conditionally suspended disbelief, towards the ontological status of the narrative.

Yes, and it's a 'hot cool,' inasmuch as this continual gesture of referentiality (a generalization about cinema & narrative meaning-making I don't dispute) becomes, itself, foregrounded in the narrative (on, indeed, the level of homage, but an "anti"-homage), but then disavowed as a narrative mechanism. It conceives of itself only as a "stance." (In other words, a kind of dishonesty of the position of the modern subject, as you put it, toward its own crises.)

As for Inception - please say more, anonymous commenter! I saw it. Have little of depth to say about it, yet.

It's not a great movie. It's an interesting one. I see Inception as a pop cousin to the Assayas genre films; Demonlover, Boarding Gate; & New Rose Hotel, of course. Films about the utopia of Transnational Space.

Modernist asceticism, though a good sell, is too puritan for the main in consumerist society. But the ever-changing abstraction of modern commercial space "the space where anything could happen..." is a different sort of spartan option that serves capitalism even better.

Nolan, with his hackneyed pseudo-feuilladian tricks, takes this all to a sort of deceptively literal absurdum where dream space becomes the natural battleground of capitalism. The colonization of dreamspace itself by this Masumura Black Test Car universe. What's amusing in the movie is how the dream space, like it's counterpart in the real world, has this absurd freudian obsession with rules and regulation. It's not Peter Ibbetson. This is the most boring, corporate dream world imaginable. And I think, that may be the, perhaps, unintentional, point. I think that the cynicism is obviously boundless here, but the poetic image mostly holds for me.

I also like the madness of the parallel cutting between the dreams, and the beautiful, endlessly protracted van crash sequence.

Quick Change is an interesting movie to focus in on to make this point. I've had a similar feeling while watching John Avildsen's The Karate Kid: there's an unselfconscious awareness of the real world that seems lacking from almost all contemporary Hollywood filmmaking.

However, reading the post and the comments, I started thinking about Wendy and Lucy, where it seems to me the problem is the opposite extreme of Children of Men's: "realistic" details that are deployed to depict an emaciated version of the real world - a reduction rather than Children of Men's exaggeration.

Anyway, these posts have been quite thought provoking and I am following them with great interest.

That's, incidentally, my favorite bit of INCEPTION commentary - a film that I liked - although I agree with some of its detractors about certain liabilities in the story, in Nolan's direction...

Anonymous, another interesting thing about Inception, I think, is that despite its 'cinematic' size & scope, and its imax pedigree, it reminded me of nothing so much as (certain strains) of quality network TV: moderately clever, logistically ambitious, very slick and easy to watch. (But, like the few episodes of Lost I've seen, it hasn't stuck with me at all.) As for the transnational utopia - yes, I think that's an illuminating context. These characters move through spaces (stereotypical sets & settings) but are never from anywhere, geography in Inception seems to be purely a function of one's mentality or of the marketplace. (Or bureaucratic red tape. Which, either way, the proper channels of authority can circumvent, which I suppose is part of the film's background "points.") Except where the figures in Ferrara/Assayas are enmeshed in the consequences as well as the thrills as there is no 'outside,' no emancipation, in this so-called utopia - Inception's characters just jump through various levels of consciousness or whatnot, like the computerized levels of (sur)reality in The Matrix movies.

Jon, I chose Quick Change precisely for its randomness - I was watching it, noticed the detail, and decided to jump off of it. (On Karate Kid, I wrote a few words in this old post that may dovetail with your own feelings.)

Jaime, that picture is fantastic.

Zach wrote: "Inception's characters just jump through various levels of consciousness or whatnot, like the computerized levels of (sur)reality in The Matrix movies."

One last thought, which is blindingly obvious in retrospect -- that the whole thing might have been conceived as a Myst-like video game tie-in. The rules, the levels, etc; it's not being meta about movie storytelling, but about gaming.

This can't work in fact, that is exactly what I consider.