It is a great tragedy that snark should house virtually any critique of the art world these days. 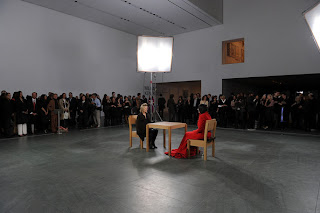 Between snark and hagiography, what decent choice does one have? Nothing works now (if it ever did). When Godard & Gorin made Letter to Jane after Tout va bien, their ungraciousness toward Fonda nevertheless posed some crucial political questions: what is the image of concern, and how can the image stand in for the real thing? Is there a real thing or have we only images in the face of the dooming structural monstrosities of capitalism, colonialism, and coercion? As with the concerned public figures analyzed by JLG & JPG, we see again and again the same thing (despite all differences) in Marco Anelli's photographs of Marina Abramovic's performance piece The Artist Is Present. This is the image of the sensitive observer. The emotionally open person. Artists, certainly a lot of artists. (Paco Blancas: "Also, I love meeting people in line. I’ve met a lot of people and have made a lot of new friends, many of them artists, but really all sorts of people.")

Abramovic to her co-present observers: 'let me be your mirror.'

The cultural spectacle of this performance piece, documented by Anelli and disseminated over the Internet for some time now (the run ended on May 31), may be my own mirror, and perhaps I will read into it my own problems well foregrounded before anything else that might concern anyone else. So be it. Still, amidst all these sensitive, moved, moving, tear-stained faces who've gone to sit and be with Abramovic, I notice, also, that so many of these observers indeed have good haircuts (and certainly not too many boring good haircuts). I cannot help but feel that, were I at a party with most of these dedicated observers, I would be invisible to them.

It is a strange and off-putting position - imagining having one's hard-earned nobrow passport denied - subtly denied - because one can't imagine integrating smoothly into a circle. (This circle of artist-observers.) But once my pouting and my sense of entitlement subside, I am left with further musings on the importance of the space-specific or time-specific art. Part of what is wonderful about ephemeral art, and art given to obsolescence or scarcity, is that wrinkles and re-crinkles the smoothness of an enormous, public projective space (i.e., the dream of mass culture as seen in the nightmares of the Frankfurt School). Put as crudely as possible: it makes things less boring by re-introducing chance & difference to the legacies of Fordism, Taylorization, mediation, and spectacle.

Cinema's relation to space-specific and time-specific art is a frequently-overlooked component of cinematic ontology and cinematic possibility - and, with respect to physical decay, what film is. (Though I would reformulate my arguments - which weren't so well-made - and come to somewhat different positions on certain points, I still more or less agree with the thrust of my three posts having to deal with this in 2006 with respect to Sátántangó - 1, 2, 3.) The art-event which, necessarily, some people will miss (like perhaps a film screening) bears seeds of inequality. But at the same time it introduces an awareness - perhaps a cutting awareness, like my own subdued adolescent pouting at not being like the sensitive aesthetes who were able to weep so beautifully, and with such LES-friendly clothing & hairstyles, at being-with-Abramovic. This awareness is of the disguised limitations of our own assumptive privileges, the thought that we are citizens born to a utopia of artistic access. Yet what ever provided us with these illusions? The entire broken system of modernity.

I like the idea of cinema existing also as a network of legends about films no one is any longer able to see, or is unlikely to see, but whose example may nonetheless spur thought & activity. In an Abramovic-like vein is (it seems) Sylvina Boissonnas' Un Film, about which Nicole Brenez has written beautifully:

The producer and leader of the Zanzibar group was Sylvina Boissonnas. She made only one film, simply titled Un Film, in 1969, an absolute masterpiece so singular and emotional that she has forbidden any screening of it. I have had the great privilege to see it; it is the most simple set-up one could imagine. Sylvina herself, wearing a white dress, stands still at the bottom of a round vat with the camera pointed at her at a right angle. The film is made of sequence shots of ten minutes each (the equivalent of a reel) over the course of which tons of water, sand, stones are poured into the vat, burying her for long minutes at the end of each of the shots. For Sylvina Boissonnas, this was an image of pure depression; for the viewer, it is one of the greatest performances in the history of cinema, one in which the author risked her life several times. It was filmed in 35mm. by Armand Marco, a cinematographer who also worked with Godard and the Dziga-Vertov group.

And thus my dissatisfaction with both snark and hagiography. Neither one can deal with difference; neither one can hold the gnawing horrors of that privileged playground, "the art world," at arm's length and still think through, think with the work itself. My dissatisfaction, too, not at all with The Artist Is Present, which I obviously did not visit/see/be with, but perhaps with what I intuit as the usurpation of cultural gnosticism (all its fun, all its unevenness) by the meaningless, instantaneous opinion-mongering of a web-connected context who proffered this entire thing to me as a sensation, prior to all experience. I don't have the experience, but I get the preview and glimpses of the remix.

I'm sure it would have been fantastic with Tracy Morgan, though.
Posted by ZC at 7:16 PM

Zach - This really brilliantly gets at something I felt at the Abramovic show, regarding duration, performance and ephemerality in relation to the moving image. While I didn't stand in line to sit in front of the artist present, there was a strange way that my response (and the horizon of possibility of my experience), by virtue of the precirculation of others' mediated responses, was already necessarily scripted: the images of tears, being moved, enervated, but also momentarily belonging in an event-as-scene. "Being there" never meant so much, abstractly and in terms of cultural capital.

But actually experiencing the show was a site of utter distraction - the pieces were all so close together, the moving image works and documentations of the "original" performances all yelling, clashing and colliding with each other sonically and otherwise. If the show was challenging the model of performance as ontologically ephemeral, the surfeit of documents, images, and archival remains of Abramovic's work in some sense cancelled each other out, all buzz, noise, no singularity. The infernal crowds in the museum space and the crowding of the work itself. In particular, I longed for a black box in which to experience the video of the mouth to mouth/asphyxiation piece, in some simulacrum of isolation or contemplation.

Perhaps snark and hagiography are two logically extreme poles, each a way to deal with the same problem - how do we engage with performance when it becomes no longer ephemeral, when it enters the sphere of capital circulation and becomes material in a mass cultural way? It seems that we have both the pre- and the post (your last line alludes to this) - but not the work itself - which is maybe what I was yearning for in wanting to screen the videos of the original performances and at least experience, if not the presence of bodies, but at least the bodily impact of their duration, in solitude and sincerity.

The (almost)end of your post reminds me of how many filmmakers must be reading about movies they've never seen, maybe will never see, and interpreting what they read in a very different way from intended... but with interesting results. How much creative activity has been spurred from, say, a "misreading" of a Dave Kehr Chicago Reader capsule on a film never widely distributed? And what role does criticism play in such a dynamic? Maybe just to remind a filmmaker that a certain film's technique had a certain effect, and thus to encourage them to use this effect - which, without having seen the film in question, making an entirely different film, is bound to be a misinterpretation (or a more perfect interpretation) of the critic's actual words. If filmmakers were required to read about films versus watching them, I wonder how the state of cinema would change.

Sorry to respond so late, everyone - I had to put my free time on hold last week, and then had to let my brain recharge a bit this week. Thanks for the comments.

E., yes - and I suspect that the imagination of oneself as spectator (or audience) is a crucial point of the show, and a crucial point of circulating audiovisual culture. To preserve performance art (a meta-theme of the Abramovic retrospective, according to reviews) is also to invite some kind of encapsulated negotiation between experience and commodity form.

Joel, I remember forming entire imaginary aesthetics reading about certain films and filmmakers, especially in my youth. I think the first time I read about Bresson, for example, was when I was about 14-15 and Roger Ebert wrote about A Man Escaped - though I was not precocious in terms of cultural capital, I look back and think I certainly was precocious in terms of allowing film art its longeurs. (To this today, this temperament of mine is why I balk at anyone who spews nonsense about what cinema "naturally" means to us, or how narrative is "naturally" what we crave in cinema.) Because Ebert's description of Bresson made him seem so austere, so slow, and so dry to me (or rather I read these remarks to be this way) that in my head, before I saw any Bresson a couple of years later, RB's cinema was literally a kind of slow-motion, sepia-toned (yes!, I know, WTF!?), narrative-free head trip.

In fact, now that I think of it, the closest 'filmmaker' to my initial imagination of what Bresson's films must have been like is, in fact, William Kentridge - except live action instead of animated.