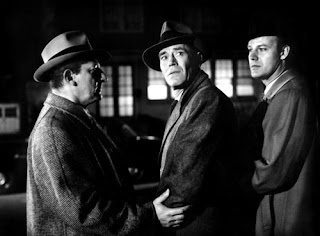 "Who's Joe?" they ask in Only Angels Have Wings. Joe - forgotten - is never really forgotten. He haunts the film, he is honored by people in their own ways, even among a people who do not explicitly honor memory. Poor Manny in Hitchcock's The Wrong Man, on the other hand, is precisely the opposite kind of forgotten man: victim of a bureaucratic oligarchy (which is what we live in in the US - not a 'democracy'). Explicitly remembered by those around him, he is quickly made to be missing by the powers exerted by bureaucracy (silence, procedure, leverage). He vanishes for a while, a living phantom.
Posted by ZC at 9:18 PM

I invite you to see my post, I hope you will find interesting too.